Red and Blue Run will replace Double Decker Run for 2021 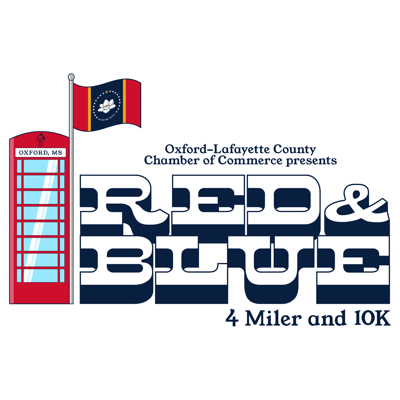 In-person events will return in 2021 to Oxford, although they may operate a little differently. While the beloved Double Decker Festival and its related Double Decker Spring Run has been canceled again for this year, the Oxford-Lafayette County Chamber of Commerce announced this week it will be hosting a brand-new running event instead.

The Red and Blue Race to the Square will be held on Saturday, April 24. The event is a trio of races: a 10k run, a 4-mile run and a 1-mile run. The event will be limited to 1,000 participants and steps are being taken to limit in-person interactions with the course allowing for racers to spread out throughout the course of the race and at the finish, said Pam Swain, Oxford-Lafayette County Chamber of Commerce Senior Vice President.

The course will be different than the route run for the Double Decker race, said Swain. With the festival being cancelled, racers will be able to run through the Oxford Square.

“We are following all the safety guidelines we can for this,” she said. “We are starting to hold small events and being able to hold one to this magnitude is something we have just been waiting and waiting on, we are so excited.”

Racers are being asked to register online, with those who do so at least two weeks in advance, receiving their racing bib with chip via mail. Racers will be given a start window and as soon as they cross the start line their chip will begin tracking their time.

“All they have to do is arrive and start running,” said Swain.

When they are finished, racers’ times will automatically be uploaded on to the race website. will be able to check the site to see if they have won an award. If so, they can swing by the awards tent to pick it up. Although the Red and Blue Race will be a different event than the traditional Double Decker Spring Run, which would have celebrated its 24 years last year, runners can expect the same great volunteers, professional race management from Start 2 Finish Event Management and memorable awards and medals.

Racers will also pick up their prepared race bags, which will include pre-packaged snacks, race t-shirts and other goodies, with little person-to-person contact at the end of the race. While racers will be asked to wear a mask at the start and after the race, once on the course they will not need to be masked, said Swain. End of race photos will be available and racers are encouraged to show their spirit by wearing red and blue.

NE SPARC is the presenting sponsor for the Red and Blue Run, which organizers hope will kick off a slate of socially-distanced spring and summer programs. Swain said the Chamber relies on its fundraising events to bring in funds for programs. Over the last year, it has had to cancel three of its major events.

“It hit us significantly, it will help us recoup some of those loses and prepare for the coming year,” said Swain.

She said the committee hopes the event will attract locals as well as out-of-town visitors who will be able to take advantage of other outdoor events happening that weekend including the Red and Blue Spring Ole Miss Football Scrimmage, as well as the Ole Miss Baseball Team’s series against Louisiana State University. The Chamber will also be teaming up with Visit Oxford to offer some additional events.

Any runner who was a paid entry into the 2020 Double Decker Spring Run will receive a credit code to register for the Red and Blue Run.