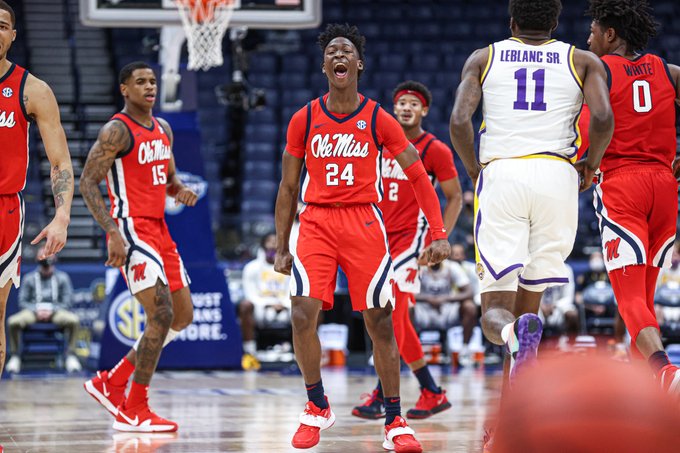 Ole Miss guard Jarkel Joiner reacts during the game against LSU in the quarterfinal round of the SEC Tournament at Bridgestone Arena in Nasvhille on Friday, March 12, 2021. The Rebels were named the No. 4 Replacement team for this year's NCAA Tournament. (Joshua McCoy/Ole Miss Athletics)

The Ole Miss men’s basketball team was not selected in the Field of 68 for this year’s NCAA Tournament, but they could still need their dancing shoes.

Following the announcement of the tournament’s full field, Ole Miss was named one of the First Four Out and the No. 4 COVID-19 replacement team.

Louisville, Colorado State and Saint Louis are three teams ahead of the Rebels. Should a team be unable to travel to Indianapolis and play in their scheduled first round game, one of the four replacement teams will receive their spot. The deadline to be selected as a replacement team is Tuesday.

The Rebels put themselves in position to find themselves in their second straight NCAA Tournament. Last year’s was canceled due the start of the COVID-19 pandemic. A win against LSU in Friday’s quarterfinal round of the SEC Tournament would have all but locked Ole Miss into one of the final spots, but the Tigers edged out a 76-73 win.

After earning one of the replacement spots also ensures the Rebels were named a  No. 1 seed in this year’s National Invitational Tournament (NIT). The Rebels will play No. 4 seed Louisiana Tech in the lower right bracket. The NIT Tournament, which was reduced from 32 teams to 16 teams in 2021, will begin first round games on Wednesday.