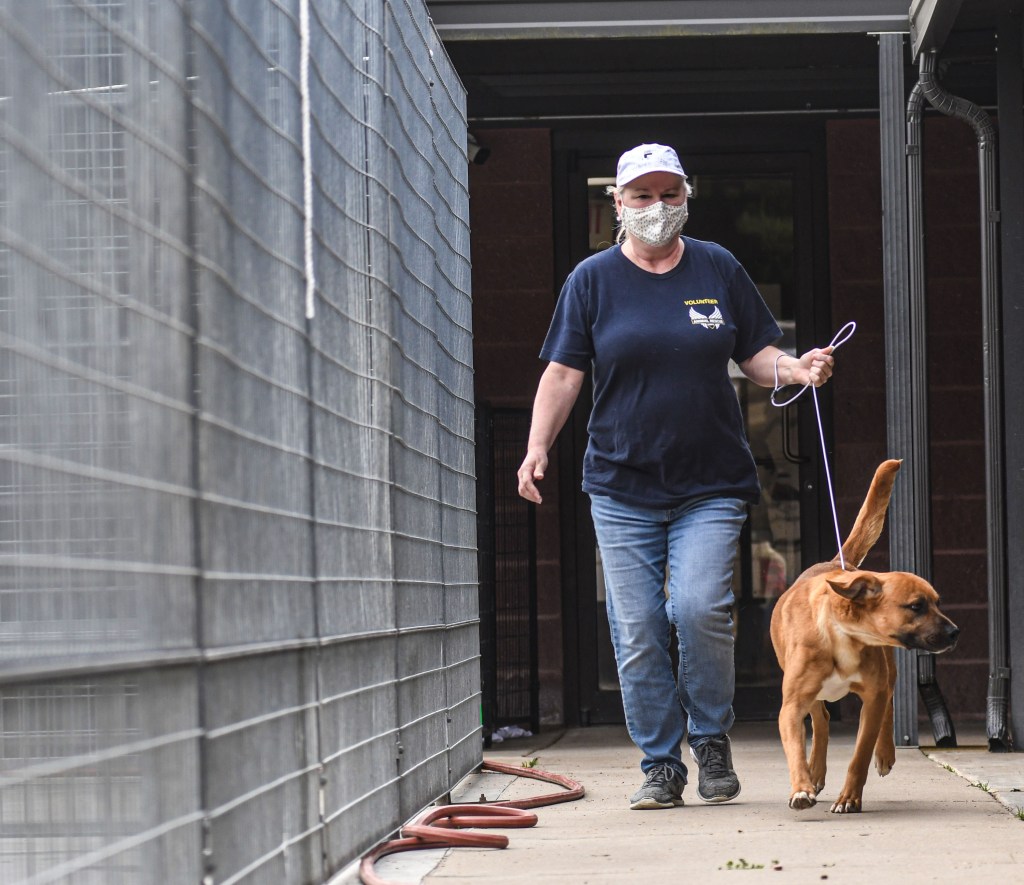 Anne Hathcote with the Animal Rescue Corps walks a dog out of the Animal Shelter in Oxford, Miss. on Tuesday, March 16, 2021. (©Bruce Newman)

National nonprofit Animal Rescue Corps and the city of Oxford are collaborating together this week to safely and efficiently relocate 45 animals after the city’s animal services contract with Mississippi Critterz was ended.

On Tuesday, transport procedures were initiated at the shelter.

Responding to public concerns about adequate animal care surrounding the nonprofit organization contracted to manage animal services, the City of Oxford announced last week they would be terminating the contract and temporarily closing the Oxford Animal Shelter as soon as a solution could be found for care and placement of the animals currently at the shelter.

According to a news release from Animal Rescue Corps (ARC), a national nonprofit animal protection organization that specializes in assisting communities with large-scale animal issues, ARC became aware of the efforts by the Mayor and Board of Aldermen to act quickly in the best interest of the animals and the need for urgent placement of the remaining dogs and cats currently awaiting adoption. Animal Rescue Corps reached out directly to Robyn Tannehill, Mayor of Oxford, to offer assistance.

‘This is exactly what Animal Rescue Corps is designed to do,” said ARC’s Executive Director Tim Woodward. “We respond quickly and humanely when communities have an urgent need. It’s a privilege to assist the community of Oxford; the mayor and her team have been incredibly responsive and dedicated to finding the best solution for Oxford’s cats and dogs.”

According to ARC, in the past decade, it has become more common for cities and counties to contract with non-governmental organizations to provide animal services for communities. In many cases, these organizations are well-funded and well-managed and public-private partnerships are often successful, better meeting the needs of both animals and citizens.

Bushby told the EAGLE he witnessed several areas of concern, including dogs being kept in cages so small that they were unable to stand up fully. When questioned about the cages on March 8, Smith stated that the issue had been addressed and corrected.

The same public outcry that spurred Bushby’s visit and the subsequent closure of the shelter began with a criminal investigation after photos of neglected animals were shared on social media on Feb. 16. However, no charges were filed at that time.

The findings of the investigation, conducted by the Oxford Police Department and Lafayette County Sheriff’s Department, are now in the hands of the District Attorney’s office.

“Our community cares deeply about animals and it’s wonderful to know our animals will soon be in loving homes, thanks to Animal Rescue Corps,” said Mayor Robyn Tannehill in the ARC release. “Closing the shelter temporarily is an unfortunate but necessary step to ensure that we are meeting the needs of the animals with a compassionate standard of care that makes our community proud. The help we are receiving from ARC will ensure that Oxford’s animals swiftly find placement while receiving world-class care.”

ARC is transporting all remaining animals from the Oxford Animal Shelter to the ARC Rescue Operation Center outside Nashville, Tenn. There the animals will receive medical exams and daily care until they are matched with ARC’s North American network of placement partners in high adoption regions.

Pilgrim, a young adult male dog with mobility issues, is just one of the dogs expected to be transferred from Mississippi to Tennessee this week in what is being called Operation Fresh Start. Pilgrim, described as ‘happy go lucky,’ walks with the assistance of a dog wheelchair, and will be matched with an ARC placement partner that is well-versed in special needs canines.

ARC will post a list of Operation Fresh Start placement partners on their Facebook page once the animals are placed. Visit animalrescuecorps.org for more information about ARC’s work.