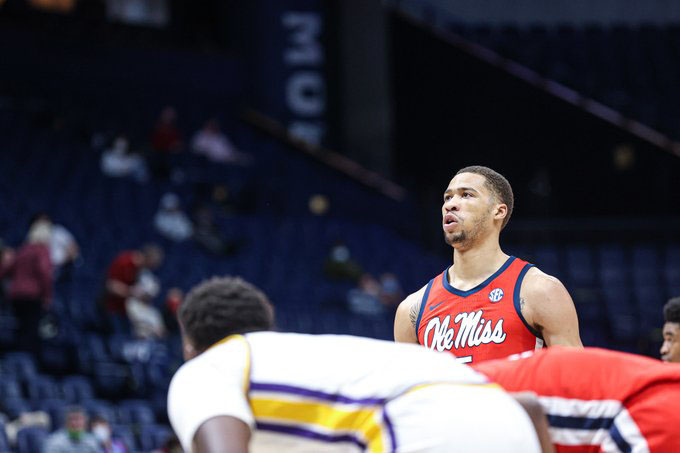 Ole Miss forward KJ Buffen (5) attempts a free throw during their game against LSU in the quarterfinal round of the SEC Men’s Basketball Tournament at Bridgestone Arena in Nashville. Head coach Kermit Davis announce on Wednesdya that Buffen opted out of playing in the NIT and his future with the program is uncertain. (Joshua McCoy/Ole MIiss Athletics)

A depleted Ole Miss roster took a couple more hits days away from its first round game in the National Invitational Tournament.

On Wednesday, Ole Miss men’s basketball head coach Kermit Davis announced that KJ Buffen opted out of playing in the NIT and starting guard Devontae Shuler’s status for Friday’s game against Louisiana Tech was unclear a little more than 48 hours from tipoff.

Davis did not give a reason for his junior forward’s decision to not participate in the NIT with the rest of the team and was less than forthcoming when asked about Buffen’s future with the program heading into the 2021-22 season.

“KJ Buffen has opted out of the NIT and let me just say this, I’m just excited about coaching the guys that want to represent Ole Miss and look forward to playing in the postseason,” Davis said. “Those guys that we had practice (on Tuesday), they were really excited and looking forward to going. …I’m just going to leave it at wanting to coach the guys and talking about the guys who want to be in our program.”

Averaging 8.4 points and 4.5 rebounds and 22.4 minutes per game, Buffen became a spark to the Rebels offense late in the season. He joins forwards Khadim Sy and Dimencio Vaughn who left the program ahead of last week’s Southeastern Conference Tournament.

When it comes to the All-SEC guard in Shuler, his status is a little more cut and dry. Shuler did not practice with the team on Tuesday as he was with his family while his mom recovered from having surgery.

Davis is hopeful to have his leading scorer join them in Frisco, Texas on Thursday or sometime Friday in time for the 8 p.m. CT tipoff against the Bulldogs. Shuler will have to go COVID-19 protocols upon rejoining the team, which could also hinder his chances of playing in the first round.

With Shuler potentially out, Jarkel Joiner will see an even more increase of playing time and responsibility.

“Jarke will have to play a lot of point,” Davis said. “Matthew Murrell and Austin Crowley’s minutes will go up. I think Luis Rodriguez will take a big jump and Romello White will have to play like the best player in the tournament. He’s capable of that.”