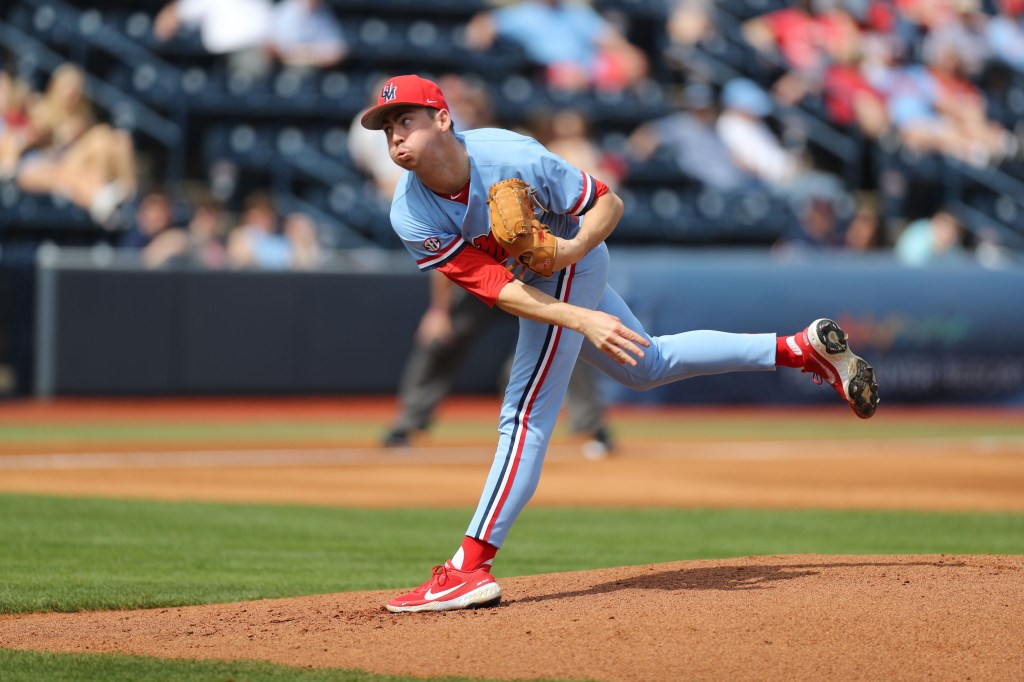 Ole Miss pitcher Derek Diamond throws a pitch during their game against UL-Monroe at Oxford-University Stadium on Sunday, March 14, 2021. The No. 4 Rebels host Auburn this weekend to open SEC play. (Ole Miss Athletics)

The first month of the baseball season is complete, and now the stretch of the season that truly matters for No. 4 Ole Miss begins this weekend.

The Rebels host Auburn for opening weekend of Southeastern Conference play. Despite having success through the bulk of their non-conference slate, there are still some questions that need to be answered, if Ole Miss is to be a contender for a trip to Omaha and a national championship.

Last weekend, Ole Miss (13-4) took two of three games from UL-Monroe before losing 8-3 in the series finale on Sunday. The loss did not hurt the Rebels too much in the rankings, mostly staying inside the top-5 in all the polls, but the inability to hit and some questionable bunt defense brought back issues that arose in their series loss to Central Florida.

Sunday starter Derek Diamond lasted less than five innings for the first time this season, working 3.1 innings and giving up five runs, three earned, off four hits. Diamond did strike out four Warhawk batters, and five-runs scored in the fourth inning were not all his fault.

Shaky bunt defense and questionable decisions by the infield led to a couple of those runs and two errors.

The back end of the weekend rotation did not have the same dominance as the front end did. Moving to Fridays and becoming the Rebels new ace, Gunnar Hoglund shined in his new role. Hoglund struck out 14 batters for a new career-high – the most by an Ole Miss pitcher in a game since Drew Pomeranz struck out 16 batters during the 2010 season.

Hoglund currently leads the nation in strikeouts with 42.

Friday and Sunday’s spots are secured for this weekend, but the biggest question is the Saturday starter. Doug Nikhazy will be the Saturday guy on the mound once he returns from a chest injury, but when that will be is currently unknown. Nikhazy missed last weekend’s series against ULM, with Drew McDaniel getting his first weekend career start.

A decision on Nikhazy’s status for this weekend will be made closer to Friday, according to Bianco.

“I don’t know that answer,” Bianco said of Nikhazy’s status on Sunday. “I wish I did. That’s part of the problem with this whole injury. But certainly, we’ll have to make a decision somewhere midweek, sometime Wednesday or Thursday.”

Ole Miss and Auburn kick off their SEC-opening series on Friday with first pitch scheduled for 6:30 p.m. CT. All three games will air on SEC Network +.