No. 4 Ole Miss holds on for series win over Auburn 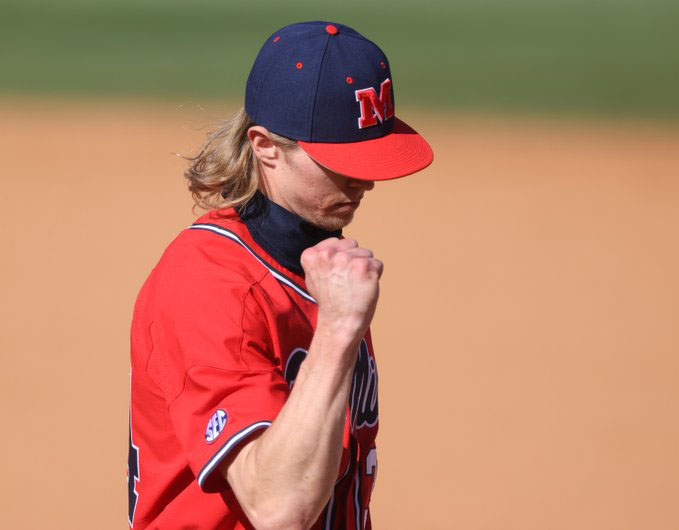 Tyler Myers is shifting from a comeback story to one of Mike Bianco’s top relievers with every appearance.

The senior right-hander, who is a year removed from Tommy John surgery, came in the top of the seventh inning after Auburn cut the Ole Miss lead to one run and got the crucial out to maintain the lead.

Myers returned in the eighth inning and kept the Tigers off the board, helping the No. 4 Rebels pick up the 6-5 win and securing their first Southeastern Conference sweep of the season on Saturday at Oxford-University Stadium.

In five appearances this season, Myers has an earned run average under 2.00 in 8.1 innings pitched and struck out nine batters and walking only one.

“You live for those situations, especially in the SEC,” Myers said. “It was awesome. Just got to stay in the moment and embrace the opportunity that I got. …I love those situations. It’s got a little adrenaline feel. Today was a little bit different. A little more calmer than usual, but it’s baseball and I loved it.”

Jackson Kimbrell, Austin Miller and Taylor Broadway also worked in relief with Broadway picking up his third save and second-straight save in as many days.

At the plate, Ole Miss (15-4, 2-0 SEC) had better success against Tiger starter Mason Barrett on Satuday than they did against Cody Greenhill on Friday. The Rebels scored six runs in the first three innings, which ended up being enough to keep Auburn (11-7, 0-2) at bay.

Once the Rebels knocked Barnett out of the game in the third inning, the Auburn bullpen piled up five scoreless innings. One area Ole Miss struggled with on Saturday was taking advantage of runners in scoring position, going 3-for-19 at the plate.

The Rebels stranded 13 runners on base.

“I thought today our approach was much better. I thought our at-bats were much better,” said Ole Miss head coach Mike Bianco. I thought we did really well except for the category that sometimes is the most important, the timely hit. If we could have just gotten two more hits I think the game is totally different. I think we get double-digit runs.”

Calvin Harris recorded three runs batted in and went 1-for-3 at the plate after hitting the game-winning home run on Friday. Hayden Leatherwood and Justin Bench each had an RBI.

Ole Miss will look for the series sweep on Sunday. First pitch is scheduled for 1:30 p.m.