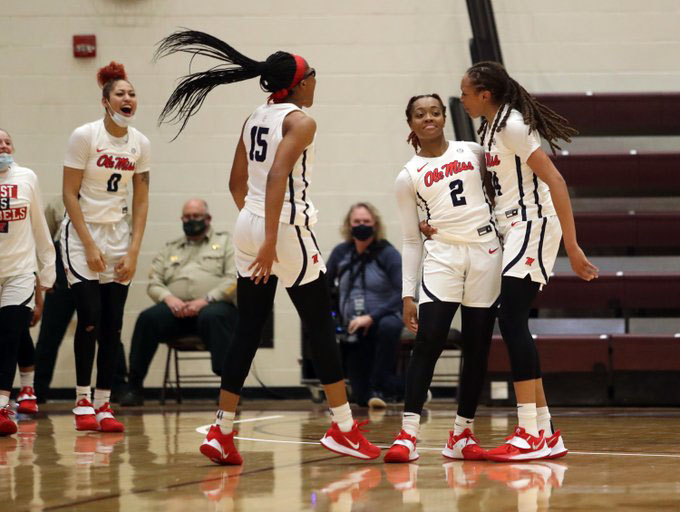 Members of the Ole Miss women’s basketball team celebrate during their game against Colorado in the quarterfinal round of the Women’s NIT at Collierville High School in Collierville, Tenn. on Monday, March 22, 2021. The Rebels won 65-56 to advance to the WNIT Final Four. (Ole Miss Athletics)

The Ole Miss women will not allow their season to end and are making history in the process.

Withstanding a second-half rally by Colorado, the Rebels held on to defeat the Buffaloes 65-56 in the Regional Final of the Memphis bracket in the WNIT at Collierville High School on Monday. The win gives Ole Miss (14-11) the program’s first berth to a Final Four in either the NCAA Women’s Basketball Tournament or the WNIT.

Falling back on previous experience in games where they fell just short or gave up a late lead, the Rebels were able to come up with key defensive stops against Colorado and proved they could win in big moments.

“Pain is success,” said Ole Miss acting head coach Shay Robinson. “Early in the year, those loses (against) LSU that were close. The Tennessee loss that was close. We were learning. We were growing and grinding through that to understand and learn how to pull these moments out. Definitely proud of the team and we still got work to do.”

Robinson filled in as head coach for a second-straight game in Yolett McPhee-McCuin’s absence. McCuin missed the Rebels first three WNIT games due to testing positive for COVID-19 over a week ago. McCuin is expected to be out of quarantine on Tuesday and will join the team for Friday’s semifinal game.

At halftime it did not appear Ole Miss was going to be in a nail-biting finish in the final moments of the game. Using a second quarter where they shot over 73 percent from the floor and outscoring Colorado 28-10, the Rebels took a 16-point lead at the break.

In the second half, the hot offense stayed in the locker room as the Rebels shot 23 percent (6-of-26) and were unable to duplicate their offensive success from the second quarter. Colorado found a rhythm the final two periods, outscoring the Rebels 33-26 and cut a 15-point deficit down to three late in the fourth quarter.

Ole Miss found their suffocating defense in the final two minutes and held the Buffaloes in check, including two key blocks from Madison Scott and Donnetta Johnson.

“I think it was just getting back to defense,” Robinson said. “We were not up passing lanes. We were not dictating and disrupting on the defensive end. We weren’t winning loose balls, which we call, ‘our balls,’ and we wasn’t really on the glass. So we just had to get back to our defense and we were being a little slack in that and letting (Colorado) get too comfortable.”

Johnson finished with a team-high 15 points to go with five rebounds while Scott recorded a double-double, finishing with a game-high 12 rebounds along with her 11 points. Shakira Austin also had a double-double with 12 points and 10 rebounds. Snudda Collins was the other Rebel to finish in double-digits with 11 points.

For the first time in three-year stint with Ole Miss, McCuin was not on the sideline. She spent the first three rounds watching her team and cheering from home. Despite McCuin not being there in person — she Zoomed into the postgame press conferences the last two games — the team found another reason to keep their season alive.

“It’s not really without Coach Yo,” said Robinson. “Coach Yo is poured into this program and every individual in here and we follow her leadership and her guide. She sets the standard and we uphold the standard. So she’s here with us. She still the leader. The general just wasn’t in the field with us, but the general still sets the tone and the standard.”

Ole Miss will play Northern Iowa in the WNIT Final Four on Friday at 7 p.m. CT back at Collierville High School. The game will air on FloHoops.