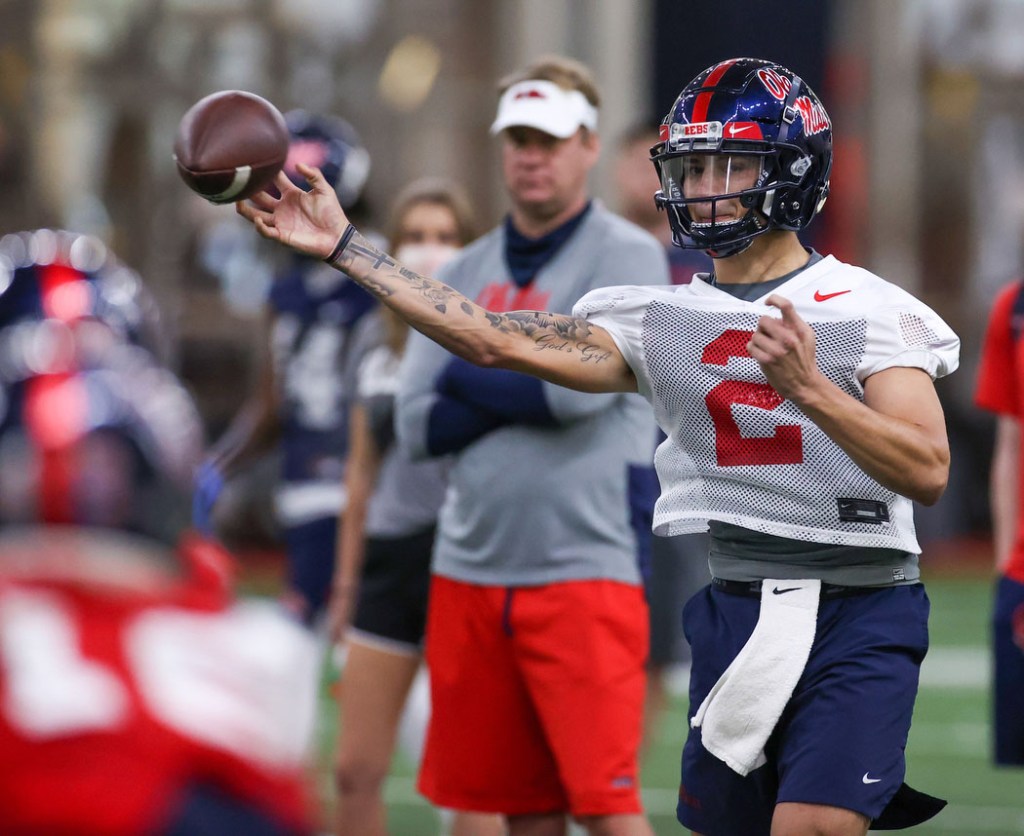 Ole Miss football started its spring practices on Tuesday, marking the first time Lane Kiffin has been able to see his players on the field during the offseason.

Kiffin was hired in December of 2019 but did not get to have a spring with his players in 2020 due to the COVID-19 pandemic. The first time he saw his roster in a practice capacity was in August, as preseason camp began.

Not only is Kiffin getting to experience a full offseason schedule; he and his staff are able to have some continuity with their system and fine tune some areas that struggled in last season.

With an extra year due to the eligibility waiver granted by the NCAA created by the pandemic, there are more returning players on the roster than a normal spring. Getting the chance to continue working with a bulk of the players who are already familiar with Kiffin’s system keeps them on schedule entering the fall.

“We never had a spring before, so it’s a really good opportunity for these guys. For all the returners,” Kiffin said. “It’s an unusual year with that as very few players are not here from last year’s roster. Unlike normal with seniors and attrition from transfers.”

Coming off a 2020 season that featured a Southeastern Conference-0nly schedule, the Rebels are riding some momentum following their win over No. 7 Indiana in January’s Outback Bowl.

One specific spot with a high amount of expectations is at quarterback with returning Matt Corral. The junior is anticipated to retain his starting spot, which he won out over John Rhys Plumlee as 2020 progressed. With spring drills beginning there is a lot of conversation surrounding Corral and his chances of being a Heisman Trophy candidate for 2021.

The California native, who finished in the top three of SEC quarterbacks behind Mac Jones and Kyle Trask last season, is not paying attention to any of that. Corral is focused firmly on 2021 and having continuity in an offensive system for the first time in his Rebel career and cleaning up his SEC-high 14 interceptions from a season ago.

“Just building on what we did last year, really,” Corral said. “We know what we have on the offensive side of the ball and just growing on that. We know my mistakes (from last season) and we know what to work on. They’re harping on me everyday on what to get better at. It’s nothing that I don’t know. We all know that I need to work on it. Just taking the leap that I made last year to this year.”

Not in the quarterback room this spring will be Plumlee, who is heavily entrenched in the Ole Miss baseball season. Kiffin and Ole Miss baseball head coach Mike Bianco spoke a couple weeks back about the plan for Plumlee once spring practices began. They agreed it would be baseball first and football when he had the time, similar to how they handled baseball in the fall during football practices.

Kiffin said on Tuesday that Plumlee was in the quarterbacks room that morning ahead of the team’s first practice.

Ealy, who is out for the season due to a shoulder surgery he received in the winter, would have been in the same position as Plumlee but the injury took the running back out for both this spring.

“We let the guys, when they play two sports, we let the guys fully commit to the other sport,” Kiffin said. “It’s just not fair otherwise to the player, I think. I was able to go out to the (Auburn series) and see him this weekend. It’s pretty neat for him to be that competitive and able to make the team, let alone be on the field, in conference games speaks to the athlete he is.”

Kiffin, who is usually very close to the vest when it comes to discussing injuries on his team, provided a list of players who will be out all spring.

Each Saturday during spring drills, the Rebels practice inside Vaught-Hemingway Stadium will be open to the public and start at approximately 9:30 a.m.