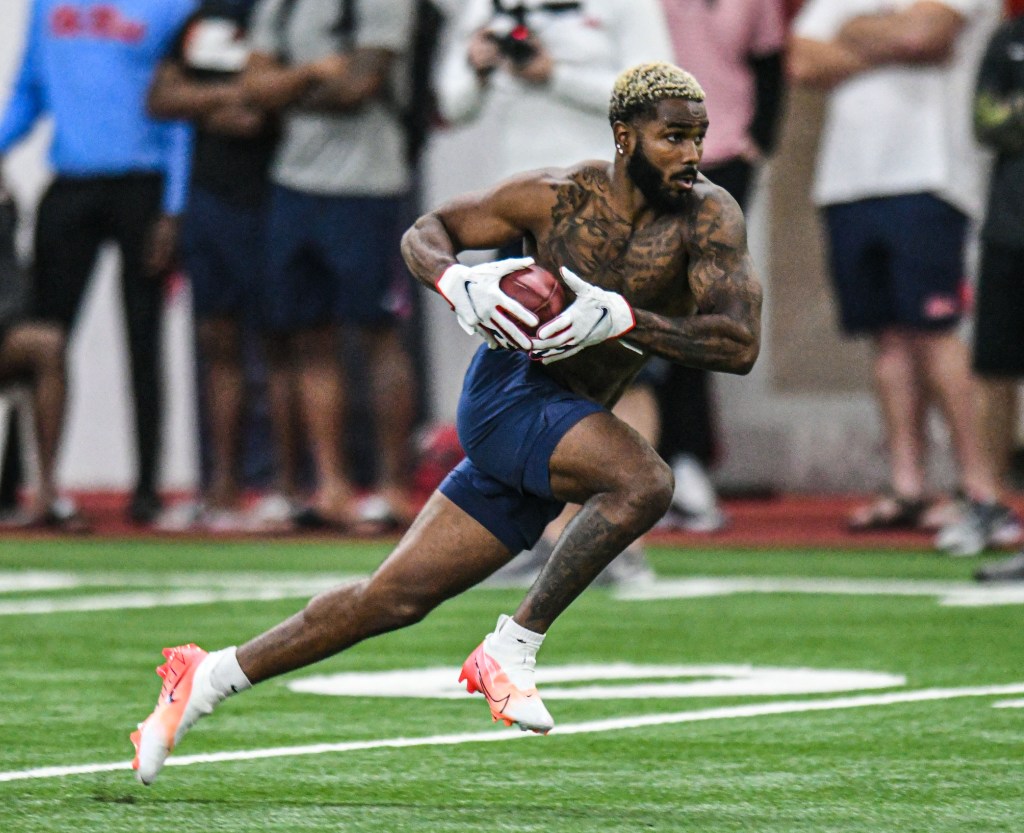 With the NFL Combine not taking place in its traditional format for a second straight year, Elijah Moore had one chance to make as good of an impression as possible with NFL scouts on Thursday.

Moore accomplished that goal during Ole Miss Pro Day inside the Indoor Practice Facility, putting up fast times in the 40-yard dash and three-cone drills and showing off his athleticism in passing drills.

In the 40-yard dash, Moore posted a time of 4.32 seconds. In the weight room, he completed 17 reps at the bench press, but said he was aiming for 20. He also completed the three-cone drill in 6.65 seconds.

The former Ole Miss receiver said he felt he did all he could, and needed to do, to hear his name called on the first day of next month’s NFL Draft. Moore said he personally feels he should be the first name NFL Commissioner Roger Goodell should call off the board as heading to the Jacksonville Jaguars.

While having strong feelings of why he should be the number one overall pick, Moore also acknowledged that part of the process is also finding the right team and the right fit. If that does not come in the first pick or the second pick or even the first round, Moore said he will be happy where he lands.

“I don’t know why I don’t get picked first overall,” Moore said following Thursday’s Pro Day event. “You can’t tell me there are many people better than me. I feel like I’m the best offensive player in the whole draft. … Of course I have dreams and aspirations to go in the first round, but of course I want to go to the right position.”

A strong statement from one of the nation’s top offensive players last season, finishing first in the NCAA with 149.1 receiving yards per game. Moore also finished ahead of Heisman Trophy winner, and former Alabama receiver, DeVonta Smith, in catches per game with 10.8.

On Thursday, Moore was on the receiving end of passes thrown by former Ole Miss and NFL quarterback Chad Kelly. Kelly, who was pick No. 253 in the 2017 NFL Draft, played the role of quarterback during the passing drills. Former Ole Miss wide outs Damore’ea Stringfellow and Demarkus Lodge participated along with Moore.

Afterwards, Moore made the case for why Kelly should be on an NFL roster and not throwing passes during a Pro Day event.

“I don’t know how he’s not out there killing, ripping the league, man,” Moore said of Kelly. “The first workout I came out here, he made a bad throw and did like 40 push ups. I’ve never seen a quarterback do that. Just his mentality and how he runs the film room. Every day we’re watching film like we’re at practice. He’s even going up there and showing me how to run my own routes. …I’m grateful that he was throwing to me.”

The measurables for Moore are what some draft pundits have as potential hold backs when it comes to a high draft selection. With a 5-foot-9 frame, Moore is not the tallest receiver prospect in the draft.

Ole Miss head coach Lane Kiffin, who did not watch much of the event due to the team holding their second spring practice earlier on Thursday, did offer support for his former receiver and waived off the notion that size still matters at that position.

“It’s not like he’s a midget,” Kiffin said of Moore’s stature. “With him, it’s important to understand his play count and work load in a game that are much different than a lot of these other receivers that you compare him to in the draft. When you watch him sometimes maybe he doesn’t look quite as fast, but you’ve got to understand he’s playing a lot of plays, there are like five to 10 seconds between snaps.”

Behind Moore, Yeboah was the second-most productive receiver last year for the Rebels. The scouts who were on hand for the Pro Day event did not get to see much of the tight end after he injured his hamstring during his 40-yard dash attempt and did not continue.