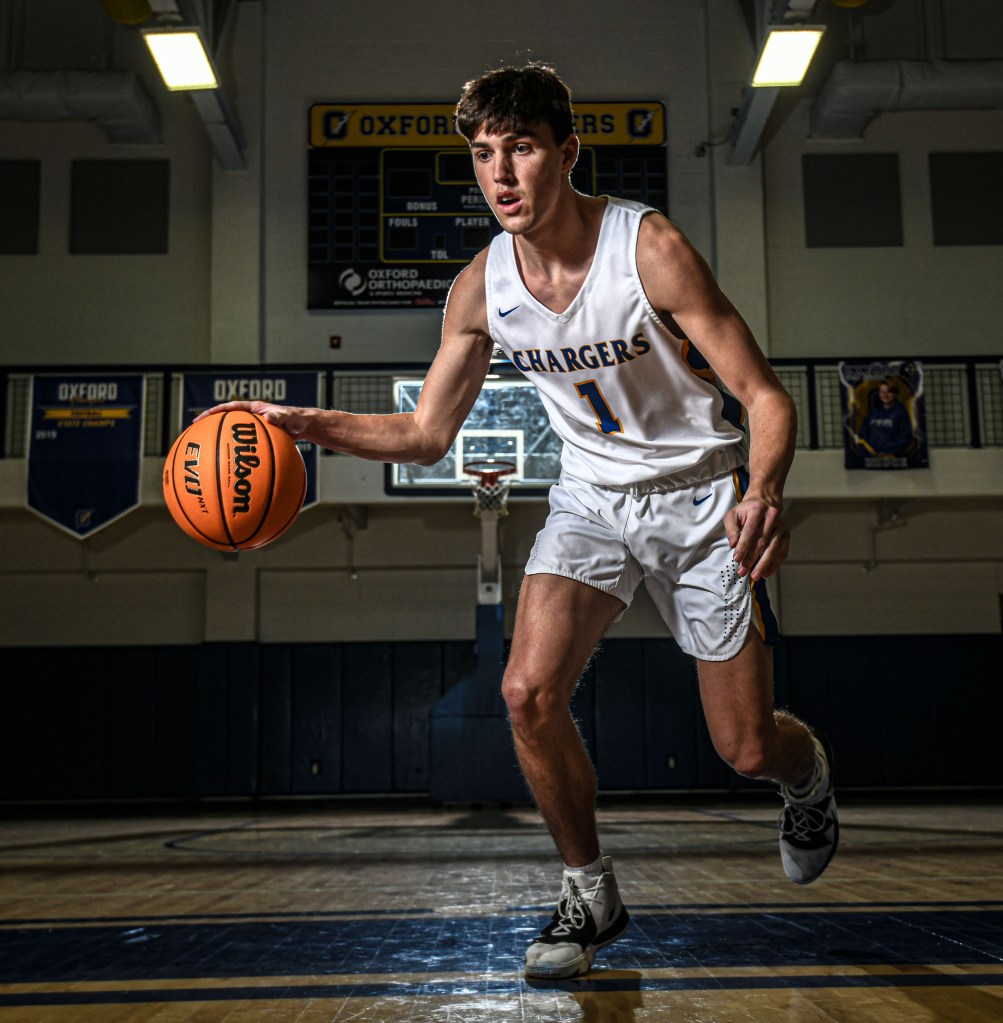 Oxford High’s Chase Rose is the Oxford Eagle’s Player of the Year, in Oxford, Miss. on Wednesday, March 24, 2021. (©Bruce Newman)

Chase Rose knew there would be differences in competition when he transferred from Kirk Academy to Oxford High School, and that they would be stark.

The senior managed to navigate his new environment, adapting to life in Mississippi High School Activities’ Class 6A, the top of the public-school food chain. Rose found success, averaging a team-high 19.7 points and 5.7 rebounds per game to earn him this year’s EAGLE Player of the Year.

“Definitely way better competition,” Rose said. “Especially when I was playing at (Midsouth Association of Independent Schools), and here I am playing 6A public school. Definitely, it was different. It helped me get a lot better, too.”

When the COVID-19 pandemic hit Mississippi last March and schools were closed and the remainder of MHSAA’s athletic calendar canceled, Rose started working on his game. But the ability to start gelling with his new teammates didn’t come until later.

The full process of Rose adapting to the level of his competition didn’t fully begin until November, once basketball season began and teams were able to compete against one another. Losing the ability to play in summer games due to the pandemic, as most teams do during June, hurt the process.

“I thought (Rose) embraced it,” said Oxford head coach Drew Tyler. “There was a whole new animal in the equation in dealing with the pandemic because we couldn’t have summer basketball and as far as him getting here with his teammates and starting to find their identity and get some games under their belt and start gelling.”

Once the season began and Rose was having a trial by fire, there were parts of his game that Tyler said he realized needed some work, specifically on the defensive end. As the games rolled off the calendar and the schedule turned to region play, Rose started to show he was beginning to grasp life in 6A basketball.

Prior to the season starting, Tyler and assistant head coach Tyler Reed realized if the Chargers were going to have any success  the offense was going to have to go through Rose.

“We knew that before the season started that he would have to get so many touches and so many shots,” Tyler said. “He’s one of the best shooters we’ve had in our program, there’s no doubt about it, and his range is unlimited. We wanted to get him to the free-throw line more to where he was playing physical, to draw fouls to get to the free throw line. … At the same time you got a shooter like Chase Rose to make his teammates better.”

Despite having only one season with Oxford and at the 6A level, Rose said he felt like he achieved personal goals he set for himself even though the overall goal of raising up a state championship was not accomplished.

Rose also credited Tyler for evolving and rounding out his complete skill set.

Joining Rose on this year’s All-Area team and representing Oxford are Derrious Southern and Omari Frierson.

With Rose, Southern was the other senior leader on the court who continued to improve his game in his final season as a Charger. Southern averaged 15.6 points and 3.9 rebounds and 2.2 assists per game.

At the midway point of the season, around the Christmas break, Tyler said he noticed a switch flipped in Southern’s game and the senior embraced his role as part of a one-two punch with Rose on the offensive end.

“After Christmas (Southern) put it in a different gear,” Tyler said. “He was more business-like on the court and really showed he could start playing off the dribble. He wasn’t one-sided. He started to really go towards his weak hand, and it made it really tough on the opposing defense. There were numerous games where Derrious was our high-scorer.”

With Rose and Southern serving as the top threats for opposing defense to scout and account for, Frierson was one of several teammates who benefited and provided offense when called upon.

“(Frierson) was high and low with his confidence,” Tyler said. “We found that the more he would give us on the defensive end, we kind of loosened up on and gave him more on the offensive end as far as perimeter play. Trying to use his strong body in the paint. I think he had a great season to catapult him for his senior year.”

Coming off Brad Gray’s third season as head coach of the Lafayette boys basketball team, the program is starting to resemble the culture Gray said he envisioned when he came from Senatobia in 2018.

The results were still not where the Commodores expected them to be, but there is a change in attitude. Helping to lead the culture shift this season were JC Dennis, DJ Davis and Mario Wilbourn, who represent Lafayette in this year’s All-Area Team.

Dennis led the Commodores in scoring, averaging 10.2 points per game along with 2.9 rebounds a game. The senior became a spark for Lafayette down the stretch of the season, including hitting the three-pointer that sent their game against Oxford into overtime, which the Commodores won.

“JC was consistent all year long as far as pretty much whenever we needed that bucket, we looked at JC to get that bucket,” Gray said. “We’re definitely going to miss him. …I think it gave him a lot of confidence. To hit (the shot against Oxford) in that moment, considering a couple games earlier against Saltillo he kind of had the same look in the similar situation.”

Davis was right behind Dennis, averaging right at 10 points a game and pulled down nearly four rebounds a game. As an eighth-grader during the 2019-20 season, Gray started him early in the year. That decision to do so may have been a little earlier in Davis’ development, but paid off for the freshman this season.

“I may have thrown him in the fire a little too early,” Gray said. “He might not have been physically or mentally ready as an eighth grader, but this year as a freshman I thought he really stepped up and matured a lot. Played more like an upperclassman than a freshman, because he didn’t look like a freshman on the court.”

Serving as the power in the post and a scoring optiong down low, Wilbourn used his size and strength dictate the pace for Lafayette most nights.

Wilbourn pulled down the second-most rebound on the team, averaging 4.1 a game to go with 6.9 points a night.

“The thing with Mario is he’s such a dynamic athlete,” Gray said. “He’s the anchor on our defense on the football team and the thing with Mario and a lot of our football guys is once they leave football they’ve got to step in immediately. They don’t have much of an acclimation period to get adjusted to basketball and the flow of the game. … For him to be able to transition from football to basketball and step in and contribute that says a lot about him.”