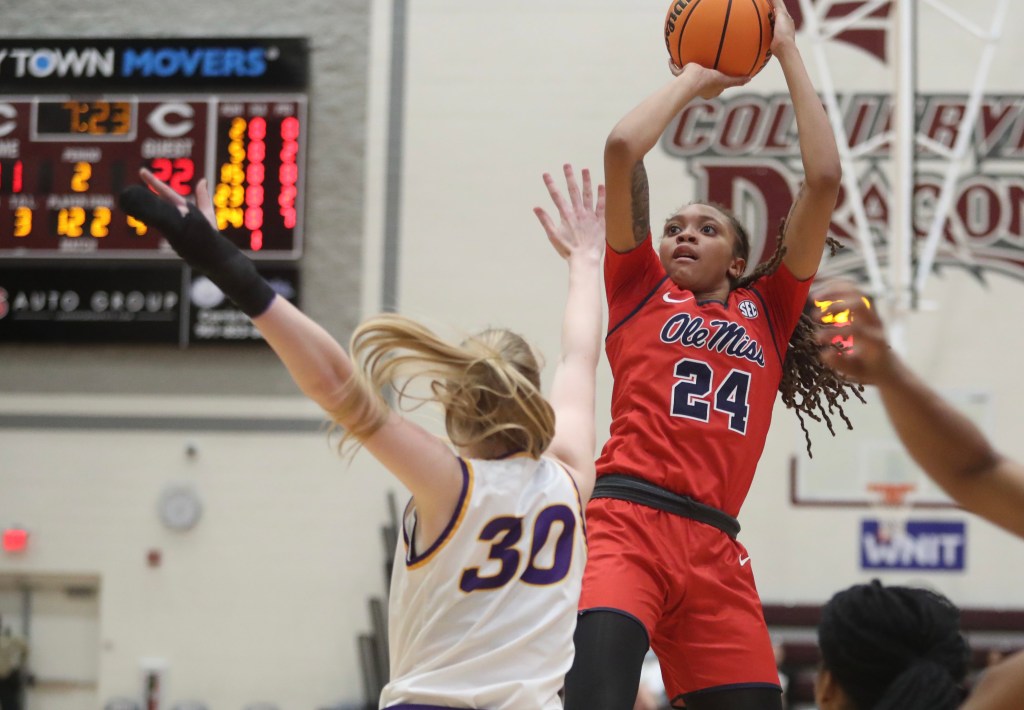 Ole Miss forward Madison Scott attempts a shot against Northern Iowa during the seminfal round game of the WNIT at Collierville High School in Collierville, Tenn. on Friday, March 26, 2021. The Rebels won 60-50 to advance to Sunday’s WNIT Championship for the first time in program history. (Petre Thomas/Ole Miss athletics)

COLLIERVILLE, Tenn. — The Ole Miss women’s basketball team will end their season playing for a championship.

The Rebels defeated Northern Iowa 60-50 in the semifinal round of the WNIT at Collierville High School on Friday, sending them to Sunday’s WNIT Championship game against Rice at 1 p.m.

When Madison Scott signed with Ole Miss and spoke with head coach Yolett McPhee-McCuin, playing for a championship, let a let alone winning one, was goal for down the road. Sunday’s opportunity was expected to be in the cards in 2021.

Scott, who has won a state championship at the high school level and with her AAU team, is looking to win her first collegiate postseason championship on her first try with the Rebels.

“I’m excited. It feels good to be in the big dance,” Scott said. “This year we didn’t even think postseason. This is still part of the rebuilding year. I’m so happy. Our whole program is grateful and hard work is truly paying off.”

As for the game itself, Ole Miss (15-11) continued its run of dominating and dictating defense through the tournament with 12 blocks and seven steals. Northern Iowa, who shot 31.6 percent from the floor, struggled all night to get any closer than five points.

Shakira Austin once again was too much for an opposing to slow down, scoring a game-high 18 points along with eight rebounds and two assists. Madison Scott finished with 14 points and a game-high 11 rebounds.

McCuin made her return to the sideline after sitting out the first three games of the tournament last weekend after testing positive for COVID-19 earlier this month.

“(It felt) amazing. I’m exhausted,” McCuin said. “Before the game I said I’m not going to shout one bit and before the (first) media (timeout) I was shouting at somebody. It felt real good to be back.”

Ole Miss and Rice will meet at Collierville High School to decide the 2021 WNIT Champion. The Owls advanced to Sunday’s game by defeating Delaware 85-75 in the first semifinal game of the day on Friday.