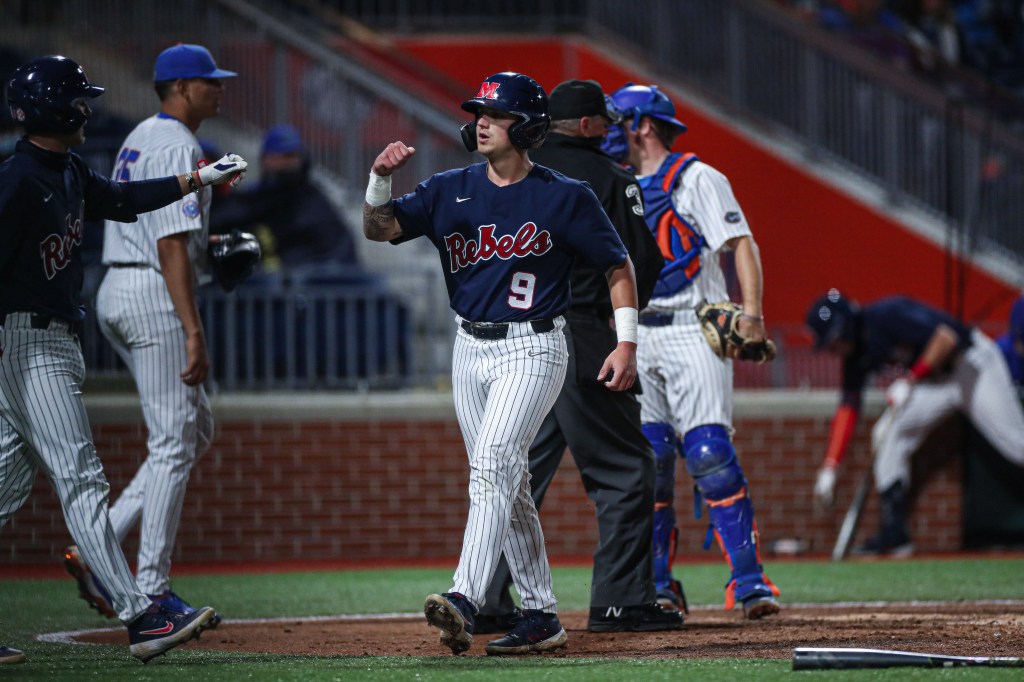 Ole Miss outfielder Hayden Leatherwood (9) is congratulated after scoring a run in the third inning during their game against Florida at the Florida Ballpark in Gainesville, Fla. on Thursday, April 1, 2021. The Rebels lost 4-1. (Ole Miss Athletics)

The No. 3 Rebels lost to No. 15 Florida, 4-1, at Florida Ballpark in Gainesville, Fla. for their first Southeastern Conference loss on the season.

Errors and struggles at the plate doomed the Rebels (20-5, 6-1 SEC) who were unable to solve the pitching puzzle that was presented to them by Florida head coach Kevin O’Sullivan, who made changes to his rotation on Wednesday.

Tommy Mace, the usual Friday starter and ace for the Gators (17-8, 4-3), did not get the start on Thursday as reliever Franco Aleman took the mound in Mace’s stead. Aleman went four innings, giving up one run off three hits and struck out three Rebel batters. Mace entered the game in the fifth inning and pitched five scoreless innings to earn the win and move to 5-0.

The Rebels had one of their worst performances at the plate on Thursday. The leadoff batter got on base in five innings but scored in only one inning when Leatherwood scored a run after a leadoff single in the third inning to tie the game at 1-all at the time.

With runners on base, the Rebels went 0-for-14 and went 0-for-6 with runners in scoring position. Ole Miss batters struck out 10 times and only took a free pass twice.

“We just could the at-bats together and just couldn’t get the timely hit today,” said Ole Miss head coach Mike Bianco. “Just didn’t play well. Disappointed in our performance. Kicked the ball around. …Just not a good day for us.”

Hoglund, the Rebel ace, took his usual place on the mound on Thursday, working six innings and giving up two runs off three hits while striking out five Gator batters and walking three. The junior struggled with his pitches tonight but managed to limit the damage despite the Ole Miss defense committing three errors in the game.

Hoglund picked up his first loss of the season, falling to 3-1 on the year. It was the first loss for him since the 2019 Regional in Oxford.

“I felt alright out there. Command wasn’t great and (my) stuff wasn’t what it usually is tonight,” Hoglund said. “I just went out there and tried to battle and give my team a chance to win.”

The Gators scored a run in the first inning, fourth inning and two in the eighth inning.

Ole Miss will look to even the series on Saturday with first pitch scheduled for 5:30 p.m. CT. The game will air on SECN+