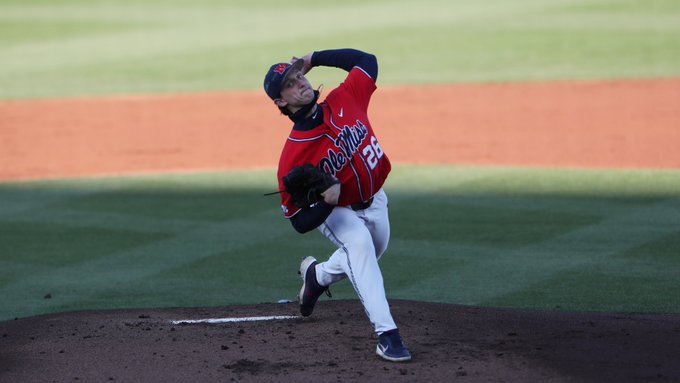 After losing 4-1 to No. 15 Florida in Thursday’s series opener, the No. 3 Rebels bounced back 24 hours later with a 8-2 win to tie the series up at Florida Ballpark in Gainesville, Fla.

A two-run home run by Jacob Gonzalez and a four-run ninth inning propelled the Rebels (21-5, 7-1 Southeastern Conference) to victory after the bats fell silent in the middle innings.

The Gators ( 17-9, 4-4) tied the game in the seventh inning with a solo home run from center fielder Jud Fabian. It was the first run scored by Florida after scoring a run in the home half of the second inning.

Gonzalez was 3-for-5 from the plate with 4 RBI and no hit was bigger than his fourth home run of the season in the top of the eighth inning to give the Rebels a two-run lead once again.

All but two Rebel starters recorded at least one hit. Kevin Graham went 2-for-4 with a double.

“The offense just caught fire and of course Jacob was terrific,” said Ole Miss head coach Mike Bianco. “We can do that. We can put some runs on in a hurry.”

Doug Nikhazy made his second start since returning from a chest injury and had another quality outing. Nikhazy worked six innings, giving up one run, unearned, on two hits and walked three but recorded 11 strikeouts for a new career-best in an SEC game.

Reliever Drew McDaniel picked up the win, improving to 4-0. McDaniel entered in the seventh inning, giving up the leadoff home run to Fabian but responded by retiring the next three batters, including two strikeouts. Taylor Broadway worked the eighth and ninth innings for his seventh save of the season.

Ole Miss will go for their third consecutive SEC-series win in Saturday’s rubber match. First pitch is scheduled for noon CT and the game will air on SECN+