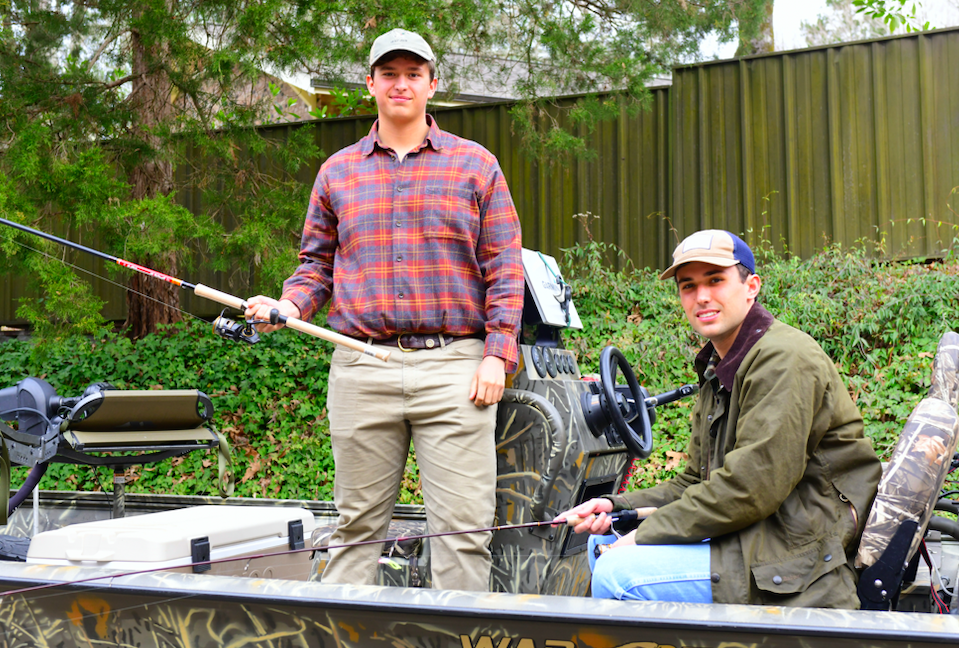 William Shell, left, and his brother Dan Shell IV, right, spent most of 2020 fishing at lakes around Lafayette County. When they realized they had too caught too many for them to use, they began helping others in need. (Joey Brent)

When Dan Shell IV and his brother William went into isolation and quarantine at their home in Oxford, they needed an outlet and that outlet became them sitting on a lake and fishing.

The activity was not only practicing social distancing, but it turned into a hobby that benefited others as the COVID-19 pandemic raged on during 2020.

The brothers Shell attend school in Memphis, but once the pandemic forced campuses to close to in-person instruction, they retreated back to Oxford, where fishing was their only escape from the confines of sitting in their house 24 hours a day, seven days a week.

“We were stuck here so we were like, ‘Well, nothing else to do so we better find something,’” said Dan. “We like to fish and we just started. Every other day in the summer.”

They hit up all the lakes around Oxford and Lafayette County, including Sardis, Enid and Grenada Lakes.

Soon, the brothers realized they were becoming very successful at their hobby-turned-quarantine escape. The boat began filling with fish, more than they anticipated or had room for over those first couple weeks.

The plentiful bounty of fish soon became an issue back at home, as lack of storage soon became noticeable.

“We had no more room in our freezer,” Dan said.

A solution quickly presented itself when they would arrive back at the boat ramp from their time on the lake.

Other would-be fishermen would be striking out and not having any luck, while the Shell brothers would float back up to the boat ramp with a boat full of fish. So, they soon realized with no more room at home, they should share with those who may not be having as much success.

With the pandemic causing some families to struggle to make enough money to buy food and with grocery stores having trouble to keep food on shelves, finding other sources of food such as fishing became a necessity.

Knowing the other people at the boat ramps were either returning with nothing to show for their efforts or about to venture out onto the lake to try their hand, the Shells offered up their overstocked boat full of fish.

“It kind of started out just finding guys at the boat ramp and just asking, ‘Hey, do you want some fish?’” Dan said. “We kind of realized these guys really need fish, and they’re really appreciative of it. It just turned out of us starting a hobby, just catching some fish for the freezer to helping out other people, and it kind of evolved.”

The evolution occurred when their father, Dr. Dan Shell, a plastic surgeon in Oxford, began asking his patients if they would be interested in some of the extra fish.

Then, the paying-it-forward act grew even more when they would start meeting people at the Sky Mart located on College Hill Road.

“We just did that all summer, pretty much. Just giving fish away,” Dan said. “It was rewarding to us. We got to do something we love to do and help out other people in the process.”

A secret to the brothers’ success comes from years of paying attention in math class and using some basic trigonometry to find that “sweet spot” of the lake.

In a portion of the lake called a thermocline, which is also known as a thermal layer, there is a thin but distinct layer in a large body of fluid.

With the knowledge of where the thermocline is, once the brothers would discover it, they then would turn to some algebra and trigonometry to try and locate where the biggest population of fish would be.

“It really wasn’t hard. Just an angle measurement and a few calculations, and it was pretty easy,” Dan said. “It didn’t really take long. The first week we kind of struggled to get all the fish and I was like, ‘Hold on. There’s got to be a way to get it right where we want it.’”

Once the sweet spot was found, it was academic from there. During the summer months, the fish would stay in a consistent level in each of the lakes, making the mathematic approach easy to solve.

They never really expected a pandemic to cause them to rely on teachings from Algebra 1 class that would in turn allow them to help members of their community who were struggling to find food during a global health crisis.

Once the pandemic subsides, or ends, the brothers anticipate getting back to some semblance of their normal lives and routines. Trips to the lake may not be as frequent as they have been the past year, but they are already being asked when that next fishing trip will occur that could help provide food on someone’s table.

“There’s always a demand for food,” Dan said. “The reality is people are struggling with it in the more rural areas. People ask us all the time when we’re going back out to get more fish.”