Rebels’ Elko suffers ACL injury but season may not be over 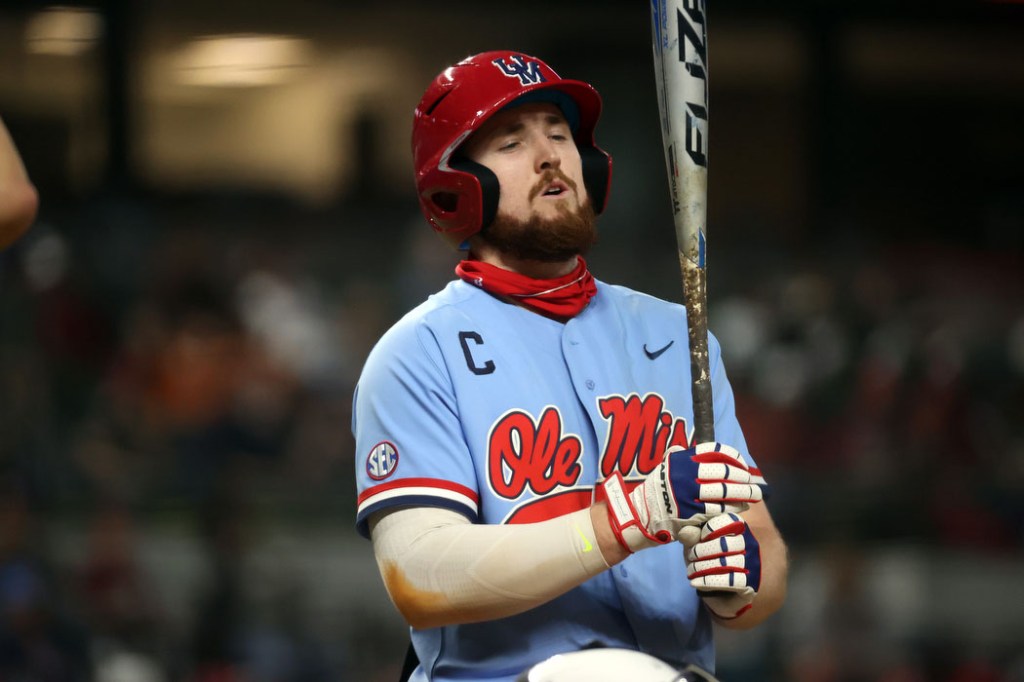 Ole MIss third baseman Tim Elko suffered a knee injury during the Rebels game against North Alabama on Monday, April 5, 2021. A diagnosis of Elko’s injury was not yet known as of Tuesday morning. (Joshua McCoy/Ole Miss Athletics)

The No. 3 Ole Miss baseball team received an update on the status of Tim Elko’s injury on Tuesday, but it may not be a season-ending prognosis.

Elko suffered a knee injury during the fourth inning of the Rebels 20-6 win over North Alabama on Monday on what started out as a routine groundout but became potentially catastrophic for the Ole Miss captain.

While dodging out of the way of  North Alabama first baseman who was diving after an errant throw, Elko seemed to tweak his right knee as it buckled. Elko crumpled to the ground behind the first base bag immediately.

Ole Miss head coach Mike Bianco provided an update on his senior’s injury following their 8-1 win over Alcorn State on Tuesday. During his pregame radio interview with David Kellum, Bianco revealed Elko tore his ACL but there is potential for him to still return to the lineup this season.

An ACL injury is usually one that ends a season, leading to surgery and rehab for up to a year. Elko is going to skip surgery for now and try rehab over the next few weeks and then see where things stand.

“One thing we learned from the doctor is how different this injury is for a lot of people,” Bianco said. “The first thing is to get (Elko) to be pain free. To walk around and go from there. Then, it’s just going to be a thing to where is he able to do it? The doctor said today that some people can and some people can’t”

Bianco did not put an exact timeline on how long Elko will try the medication and rehab process before deciding if surgery is still needed, but noted at least two to four weeks. This leaves Ole Miss (23-6, 7-2 Southeastern Conference) without one of its best hitters entering this weekend’s SEC series against No. 2 Arkansas (23-4, 7-2) and next week’s series at No. 5 Mississippi State (21-7, 5-4).

Elko went o-for-3 in the game on Monday and was coming off a career-month in March where he had a .424 batting average with 33 runs batted in off eight home runs and seven doubles. Prior to March, Elko was hitting sub .100 during the Central Florida series at the end of April.

On the season, the senior was hitting .342 at the plate with 56 RBIs. On Tuesday, the National College Baseball Writers Association named Elko the Hitter of the Month for March.

“The message today (to the team) was it’s disappointing,” Bianco said. “We’re all disappointed for Tim. A guy who deserves this time to be a star in our program and for it to stop right now on kind of a weird play. It’s a weird injury for a baseball player.”

Ole Miss and No. 2 Arkansas will start their series on Friday with a first pitch scheduled for 6 p.m. CT. The game will air on SEC Network.