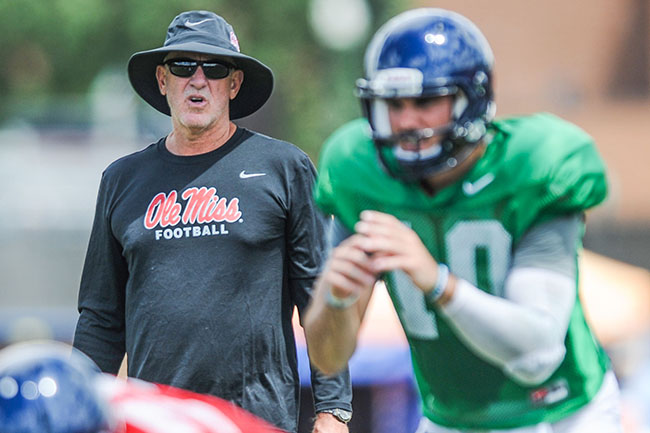 Dan Werner will be back on a football field in Oxford this fall – this time at the high school level.

With more than 36 years of coaching experience at the collegiate level, Werner will bring his knowledge to the Commodores’ quarterback room. Werner had been the quarterbacks coach at South Carolina for two seasons before being let go in December 2019.

Werner has been living in Oxford since, and Lafayette head coach Michael Fair said the idea of having a coach like Werner on his staff is something he’s wanted for quite some time.

“We’ve had a relationship for several years now, probably 10 years, when he was at Ole Miss the first time, and just always kept in touch,” Fair said. “I said for years, ‘When you retire, or at least get through coaching college, will you come help?’ It worked out this year and they’ve loved living in Oxford and didn’t want to leave. He wanted to do something with his time.”

Prior to being hired onto then-head coach Will Muschamp’s staff at South Carolina, Werner spent five seasons as the Rebels co-offensive coordinator and quarterbacks coach. During a second tenure at Ole Miss — Werner was hired by then-Rebel head coach Ed Orgeron in 2006 and was on staff for two seasons —  he oversaw both Bo Wallace and Chad Kelly.

The move by Lafayette to hire Werner is similar to when Oak Grove hired former Southern Mississippi and NFL quarterback Brett Favre. Knowledge from the next level down is what Fair said he is looking forward to Werner providing to his team, especially in the quarterback room.

Tyrus Williams will be entering his second season as the anticipated starter for the Commodores. Entering his senior season, Williams will learn under the tutelage of Werner, who is replacing Fair as the quarterbacks coach this season.

“I don’t know if our kids realize yet what they’re being exposed to and the opportunity that they’re having,” Fair said. “Because this is a guy who, just a couple short years ago, was game planning against Clemson. …Quarterback situation, you see on Friday nights during those plays, but what you don’t see on the sidelines are those guys looking at the screen and that guy that’s in his ear saying, ‘Hey, what were you thinking here or what were you thinking about this?’ It’s a constant line of communication, if you’re doing it the right way, and that’s what Coach Werner brings to the table.”

Werner will be an assistant coach and is full-go with the Commodores. He will begin with the team starting with next month’s spring drills and will be with them on Friday nights this fall.

As for replacing former offensive coordinator Jason Russell, who was hired by Olive Branch to become their head coach in February, Fair said Lafayette is working through that process still and interviewing candidates.