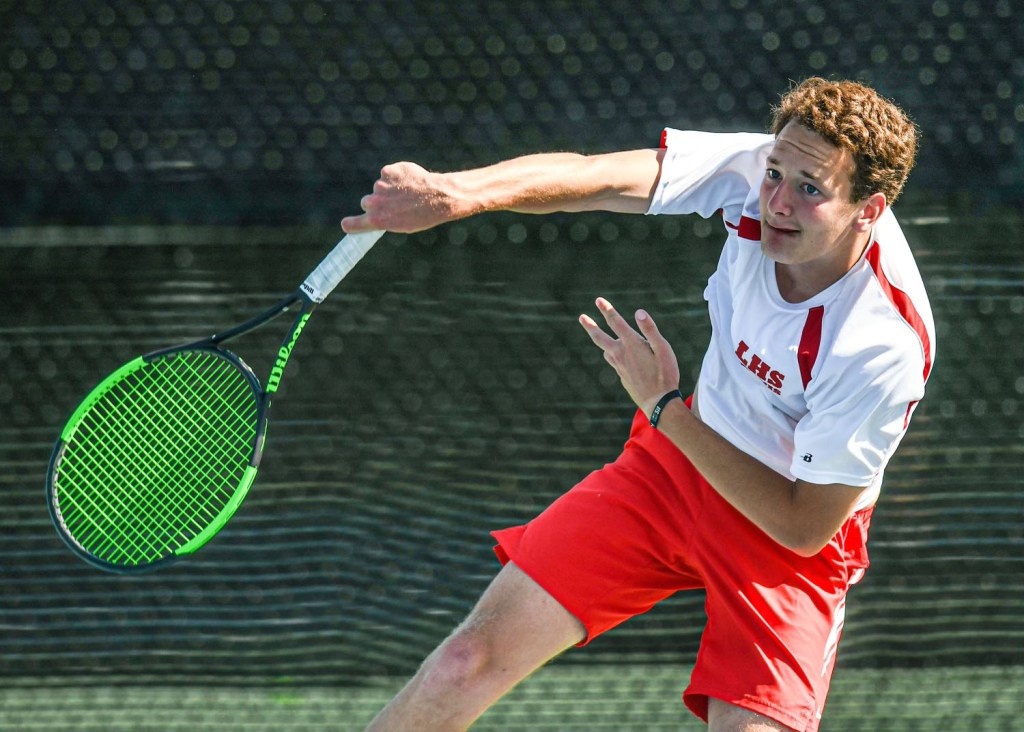 Lafayette’s Nate Leary serves during his singles match against Ridgeland in the first round of the Class 5A tennis playoffs at the John Leslie Tennis Complex on Thursday, April 8, 2021. (Bruce Newman)

Making up for a lost season a year ago due to the COVID-19 pandemic, the Lafayette tennis team played one of their toughest schedules this year and it paid off.

The Commodores began their journey back to another state championship appearance with a dominant 7-0 win over Ridgeland in the first round of the MHSAA Class 5A playoffs on Thursday at the John Leslie Tennis Complex.

Making quick work of the the Titans, Lafayette lost only five points combined across the seven matches. None of the matches went to a third set.

Playing against 6A powerhouse Madison Central among other tough teams in the regular season, Lafayette (8-7) found themselves prepared for a postseason run.

“Tougher this year than I’ve ever scheduled,” Lafayette head coach Debbie Swindoll said of her team’s opponents this season. “Really for that purpose, because I knew for us to get where we needed to be we need to play as hard as we can play. So that the event won’t look too big for us.”

In the boy’s doubles matches, the teams of Crosse Lindsey and Brett Lampton along with Keegan Rico and Porter Lindsay each won their matches by a score of 6-1, 6-0.

The girl’s doubles teams of Lucy Wilson and Jerra Lampton along with Hundson Lindsay and Val Smith each won their matches 6-0,6-0.

“I feel good. I feel that if we play to our potential I think we should (be in the state championship),” Swindoll said. “That’s what we’re preparing for. I feel like we’ve got a really good shot this year.”

Lafayette awaits their opponent for the second round, which will take place next week.