No. 3 Ole Miss splits doubleheader with No. 2 Arkansas to force Sunday rubber match 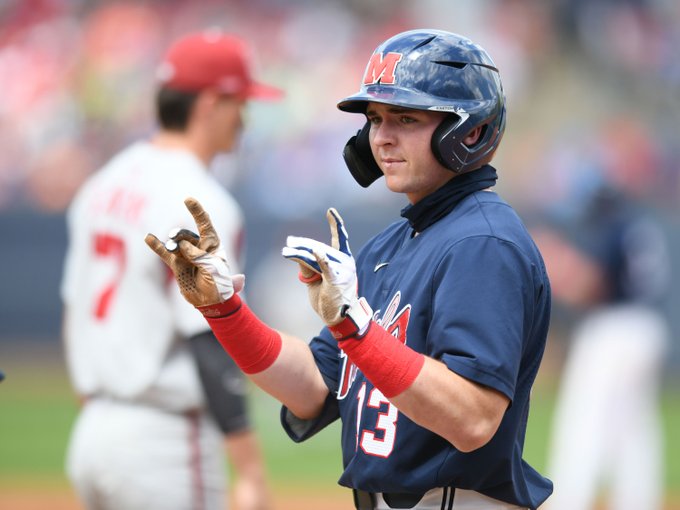 Similar to two years ago in June, it will come down to a deciding third game between Ole Miss and Arkansas.

In a rematch from the 2019 Super Regional round, the No. 3 Rebels and No. 2 Razorbacks split Saturday’s doubleheader at Oxford-University Stadium. The two top teams in the Southeastern Conference Western Division will settle the series in Sunday’s same.

The Rebel offense exploded in the eighth inning of Game 2, scoring 5 runs to break the game open. After scoring only three runs off 14 hits in Game 1, the Ole Miss bats scored 13 runs off 18 hits in Game 2.

“It just shows the resiliency (of this team),” Broadway said. “Coach (Bianco) just emphasized how we got punched in the mouth there in the first game and it was a tough loss. Then coming out in the second game obviously jumping on them but then at the same time they punched in the mouth a little bit coming back. But it was good to see us respond.”

Broadway worked the final 2.2 innings of Game 2, giving up one run off four hits while striking out three to earn his eighth save of the season.

Catcher Hayden Dunhurst had a career day against the Razorbacks, hitting a combined .700 (7-for-10) with 5 RBIs, a double and a triple in both games.  Dunhurst went 5-for-5 with 2 RBIs and the double in Game 1.

“In that second game, I just thought we stopped missing our pitches,” Dunhurst said. “We started hitting more on time with the fastball or we would sit curveball and we wouldn’t miss our pitch when we got it.”

Ole Miss starters Gunnar Hoglund and Doug Nikhazy provided quality outings for the Rebels on Saturday. In Game 1, Hoglund worked 5.1 innings of two-hit baseball and gave up three runs, two of them earned, while walking five batters and striking out eight.

Nikhazy made it 5.2 innings and gave up 4 runs, two of them earned, off seven hits while walking two and striking out seven.

“I was really happy with the way we responded. It’s tough when you lose the first game of a doubleheader,” Bianco said. “We challenged them a little in the locker room and I liked the way we responded. …In Game 2 we were just better. We were better offensively and you can tell why (Arkansas is) so good. They don’t go away.”

The deciding third game is set for 1:30 p.m. CT on Sunday and will air on SEC Network +.