No. 3 Ole Miss unable to complete comeback against No. 2 Arkansas, drops series 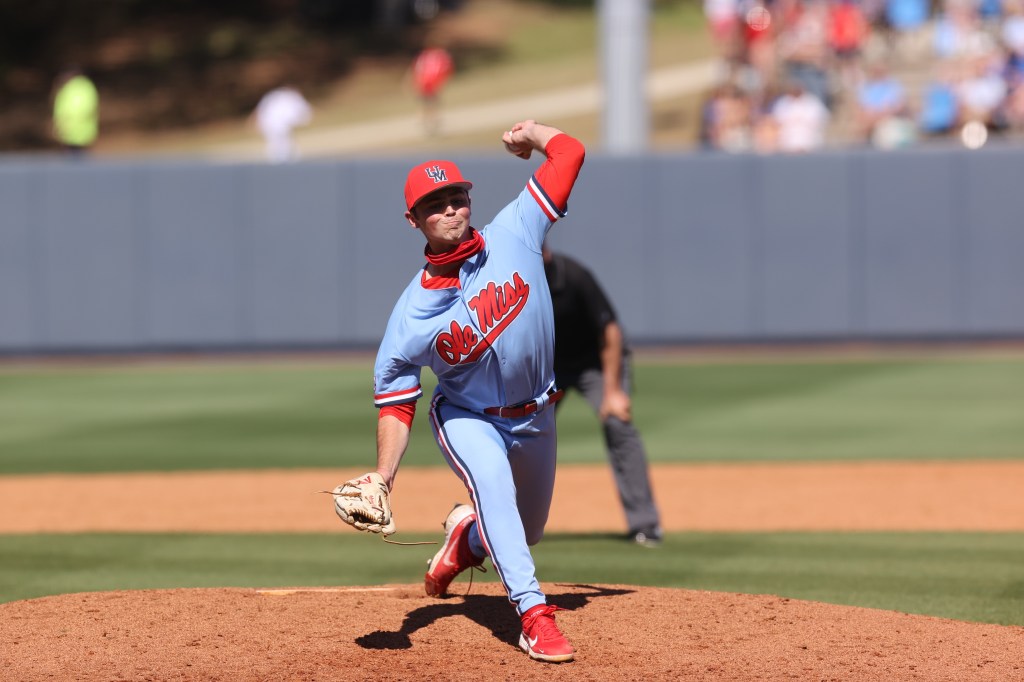 In what could potentially be a teaser for a postseason showdown later this year, Ole Miss and Arkansas provided excitement as two of the top baseball teams in the country jockeyed for a crucial series win on Sunday.

After trailing 11-0 the first two and a half innings, No. 3 Ole Miss managed to tie the game at 14-all late but was unable to complete the comeback as No. 2 Arkansas won 18-14 in the rubber match at Oxford-University Stadium.

The Razorbacks (26-5, 9-3 Southeastern Conference) claimed the series after winning the first game of Saturday’s doubleheader. Ole Miss (24-8, 8-4) avoided the sweep with their 13-6 win in Saturday’s nightcap.

After falling behind 11 runs, the Rebels responded 14 runs between the third and seventh innings to tie the game. Arkansas took advantage of a worn down Taylor Broadway, who was asked to try and get the final six outs after going 2.2 innings on Saturday, scoring three runs the final two innings.

“You’re down 11-nothing and it didn’t look good,” said Ole Miss head coach Mike Bianco. “I think it’s human nature to kind of concede, mentally, and kind of go through the motions and they didn’t do that. They competed for nine innings and for that I’m proud. But, I will say you don’t get any trophies for just continuing and just competing.”

Pitching was not on display in Sunday’s finale with both starters unable to make it out of the third inning. Rebel starter Derek Diamond did not last two full innings, leaving after 1.1 innings pitched and gave up four runs off four hits while walking one and striking out another.

The Ole Miss bullpen struggled to keep Arkansas off the bases, walking 16 more batters in relief of Diamond.

“Unfortunately, we were too bad on the mound. We never gave ourselves a chance to win the game,” Bianco said.

In the fifth inning, Bianco was arguing balls and strikes and the home plate umpire heard enough and ejected the Rebel head coach. Following Bianco’s ejection in the top-half of the frame, the Rebels scored nine runs the next three innings which led to the game becoming tied.

“Surprisingly, it kind of pumped us up,” said second baseman Peyton Chatagnier on Bianco’s ejection. “He’s our guy. He’s our head coach. We’re going to go fight for him everyday and he’s going to fight for us. So, in a way it got us pumped. I think it had a lot to do with how we came back.”

Chatagnier went 3-for-6 at the plate with four RBIs and two doubles. Justin Bench went 3-for-4 with three RBIs

Ole Miss hosts Austin Peay on Tuesday at 6:30 p.m. CT before heading to Starkville for another crucial SEC series, beginning Friday. Both the Rebels and Bulldogs are sitting in second place in the Western Division.

No. 3 Ole Miss splits doubleheader with No. 2…