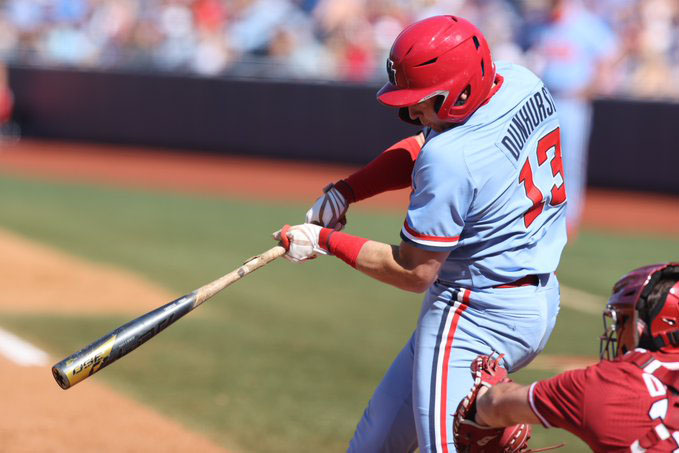 Ole Miss catcher Hayden Dunhurst takes a swing during their game against Arkansas at Oxford-University Stadium on Sunday, April 11, 2021. Dunhurst is one of many Rebel hitters that will help to fill the void at the plate left by Tim Elko, who suffered a torn ACL last week. (Joshua McCoy/Ole Miss Athletics).

The Ole Miss baseball team’s quest to replace the offense missing from the lineup with the absence of Tim Elko began this past week against Alcorn State and No. 1 Arkansas.

While the result on the scoreboard did not go their way two out of three times, the No. 6 Rebels impressed at the plate without their captain and leading hitter, who is out with a torn ACL.

In their weekend series against the Razorback pitching staff, Ole Miss (25-8, 8-4 Southeastern Conference) scored 30 runs off 46 hits and had at least 14 hits in all three games at Oxford-University Stadium. In Saturday’s doubleheader, the Rebels recorded a combined 32 hits in both games.

With Elko out, for at least the foreseeable future while he begins a rehab program that might allow him to return later this season without the need of surgery first, the top of the Ole Miss lineup shined against Arkansas.

The top five hitters in the Rebel lineup — which were Jacob Gonzalez, Peyton Chatagnier, Kevin Graham, Hayden Dunhurst and Justin Bench — combined for a .431 batting average (31-for-72) over the weekend.

“One of the things that we’ve said is, we’re not going to be able to replace (Elko),” said Ole Miss head coach Mike Bianco. “We’re not going to get a guy who just hits .350 and hits nine or 10 home runs the second half of the seas, more than likely. What happens, hopefully, is you get bits and pieces from other guys like (Hayden) Leatherwood who is capable and just hasn’t done it yet to this point.”

While Leatherwood has struggled at the plate this season, the outfielder showed signs of turning it around over the weekend. He hit a pinch-hit single in the Game 1 of Saturday’s doubleheader then followed it up with a three-run home run in the nightcap.

The offense may not be in a dire situation without Elko, as some may have feared, as the Rebels reach the midway point of the SEC schedule this weekend at No. 4 Mississippi State (25-7, 8-4). What may have suddenly become an issue is the Ole Miss pitching staff behind starters Gunnar Hoglund and Doug Nikhazy.

On Sunday, the Rebel pitchers combined for 17 walks against the Arkansas lineup. Starter Derek Diamond only gave up three of those walks but had his own struggles, exiting the game after 1.1 innings of work and giving up five runs.

The Ole Miss bullpen combined for 14 walks and only six strikeouts and allowed 13 runs in Sunday’s 18-14 loss.

“We didn’t throw (Arkansas) enough balls into the strike zone,” Bianco said after Sunday’s game. “You walk 17 guys and hit two (batters), that’s 19 base runners. That’s over two an inning. You’re just not going keep another team from scoring, let alone a really good offense like Arkansas. …I can’t remember a day that we were that bad on the mound. We’ve given runs and hits and stuff like that, and home runs, but today it was the walks. Didn’t have it on the mound.”

Ole Miss now looks to turn things around after losing back-to-back series as they head to Starkville and take on a red-hot Mississippi State team that has won their last six SEC game with sweeps over Kentucky and Auburn.

First pitch for Friday’s series-opener is scheduled for 6 p.m. CT. The game will air on SEC Network.