Oxford tennis defeats Germantown to advance in 6A playoffs 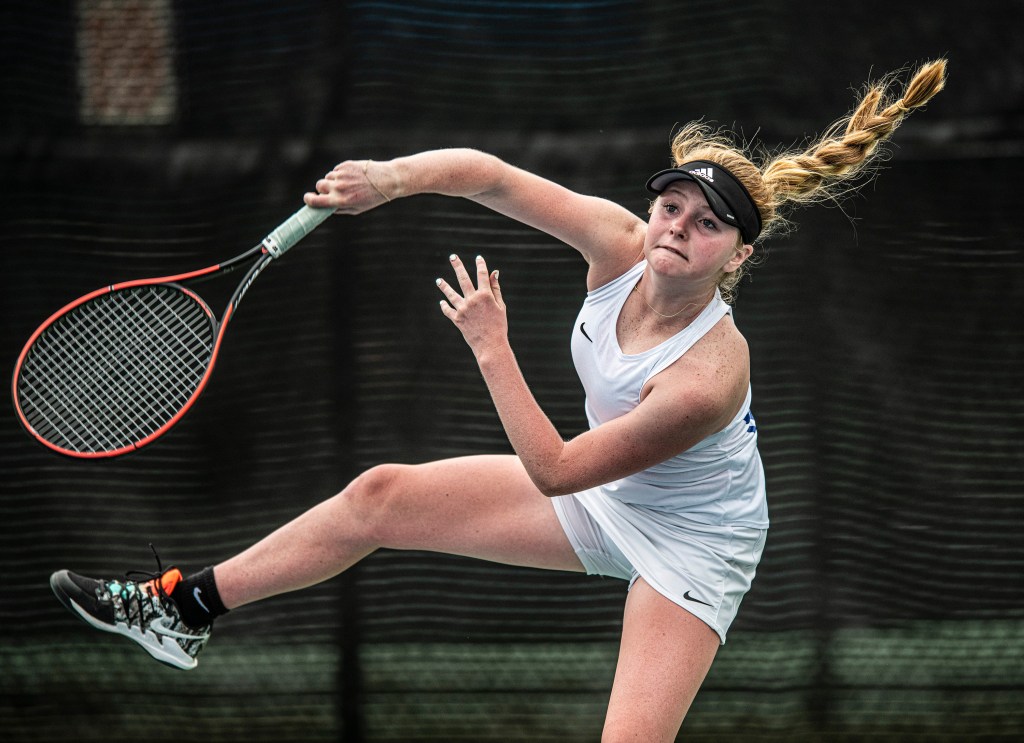 Oxford’s Owen Wilkinson serves during her match against Germantown’s Erin Olander in the first round of the MHSAA Class 6A state playoffs at the John Leslie Tennis Center on Tuesday, April 13, 2021. The Chargers won 6-1 to advance to the second round. (Bruce Newman)

After a lost season in 2020 due to the COVID-19 pandemic, the Oxford tennis program looks to be back its old championship-winning ways again in 2021.

The Chargers defeated Germantown 6-1 at the John Leslie Tennis Center on Tuesday in the first round of the MHSAA Class 6A state playoffs. It was a swift victory that was reminiscent of the Oxford teams that rattled off 10-straight state titles.

Last year, Oxford and every other tennis team in the state were able to only play a handful of matches before the season was canceled due to the pandemic. This season, the Chargers came back strong and finished with a regular season record of 16-1.

“We may not have the best player, but one to six (on the roster) I think we’re as good as we’ve ever been,” said head coach Louis Nash. “Kids just want to come out and play. Period. That’s all they want to do. It’s like a second-grader going to recess. He just wants to go out and play and that’s all our bunch wants to do.”

Oxford split the singles matches with Owen Wilkinson defeating Germantown’s Erin Olander 6-1, 6-0 in the girl’s match while Germantown’s Wallace Brewer defeated Downing Koestler in a tiebreaker 4-6, 6-7 (4-7) in the boy’s match.

The Chargers swept the all of the doubles matches. In the girl’s doubles the team of Mary Shipman and Bel Monteith defeated Julianna Jordan and McKenzie Cox 6-0, 6-0 while Oxford second girl’s doubles team of Emma Jones and Addie Grafton won their match against Ava Tidwell and M. Leigh Williamson 6-0, 6-1.

The Chargers now advance to the second round, where they will play another 6A powerhouse in Madison Central on Thursday at the Ridgeland Tennis Center. Thursday’s match against Oxford and the Jaguars almost feels like the 6A state championship with the winner becoming the heavy favorite to win the 6A crown next week in Jackson.

Oxford and Madison Central faced on twice during the regular season, both times at the Chargers home court. The pair split the matches, with Madison Central the lone blemish on Oxford’s record. The Chargers won the first match 4-3 in early March and then Madison Central returned later in the season and left with a 6-1 victory where four of the matches went to a third set tiebreaker.

“It will be a scrap and will be as good as high school tennis is going to be in the state, this year,” Nash said of Thursday’s match. “As many lineups as you want to try and create, at the end of the day our best kids will have to beat their best kids. As coaches what else are you going to ask for? There are no holes in either lineup so there’s not a lot of tricky lineups going on. It’s going to be fun.”

Thursday’s second round match will start at 2 p.m.