Three Oxford seniors to continue athletic careers at the next level 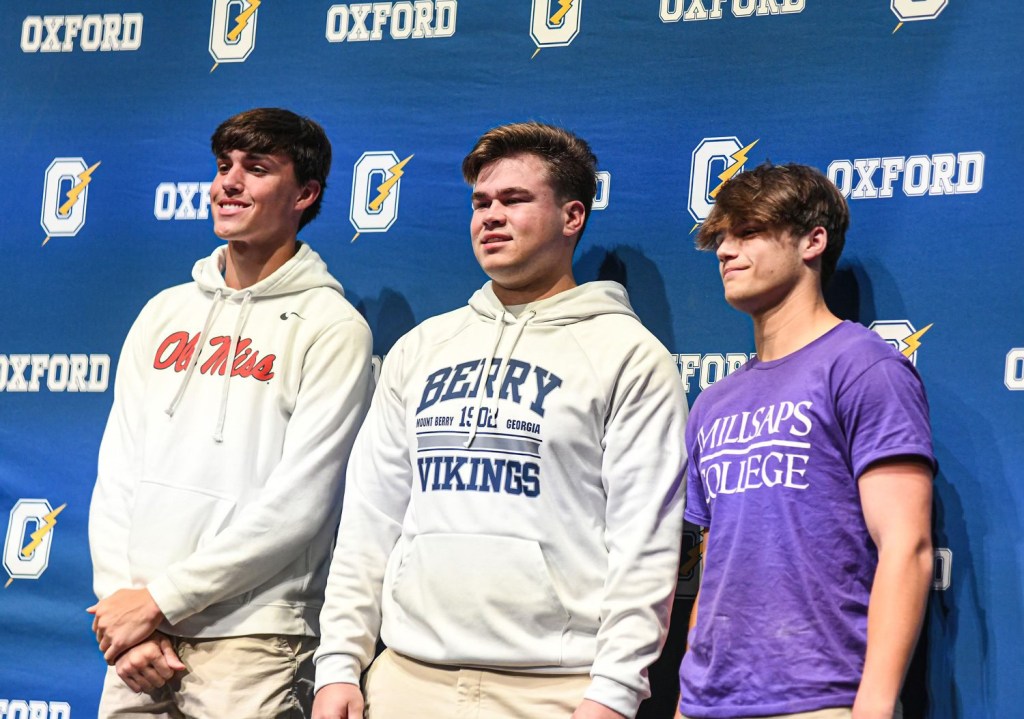 Chase Rose, Connor Bradley and Henry Moss all signed with four-year schools during a ceremony inside the OHS Fine Arts Building.

Rose, who is in the midst of the track & field postseason, signed with Ole Miss, where he will continue his running career for four more years with the Rebels. In November, Rose helped lead the Oxford cross-country team to a runner-up finish in the MHSAA Class 6A state meet and was the individual 6A state champion.

Rose broke a 19-year-old record on the state championship course at Choctaw Trails in Jackson, completing the the course in 15 minutes and 51.59 seconds. He finished 25 seconds ahead of D’Iberville’s Kevin Cooley.

In track & field, Rose won the 800 and 1600 meter runs in last week’s 2-6A divisional meet and is competing in the Regional Championship at Lewisburg High School on Saturday.

“From day one (Rose has) come in and he set the tone,” said Chris Patton, head coach of Oxford’s track & field and cross-country teams. “He did that and then he pulled other guys along with him. They wanted to be on his level. They saw he was working hard to even be better. Even though he was the best. That was very contagious and something we needed as a team.”

Representing Oxford’s football team, Bradley and Moss signed with two Division III schools to further their careers at the collegiate level. Their signings made 12 players from Oxford who will play football at the next level this fall, setting a new program record for one signing class.

An unsung hero of the Chargers defensive line, Bradley helped set the tone of each play at nose tackle. He contributed to an Oxford defense that held opposing offenses to 132 yards per game during his time on the defensive front. Bradley finished his career with 45 total tackles, including eight for a loss and three sacks.

Bradley signed with Berry College out of Berry, Ga.

“Playing nose (tackle) a lot of times doesn’t get a lot of glory. You’re not the making a lot of tackles but you’re playing a big part in opening up the path for linebackers,” said Oxford head football coach Chris Cutcliffe. “Guys like Connor in front of them doing their job is what allows for (linebackers to rack up tackles). Connor’s been a huge part of defensive line.”

Moss, who was one of many Charger receivers that posed a threat last year, signed with Millsaps College out of Jackson. He also served on Oxford’s special teams unit during the 2020 season.

“Henry was a great leader in our receiver group,” Cutcliffe said. “Tremendous work ethic and I think made our offense, and made that group in particular, better with how he went about his business on a daily basis.”