Offense comes to life for No. 6 Ole Miss as they even series with No. 4 Mississippi State 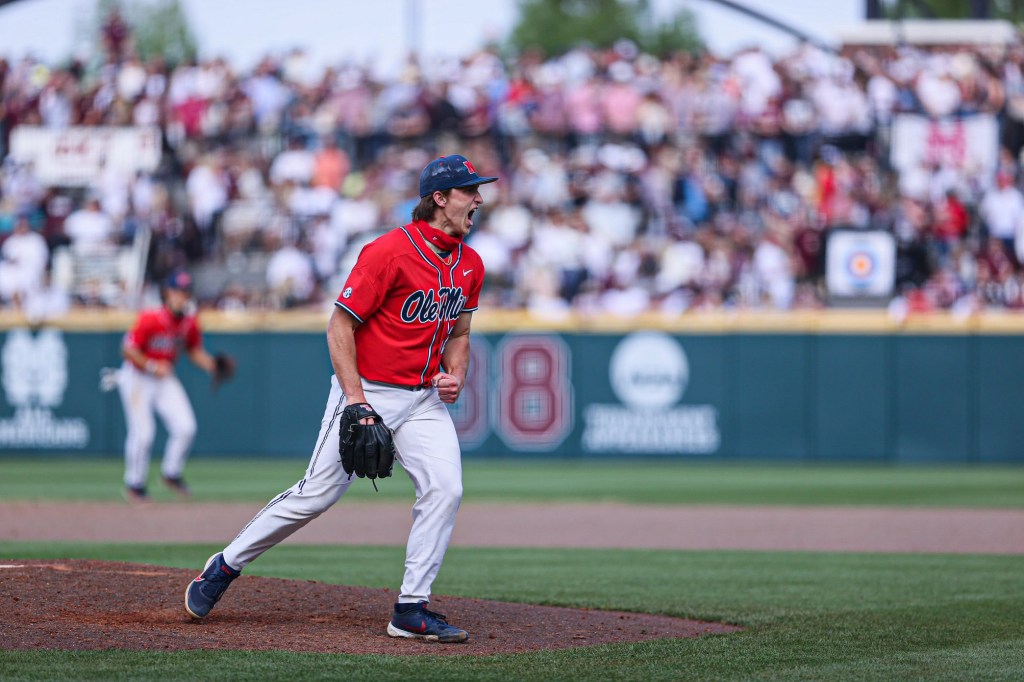 STARKVILLE — Never has there been a more dominant “Doug Day” than there was on Saturday.

Doug Nikhazy had a masterful outing on the mound while the Ole Miss baseball team found their offense to set up a crucial rubber match with instate rival Mississippi State.

The No. 6 Rebels took the second game of the weekend, defeating No. 4 Mississippi State 9-0, at Polk-Dement Stadium and tying up the crucial Southeastern Conference series. The win snaps a seven-game losing streak to the Bulldogs.

Nikhazy had the best outing of his career, in a game when the Rebels needed it the most. Nikhazy pitched his first complete game in a Rebel uniform, striking out 12 and gave up only one hit. The dozen strikeouts ties a career-high and sets a new career-high in an SEC game for Nikhazy.

Saturday’s performance was the first complete nine-inning game thrown by an Ole Miss pitcher since Christian Trent did it against Auburn on April 5, 2014. Trent also threw a complete game in an eight-inning loss to Missouri on May 1, 2015. The last time Ole Miss had a pitcher hold an opponent to one hit was Adam Yates against Southeastern Louisiana on Feb. 14, 2001.

Former Sunday starter Derek Diamond pitched one inning of relief during Friday’s game, but the Rebels have yet to use a regular bullpen arm this weekend.

“Everything started off normal and, I mean, I don’t necessarily expect to throw nine (innings) every time I’m out there,” Nikhazy said. “Once I got to about the fifth or sixth I had my dugout there to pick me up whenever I needed a little boost. …I was ready to go, but I think with a little more starts under my belt I’m starting to get more comfortable. Getting through those first innings quicker.”

Offense came from up and down the lineup for Ole Miss (26-9, 9-5 SEC), who scored nine runs on 17 hits. The Rebels ran off Mississippi State starter Will Bednar after three-plus innings. Bednar picked up his first loss of the season and gave up six runs off seven hits and walked two.

The Rebels scored at least one run in all but three innings, scoring in the first six innings for an 8-0 lead at that point. They added another run in the seventh.

What has not been a constant source of production through the season, the bottom half of the Rebels’ lineup on Saturday hit .444 (8-for-18). First baseman Cael Baker went 2-for-2 with a double and 2 runs batted in and Ben Van Cleve went 2-for-2 with a double and an RBI as pinch hitter. Hayden Leatherwood hit a solo home run to lead off the seventh.

Catcher Hayden Dunhurst led the way in the top half of the order, going 3-for-3 with a double and a RBI.

“Offensively, we were really, really good today,” said Ole Miss head coach Mike Bianco. “Seventeen hits against a pitching staff that can really pitch it. All around, really proud of them.”

Ole Miss and Mississippi State (26-8, 9-5) meet in the rubber match on Sunday with a first pitch scheduled for 1 p.m. CT. The game will air on SEC Network +.