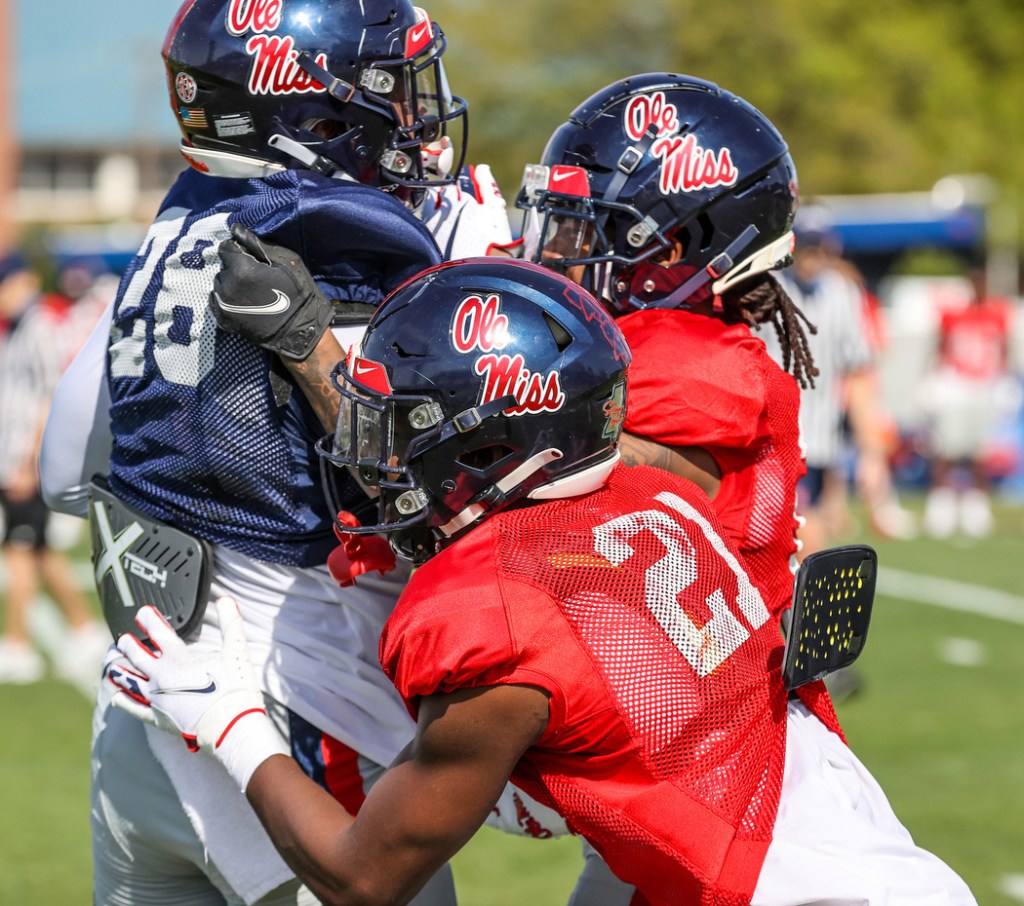 Ole Miss tight end Demarcus Thomas (28) is tackled by densive back A.J. Finley (21) and another Rebel defender during Spring practice on March 30th, 2021. Thomas returned to the field after suffering an injury scare during a regular season practice in November. (Joshua McCoy/Ole Miss Athletics)

Demarcus Thomas is no stranger to suffering an injury on the football field, but when he was airlifted to a Memphis hospital in November, things were different.

During a normal practice in the midst of the 2020 season, the Ole Miss tight end found himself unable to move after what appeared to be a routine hit during a drill. Thomas was rushed to the hospital due to what head coach Lane Kiffin said was an inability to feel any sensations or move while they awaited the helicopter to land on the practice field.

Now, five months later, Thomas finds himself back on that same practice field as he, and the rest of the Ole Miss team, participates in spring drills for the first time in two years.

Getting back to the field was a difficult path for Thomas, who was discharged around 7:15 p.m. the same day he was flown to the hospital. With the help of Kiffin, and strength coach Wilson Love, Thomas slowly worked his way back.

Spending time talking with Love and other members of the Ole Miss medical staff, Thomas said he found inspiration from another Rebel who suffered an injury on the field in Chucky Mullins.

“They said something that always stuck out to me,” Thomas said. “They sent me a picture of the Chucky Mullins head, and it says never give up. That really stuck with me. There were times where I didn’t know if I was going to keep being able to do the things that I love. But with my team behind my back, keeping encouraging me, I’m so happy for them accepting me back and letting me work.”

Mullins, whose injury has been heavily documented, attempted to make a tackle against Vanderbilt’s Brad Gaines during their game in 1989. The seemingly innocuous and routine tackle left Mullins paralyzed from the neck down. He passed away two years later, but has become a legend in Ole Miss history and a constant source of inspiration to current and former players.

Thomas said he did not consider hanging up his helmet following the injury, his second of a similar nature. During his high school career, the Ole Miss sophomore said he also suffered the same injury and that doctors are not sure what is causing him to be vulnerable to that specific injury.

The Whatley, Ala. native said he is using his most recent injury scare as a learning tool and searching for smarter and safer ways to play the game he loves.

“I’m slowly finding smarter ways to play and better ways to get the job done,” Thomas said. “I think about the transition from last year to this year, I feel like last year I was a little bit more wild and loose. I wasn’t really under control with my body. Now I’m just more under control, defined in my routes, blocking, making sure technique is right. That’s really helping me.”