Bullpen woes plague No. 6 Ole Miss in series loss to No. 4 Mississippi State 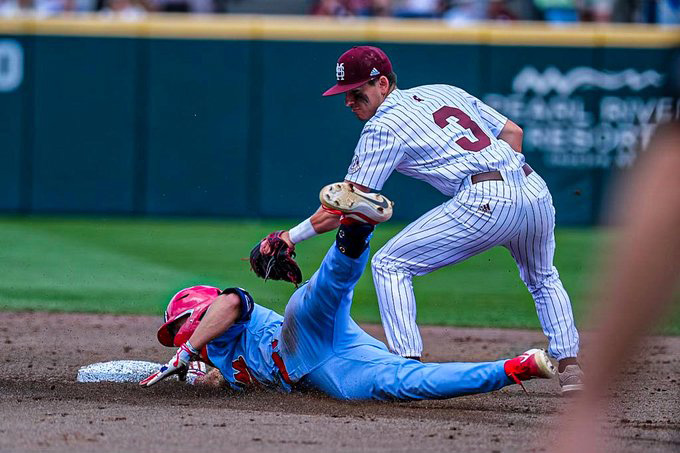 Ole Miss third baseman Justin Bench slides into second base in the second inning during their game against Mississippi State at Polk-Dement Stadium in Starkville on Sunday, April 18, 2021. The Rebels lost the game 7-5. (Mississippi State Athletics)

STARKVILLE — Drew McDaniel did what was ask of him in Sunday’s rubber match against No. 4 Mississippi State — the Ole Miss bullpen did not.

The No. 6 Rebels dropped the final game of the weekend series, 7-5, to the Bulldogs at Polk-Dement Stadium and lost their third consecutive Southeastern Conference Series after sweeping their first two.

In his first weekend start, and first SEC start, McDaniel provided stability to the Sunday starting spot in the rotation. McDaniel worked 5.1 innings, giving up two runs off three hits while striking out four Bulldog batters and walked two more.

After getting a quick out in the sixth inning, a fly-out to left field, McDaniel was pulled with Josh Mallitz coming out of the bullpen. From there, things unraveled for the Rebels as Mississippi State scored five runs in the sixth, including a bases-clearing triple by Tanner Allen to make it a 7-4 Bulldog lead at the time.

Mallitz gave up three straight hits before being replaced by Austin Miller. Miller lasted a third of an inning, giving up two runs off three hits. Ole Miss (26-10, 9-6 SEC) turned to closer Taylor Broadway the final 2.1 innings and kept the Bulldogs from expanding their lead.

After recording 17 hits a day earlier, the Rebel bats were kept in check on Sunday with five runs off six hits. There were a couple chances where the Rebels could have blown the game open in their favor but did not get the timely hits that seem elude their lineup more times than not.

With the bases loaded after tying the game up off a Hayden Dunhurst walk in the third inning, Justin Bench flied out to center field on the first pitch against Bulldog reliever Houston Harding to end the threat. Bench also hit a ground ball on the first pitch of his at-bat with the bases loaded to end another threat after the Bulldog’s sixth inning.

The lone bright spot at the plate for the Rebels was right fielder Hayden Leatherwood who hit two home runs, each giving the Rebels the lead. Leatherwood finished 2-for-4 with three runs batted in and had three home runs in the series.

“It’s six hits, but that’s where you miss to really break the game open,” Bianco said. “That’s what it comes down to. In those big moments do you get the big hit or does your pitcher make the big pitch and get off the field. Today they did and we didn’t.”

Ole Miss returns home to host Little Rock on Tuesday before hosting LSU for a three-game series starting on Thursday.

Offense comes to life for No. 6 Ole Miss…