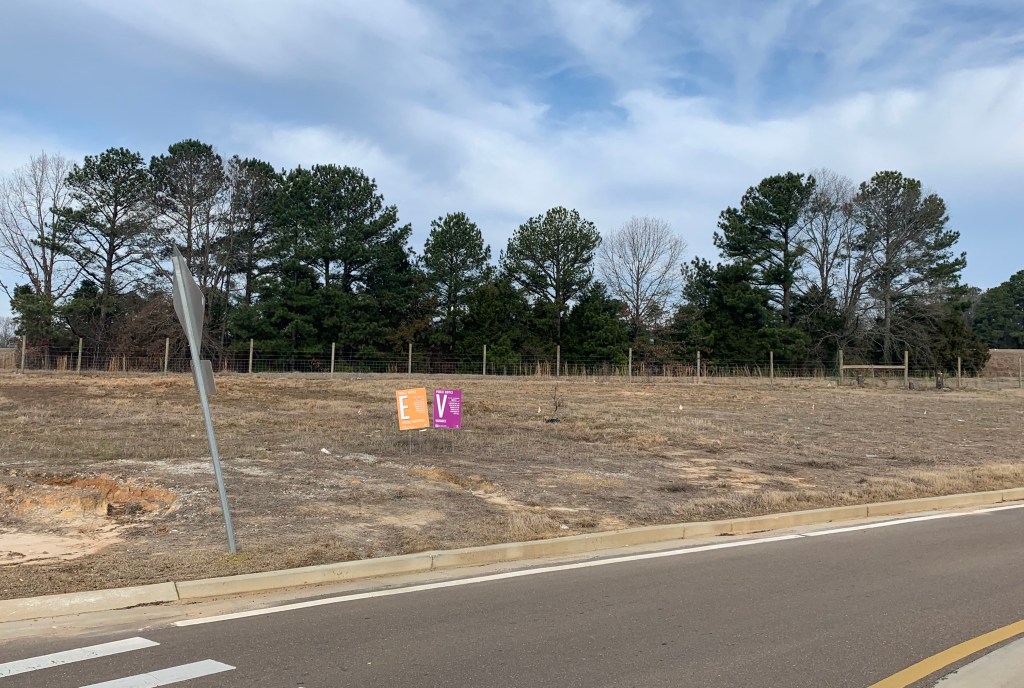 Oxford’s Waffle House is relocating south on Ed Perry Boulevard near the roundabout on Sisk Avenue. The national food chain announced it was bringing a restaurant to Oxford in 2019 but progress was halted duruing the COVID-19 pandemic last year. The restaurant is estimated to be completed at the new location within the next couple years. (Jake Thompson/Oxford Eagle)

The Oxford Board of Aldermen upheld the approvals made by the Oxford Planning Commission regarding a new location for the upcoming Waffle House, but said they would like to see the public’s involvement in the final process.

During Tuesday’s regular meeting, the Board listened to comments made by concerned residents of the Oxford Commons neighborhood, who feel the new location just off Sisk Avenue poses a dangerous traffic situation.

An appeal of the Planning Commission’s decision last month to approve a special exemption and a variance request by Waffle House was presented to the Board. More than 60 names were attached to the appeal, including Dick Dickerson’s. Dickerson submitted a letter to the planning commission in March, stating his objections to the newly-planned location for the Waffle House.

Dickerson addressed the Board on Tuesday, representing those who joined him in appealing the decision, and continued to voice his discomfort over where the restaurant is still intended to be located.

“I’m a Waffle House fan, I’ll tell you that, but not at this location,” Dickerson said to the Board. “Their business model is 24-7, 365 days a year and we think that that type of business located on the roundabout at Sisk and Ed Perry (Boulevard) will adversely affect the public interest.”

Dickerson’s appeal specifically dealt with the build-to and setback lines, along with the parking variance granted to Waffle House. Oxford Planning director Ben Requet spoke to the Board and addressed Dickerson’s comments, noting the final site plan was still under review by the planning staff and that some of those concerns were addressed and being addressed with the engineer on the project.

Drew Joiner, Real Estate Director for Waffle House, was in attendance and also spoke to the Board. He noted other commercial restaurants that are being developed in similar proximity to where the Waffle House intends to be built and the roundabout.

“Touching on the point of having a commercial entrance to a restaurant so close to a roundabout, I would note the El Charro Mexican restaurant directly to the east of the site is also a commercial restaurant entrance that’s already existing,” Joiner said.

Due to the site being less than 5,000 square feet, Requet told the Board the final site plan does not have to be brought to the Planning Commission as a public hearing item at an upcoming meeting and can receive administrative approval without debate.

If the item is discussed at a public hearing, the Planning Commission will review the technical aspects of the site plan and not vote solely on if the Waffle House should be built at the proposed location.

“That concerns me a little bit, that there’s so much interest in this development that the public won’t have any way to review or add input into the site plan,” Antonow said.

With the final site plans still being under review a timeline for when it would be brought to the Planning Commission is not known. The commission meets on the second Monday of each month at 5 p.m. in the City Hall courtroom.