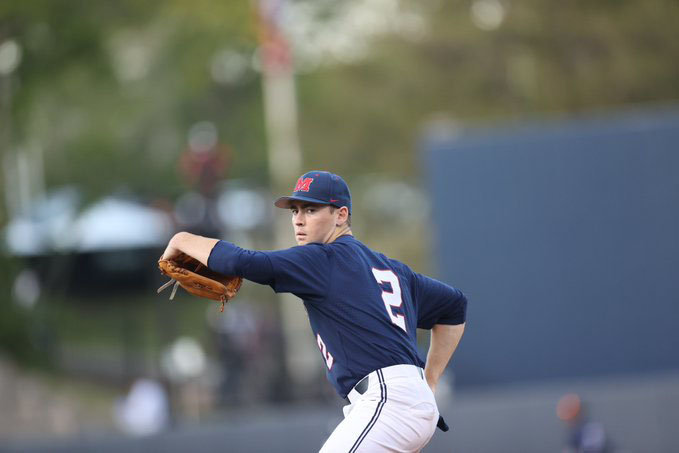 Once again the Ole Miss baseball team held a lead late into a game and once again the bullpen failed to keep it.

The No. 12 Rebels fell to LSU 5-4 in the series opener at Oxford-University Stadium on Thursday, dropping their second straight Southeastern Conference game.

With a two-run lead in the top of the seventh, LSU scored three runs off closer Taylor Broadway who came for relief of starter Derek Diamond. Broadway worked the eighth and ninth innings without giving up a run, but threw 47 pitches and more than likely out for the rest of the series.

“Tonight, I just don’t think the fastball was electric,” said Ole Miss head coach Mike Bianco of Broadway’s outing. “We went breaking ball early because that’s how Diamond pitched and was able to navigate through. I think some pitches just caught a little too much of the plate tonight for him. There’s time tonight where he certainly didn’t have his best stuff but there were times tonight he showed why he’s so good. (LSU) had times tonight to really blow the game open and he wouldn’t relent.”

Similar to last Sunday’s finale at No. 3 Mississippi State, a three-run inning allowed by the bullpen cost the Rebels (27-11, 9-7 SEC) a chance for a key conference victory.

Diamond got the start on Thursday on short notice after regular Friday starter Gunnar Hoglund was late scratch due to feeling some stiffness after his start last week in Starkville.

The former Sunday starter went from being removed from the weekend rotation one week to being asked to leadoff the weekend series the following week and performed well. He went six-plus innings, giving up four hits and three runs with only one of them earned while striking out four batters and did not issue a walk.

After a start to the game, which saw the Ole Miss defense make three errors that allowed a run to score, Diamond settled in and threw five scoreless innings.

“Once I found out, it was my normal routine at the facility,” Diamond said. “I definitely felt good. I was never worried before, obviously a few rocky starts, but today I felt good. I felt myself. Most of my pitches were working.”

All four of the Rebels runs were scored with the aid of the long ball. Three home runs from Kevin Graham, Hayden Leatherwood and Jacob Gonzalez provided the only offense on Thursday.

Ole Miss will look to tie the series up on Friday with first pitch set for 6:30 p.m. CT. The game will air on SEC Network+