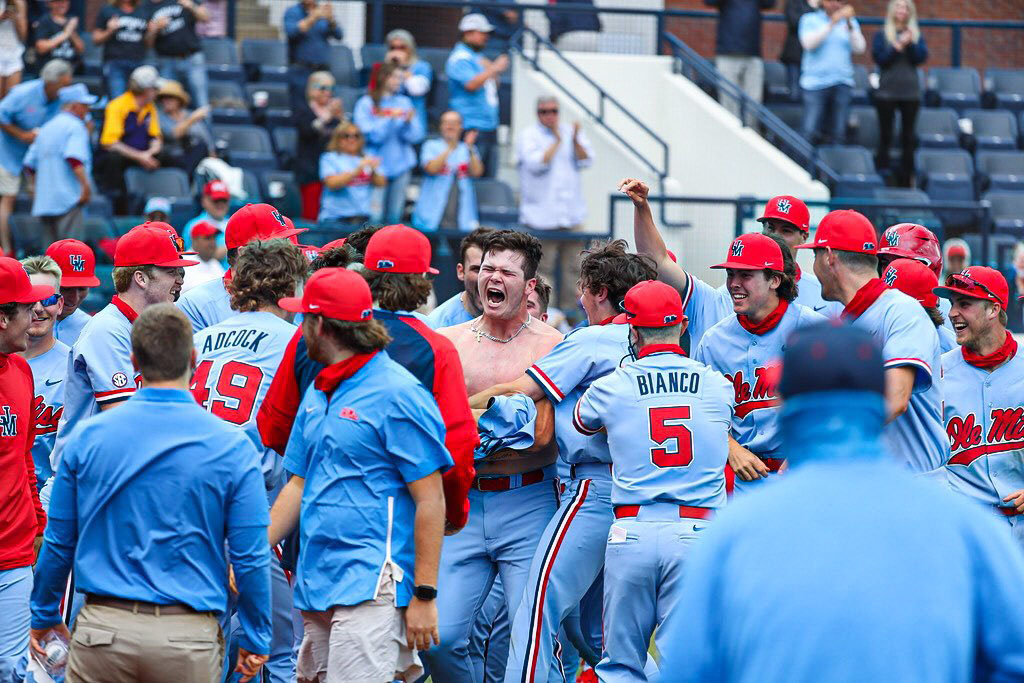 The Ole Miss baseball team celebrates after Kemp Alderman’s walk-off home run in the bottom of the ninth inning against LSU at Oxford-University Stadium on Saturday, April 24, 2021. The Rebels won 10-9 to avoid being swept by the Tigers. (Petre Thomas/Ole Miss Athletics)

On Tuesday morning Kemp Alderman was still redshirting his freshman season with the Ole Miss baseball team, but on Saturday he very well may swung the Rebels’ season back on track.

Aldermen took the first pitch in the bottom of the ninth inning 421 feet the other way over the right center field wall, giving the No. 12 Rebels the comeback 10-9 win over LSU at Oxford-University Stadium on Saturday. The win avoiding a sweep by LSU, who had already claimed the series in their 7-2 win on Friday.

The true freshman made his third appearance of the season on Saturday after getting his first start earlier in the week against Little Rock.

Prior to Alderman’s first career home run, Ole Miss (28-12, 10-8 Southeastern Conference) rallied for eight runs in the bottom of the eighth inning with two outs to tie the game at 9-all. A grand slam by TJ McCants brought the Rebels back level with LSU (24-15, 6-12).

“As soon as I hit it I knew it was gone and I kind of blacked out after that,” Alderman said. “It was just a crazy feeling. One I will never forget. …(My teammates) were hitting me really hard (in the celebration), but I didn’t feel too much pain because I couldn’t really feel my body at the time. It was an awesome experience.”

Drew McDaniel got his second start on a SEC weekend and did not have the same success against LSU as he did against Mississippi State six days ago.

McDaniel went 2.2 innings, giving up six runs off nine hits and struck out three LSU batters. Austin Miller, Jack Dougherty and Tyler Myers worked in relief ahead of closer Taylor Broadway who entered in the ninth. Broadway picked up his fourth win of the season, improving to 4-1, after working an inning.

“It’s something we needed. Obviously, it hasn’t been a good few weeks for us,” said Ole Miss head coach Mike Bianco. “Really, this weekend, we played as poorly as we have all year and probably for several years.”

Ole Miss returns to O-U Stadium on Friday when the host South Carolina for a three-game series next weekend.