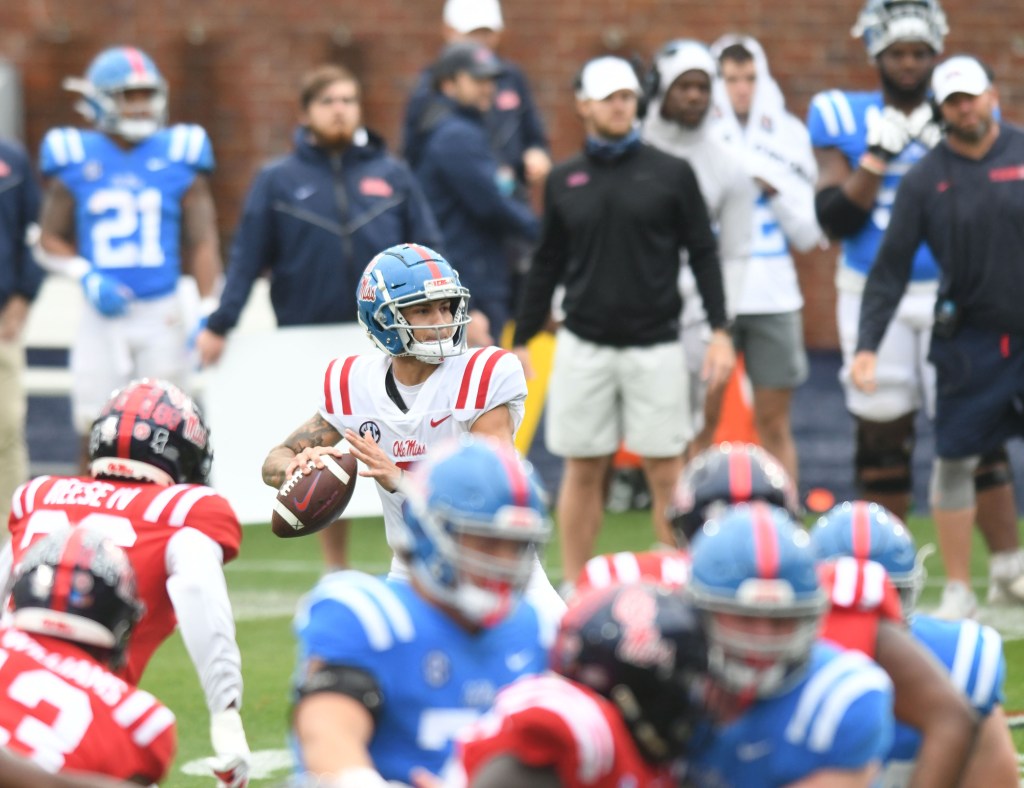 The first spring practice in two years concluded for the Ole Miss football team on Saturday with its annual Grove Bowl at Vaught-Hemingway Stadium.

In what was nothing more than a scrimmage with the team split up into the Blue Team and Red Team, offense showed no signs of slowing down after its record-setting pace in 2020 while the defense showed signs of improvement.

Matt Corral had a solid day, playing only the first two quarters before letting Kinkead Dent and Luke Altymer handle the second half. Corral finished with 208 yards and two touchdown passes, completing 12 of 19 pass attempts.

Corral’s receiver of choice on Saturday was senior Braylon Sanders, who had four catches for 135 yards and a touchdown. After injuring his ankle against LSU in last year’s regular season finale, Sanders returned to the field this spring.

Dent an Altymer combined for 43 passing yards and a touchdown. Altmyer threw the touchdown for the Red team in the final minutes of the game. With John Rhys Plumlee watching on from the sidelines after the conclusion of the Ole Miss baseball team’s dramatic walk-off win over LSU earlier in the day, it was hard to find reason to put Dent or Altmyer ahead of him on the depth chart as spring practices end.

With Jerrion Ealy and Snoop Connor sitting out of Saturday’s scrimmage it allowed for other runner backs to have their chance to make an impression entering the summer offseason. Jakwaize Walker shined as the starter for the Blue Team, rushing for 75 yards and two touchdowns on 11 carries.

“They didn’t have the top guys when they were in there, which obviously as you can see makes a difference for anybody,” said Ole Miss head coach Lane Kiffin. “We’ll watch the film on that. They made a few plays in there and at times had some plays made where some receivers could have made plays that would have helped, statistically.”

The side of the ball that had the most scrutiny heading into spring was the defense. Coming off the 2020 season where they were the worst defensive unit in the Southeastern Conference and one of the worst in the country, the Rebel defense needed to show signs of improvement this spring.

While an intrasquad scrimmage does not provide a full picture of how much improvement the defense made, there were positive spots.

Highly touted freshman Tysheem Johnson picked off Dent for one interception and also had two tackles. Jon Haynes and Deantre Prince also had an interceptions for the Blue squad.

“It’s kind of a weird game, too, because things are mixed,” Kiffin said. “It’s kind of hard to evaluate that way. Those top receivers, you really weren’t supposed to tackle them so that probably made it a little harder to tackle them. I think spring as a whole, we’re much improved on defense.”