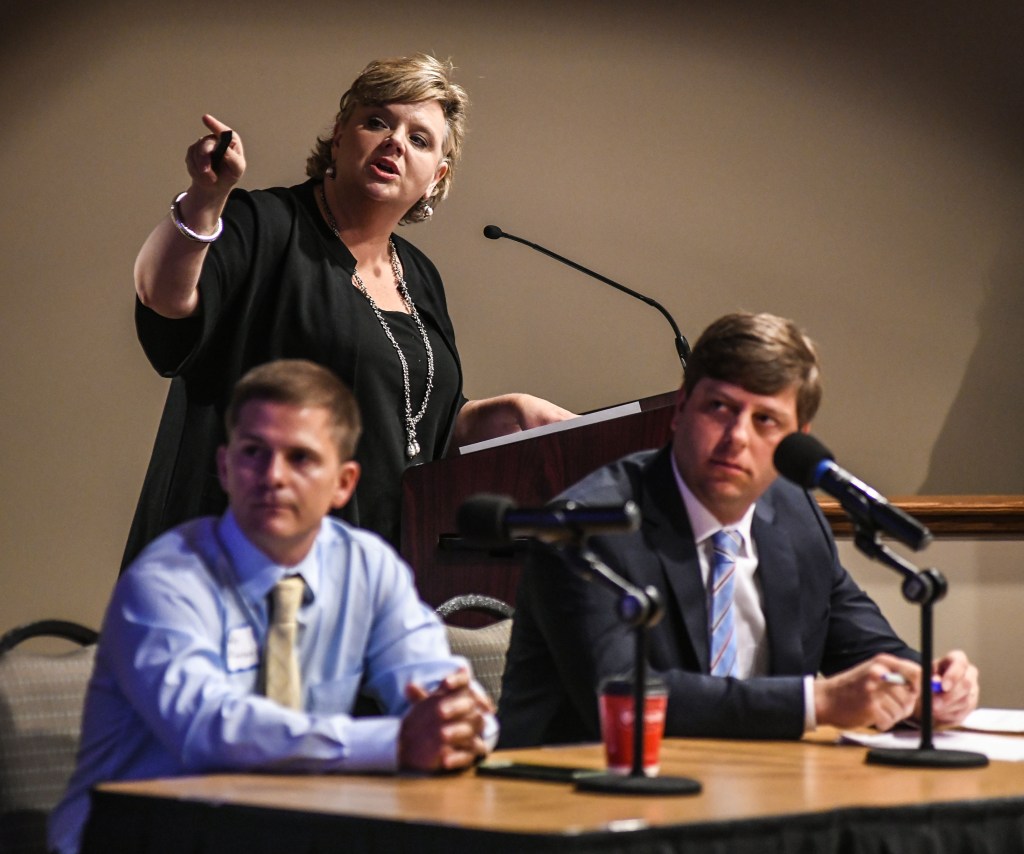 Editor’s note: This is the first in a series of stories about topics discussed at the Eggs and Issues event, including tourism, infrastructure and economic recovery.

Elected officials representing Lafayette County in the Mississippi State Legislature met with some of their constituents in person on Friday for the first time since the COVID-19 pandemic began.

The Oxford-Lafayette County Chamber of Commerce hosted its annual Eggs and Issues event at the Oxford Conference Center. The event is a legislative breakfast, where Mississippi senators and representatives of Lafayette County speak on the work being done in Jackson as well as take questions.

Eggs and Issues usually takes place every year before the new legislative session begins at the Mississippi State Capital, but due to the pandemic, it was delayed and held this week.

Many issues were mentioned and discussed, including updates on Lafayette County’s key infrastructure projects. One issue that received some attention was Williamson’s vote to deny the Town of Sardis’ application to renew their tourism tax.

Losing the tourism tax application, which allows Sardis to levy a three-percent tax on hotel occupancy and restaurant sales, will cost the town roughly $150,000 a year.

When news of the application’s denial was reported, Williamson, who represents territory in Panola and Lafayette Counties, issued a statement regarding his decision to vote no. The Panolian reported last month that, despite the Legislature voting in support of renewing the application, a law attached to the provision of local public and private legislation mandates the state representative covering that county vote for the matter.

With Williamson’s no-vote, it killed the application.

During Friday’s event, Williamson spoke again of his vote – and of the mixed reaction he has received from his constituents.

“It was supposed to have an audit when it came to me. It didn’t have an audit,” Williamson said of the application. “They gave me a list of transactions that they wanted to disclose to me, many of which were borderline abuses and waste and not really any accountability. So, I killed the tax. There was a lot of push back for it, rightly so.”

The Panolian’s report also stated the City of Batesville receives $1.5 million annually from their tourism tax, which would no longer come to the city if its application for renewal was ever denied.

For the City of Oxford, the loss of income would be much larger if it lost its tourism tax. With the University of Mississippi, Ole Miss sporting events, the Downtown Square, Double Decker Arts Festival and other events that draw large crowds, the city relies upon its tourism tax.

During the Board of Aldermen’s April 20 meeting, Mayor Robyn Tannehill revealed the city’s sales tax collection for the month of February. Oxford’s tourism tax was up 64 percent from January, with $24,415.31 in hotel and motel occupancy, despite the ongoing pandemic.

While Williamson has not publicly stated any intent to vote against renewing Oxford or Batesville’s tourism taxes, some in attendance at the breakfast expressed their concern.

During the question-and-answer portion of Friday’s event, Visit Oxford executive director Kinney Ferris asked Williamson about his vote and if he would bring back Sardis’ tourism tax if an audit was implemented.

“I’ve sat down with (Sardis Mayor Lula Palmer), and I’ve sat down with a couple restaurant owners that do have some interest in this,” Williamson said. “I’ve let them know that as soon as we reduce, or study, another tax in another area and it results in some sort of reduction, possibly the income tax removal, (the tourism tax) will absolutely be back on the table.”

Williamson also spoke on his endorsement of removing Mississippi’s state income tax. The Mississippi House of Representatives passed such a bill, but the Mississippi Senate did not before it ended its latest session.