No. 19 Ole Miss strikes early to take series opener against No. 13 South Carolina 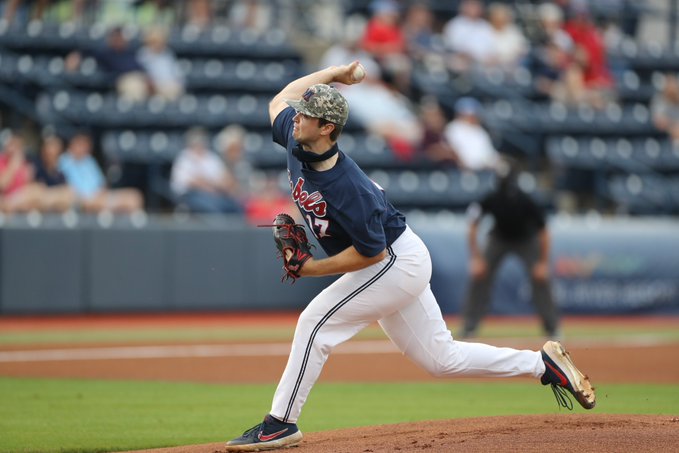 Gunnar Hoglund returning to the mound was exactly what Ole Miss needed.

The No. 19 Rebels picked up their second straight Southeastern Conference win with a 5-1 victory over No. 13 South Carolina at Oxford-University Stadium on Friday.

Hoglund missed his scheduled start in last weekend’s series against LSU due to feeling soreness in his bicep following his start in Starkville against Mississippi State earlier this month.

The junior returned to the mound on Friday and was dominant against the Gamecocks (26-13, 11-8 SEC), pitching six one-hit innings of shutout baseball. Hoglund did not walk a batter and struck out nine.

He was not on a pitch count, but Hoglund was pulled after six innings having thrown less than 80 pitches.

“I felt good out there,” Hoglund said. “I kind of got tired at the end out there, but other than that I felt good. We were kind of just feeling it out.”

Making his second start out of the bullpen, Derek Diamond worked two innings of relief. The former Sunday starter gave up a solo home run to lead off the seventh inning, but recovered by getting six strikeouts. Closer Taylor Broadway worked the ninth inning to secure the win for the Rebels (29-12, 11-8).

Coming off the nine runs the Rebels scored the final two innings of last Saturday’s comeback win over the Tigers, they scored two runs in the first inning of Friday then scored three more runs in the fourth inning.

Justin Bench produced a 2-RBI single in the fourth inning after catcher Hayden Dunhurst was intentionally walked to load the bases with two outs. Bench went 1-for-4 on the night while centerfielder TJ McCants went 2-for-3 with an RBI.

Last Saturday’s hero, Kemp Alderman, got the start as the designated hitter but struggled at the plate. He finished 0-for-4 with four strikeouts.

“I thought we played really well,” said Ole Miss head coach Mike Bianco. “One of the things is we just haven’t been really good three games in a row, or at least two of the three. We always seem to play really good in one of the games. It’s been a while since we’ve won on Friday, which is a shame because we’ve got one of the pitchers in the country throwing on Fridays.”

The Rebels will go for their first series win since sweeping Alabama on March 27 on Saturday. The series will conclude on Saturday with a doubleheader due to rain in the forecast for Sunday. The first game will start at 1:30 p.m. CT followed by the second game starting at 6 p.m. CT or 50 minutes after the conclusion of game one.