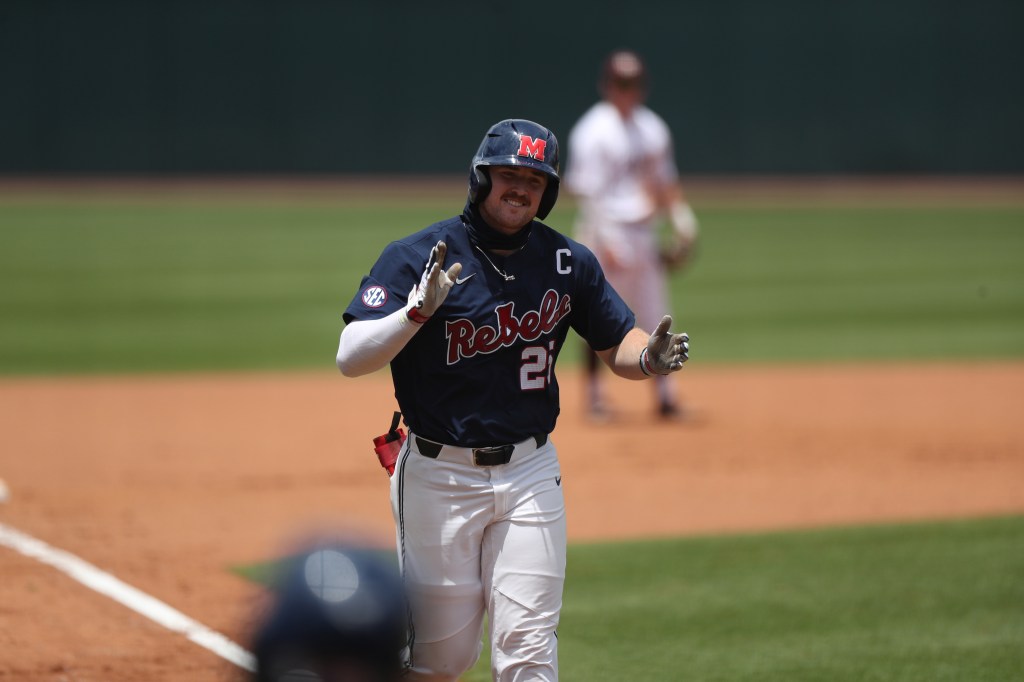 Ole Miss senior Tim Elko celebrates after hitting a three-run home run in the seventh inning against Texas A&M at Blue Bell Park on Saturday, May 8, 2021. The home run was Elko’s first hit since returning to the lineup after suffering a torn ACL on April 5. The Rebels won 12-7. (Ole Miss Athletics)

No. 12 Ole Miss got back on track on Saturday after having their five-game winning streak snapped on Friday, but there was a bigger story than the game’s result.

In his third at-bat since returning from a torn ACL on April 5, Tim Elko hit a three-run home run as part of a seven-run seventh inning in the Rebels 12-7 win over Texas A&M at Blue Bell Park in College Station, Texas.

Elko has been used in pinch-hit situations late in games since returning to the lineup against South Carolina on May 1. With a 0-1 count, the Ole Miss captain hit it about seven rows deep into the bleachers behind the right field wall for his ninth home run of the season and 39 runs batted in.

“It was an awesome moment,” Elko said of the the home run and celebration after. “I almost blacked out a little bit once I hit it and was running the bases. I was happy I was able to put some more runs on the board and help get us a win. …From the moment the doctors were talking to me and saying there was a chance I could come back and play, kind of from that moment I always had belief I’m going to do everything in my power to get back and do everything I can to help us keep winning games.”

With Friday starter Gunnar Hoglund leaving the game after 18 pitches due to what was described as forearm stiffness the night prior, Doug Nikhazy was looking to provide a solid outing on Saturday.

The first three innings were a struggle for Nikhazy, who had trouble with command on his off-speed pitches and gave up two runs before settling in. He went 6.2 innings, giving up four runs off five hits while striking out nine batters and walking three more.

Nikhazy put up three scoreless innings after the third inning, allowing for his teammates to respond at the plate and eventually take the lead for good.

Texas A&M starter Chris Weber kept the Rebel bats off balance the first four innings, producing a lot of ground balls and pop-ups for quick innings. Ole Miss got to Weber in the fifth inning with two runs to tie the game.

The seventh inning is where things came unraveled for the Aggies (26-23, 6-17) as the Rebels bats came alive with seven runs off seven hits, including Elko’s home run. Extending their lead to 10 runs late in the game allowed for head coach Mike Bianco to not have to go to closer Taylor Broadway, who has not pitched yet in the series.

“We looked uncomfortable the first three innings and then we were able to kind of chip away a little bit,” Bianco said. “It goes unnoticed, maybe because we do hit homers. We walk, we take pitches and make it hard on pitching staffs and our guys did another terrific job today.?

Saturday’s win was Bianco’s 900th career win as a coach and 800th win at Ole Miss.

The Rebels and Aggies will meet on Sunday in the rubber match with a first pitch scheduled for 1 p.m. CT. The game will be broadcast on ESPNU.