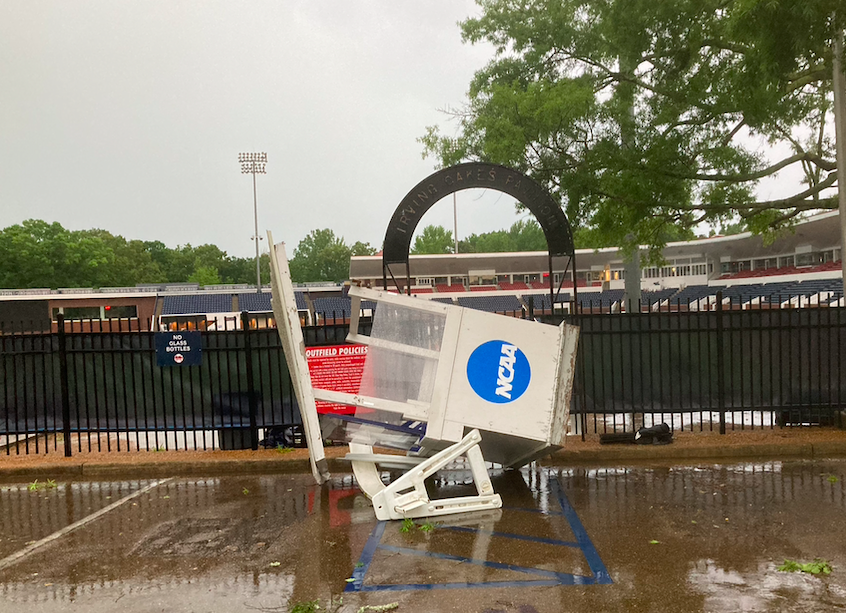 The ticket booth at Oxford-University Stadium’s left field entrance is blown down following a line of severe storms that moved through Oxford and Lafayette County on Sunday. A tornado was reported around Highway 30 in the Philadelphia community but has not been confirmed as of Monday morning. (Bruce Newman)

Mother’s Day came to a rough end for some on Sunday, as a line of severe storms rolled through Oxford and the eastern portion of Lafayette County.

Around 7 p.m., storms moved into the area from the northwest, moving at roughly 40 miles per hour. Reports of power outages came in with over 2,300 outages being reported at one point by North East Mississippi Electric Power Association.

“There were reports of people spotting a funnel cloud (but) we cannot confirm seeing one,” read a statement from Major Alan Wilburn with the sheriff’s department. “There were reports that trees had (fallen) on three houses. We had approximately 49 road blockages.”

Lafayette County residents reported trees blocking roads all across the county following Sunday’s storm. Damage was reported at the University of Mississippi campus, with a tree down near the UM water treatment facility, and the ticket booth for Oxford-University Stadium’s left field entrance was blown down.

Trees were were also down inside Oxford’s city limits, with OPD posting images of officers helping clear roads by cutting tree limbs.

As of around 10:30 a.m. on Monday, Northeast Mississippi Electric Power Association reported 963 outages and Oxford Ultilities reported one outage.

“Lafayette County Deputies, Lafayette County Road Department and North East Power Association worked throughout the night to clear road ways and restore power,” Wilburn’s statement continued. “There are still some residents without power but power is being restored quickly.”

The National Weather Service has not provided an update or a report of Sunday’s possible tornado.