Leiter dominant as No. 2 Vanderbilt evens series with No. 18 Ole Miss 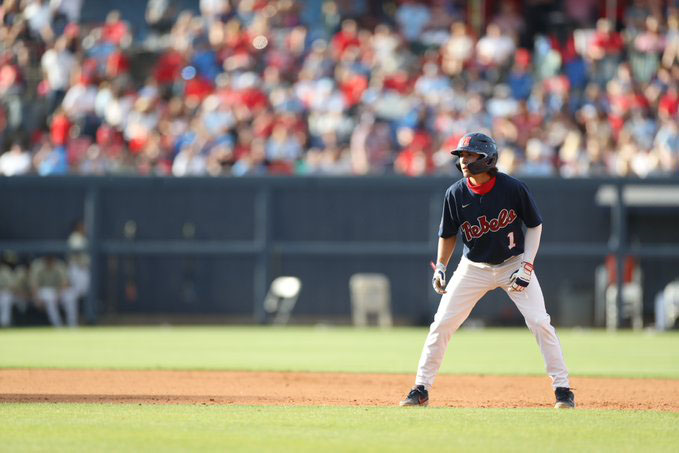 Ole Miss second baseman Peyton Chatagnier stands between second and third base during their game against Vanderbilt at Oxford-University Stadium on Saturday, May 15, 2021. (Petre Thomas/Ole Miss Athletics)

Jack Leiter returned to the mound after a week off and was nearly un-hittable.

No. 18 Ole Miss managed only two hits off Leiter as No. 2 Vanderbilt evened the weekend series with their 13-2 win at Oxford-University Stadium on Saturday.

The sophomore right-hander returned to formworked six innings, giving up a run off two hits while striking out 13 Rebel batters and walking three more. The Rebels (35-15, 15-11 Southeastern Conference) got the leadoff runner on base in the first two innings but could not take advantage as Leiter settled in.

Trailing 7-0 at the time, the Rebels managed to get Leiter in trouble for the first time all game after he loaded the bases with zero outs in the bottom of the sixth inning. Leiter responded by getting three strikeouts and a pop-up to limit the Rebels to only a run.

Jacob Gonzalez scored the Rebels lone run of the sixth inning when a ball got past Vanderbilt catcher CJ Rodriguez after a strike three was called on TJ McCants to extend the inning.

“Our guys just couldn’t pick up the breaking ball today,” said Ole Miss head coach Mike Bianco. “I thought early on we just chased breaking balls in the dirt and just couldn’t pick up the spin. Too many feeble at-bats. Too many weak at-bats early on. Those power guys, once they find their rhythm it’s tough to stop their momentum, but I thought early on we just didn’t have enough quality at-bats.”

Similar to what the Rebels did to Kumar Rocker in Friday’s series opener, Vanderbilt did to the entire Ole Miss pitching staff on Saturday. The Commodores (36-11, 17-8) hit seven home runs off 12 hits by six different players. Right fielder Isaiah Thomas hit two, giving him three home runs on the weekend.

Derek Diamond got the start on Saturday and gave up six runs off five hits while striking out seven and walking fore more Commodore batters.

“The ball was obviously really carrying today,” Bianco said. “Not a ton of wind, but warm and enough wind where it seemed every ball they barreled up got up in the air and got out of here. Not taking anything away from them, we just couldn’t do that.”

With the NCAA announcing Oxford as one of the 20 predetermined Regional sites for next month’s NCAA Tournament, which will be whittled down to 16 on May 30, the Rebels go into Sunday’s rubber match with a lot on the line beyond picking up just their fourth SEC series win of the season.

Ole Miss and Vanderbilt will conclude the series on Sunday with first pitch scheduled for 2 p.m. CT. The game will be broadcast on SEC Network.