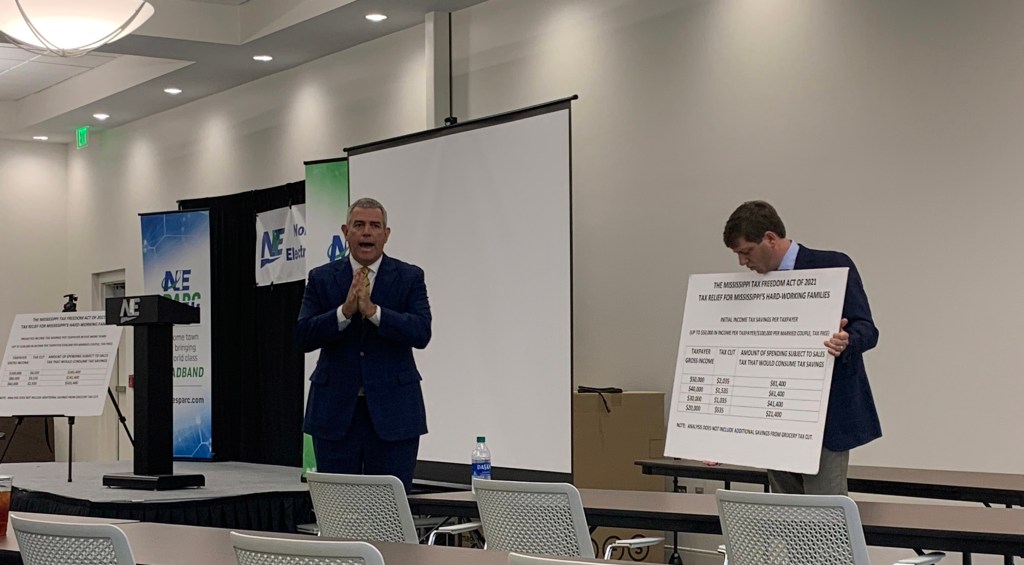 Mississippi Speaker of the House Philip Gunn, left, speaks at Northeast Mississippi Electric Power Association’s auditorium about his proposed removal of the state income tax with his Mississippi Tax Freedom Act of 2021. Representative Clay Deweese, right, holds up a display that includes information about the bill on Friday, May 14, 2021. (Jake Thompson/Oxford Eagle)

Mississippi Speaker of the House Philip Gunn is touring the state this summer to, as he put it, “convert” people towards his bill proposal to remove the state income tax.

Last Friday, the Speaker came to Oxford to discuss his proposal, which he calls The Mississippi Tax Freedom Act of 2021. The bill would repeal income tax for all Mississippians, and also cut the grocery tax in half from seven percent to 3.5 percent.

If the bill passes, it would create a $1.9 billion hole in the state’s revenue with $1.7 billion from the loss of an income tax and another $200 million lost from cutting the grocery tax in half.

During his visit with Oxford and Lafayette County elected officials, businesses owners and community leaders, Gunn spent over an hour selling his proposal and explaining how the Mississippi Legislature would replace the lost revenue.

“That’s a key factor of the plan. We want to make sure any revenue we lose is replaced,” Gunn told the EAGLE. “That’s a concern for many citizens. It differentiates this plan from the Kansas plan, which just eliminated income tax without any replacement revenue. Our is replaced through a combination of growth and a cap on spending and increasing the sales tax.”

In Gunn’s tax bill, the sales tax would increase 2.5 percent and an increase of 2.5 percent on vehicle purchases as well as an unknown increase in purchasing tobacco products.

Revenue from the first six months after the sales tax would be placed in what Gunn calls a budget stabilization fund. That would be about $500 million, which would be there to be drawn from if there is a revenue shortfall one year. There would also be triggers in place to keep the state from having a shortfall if the state does not have economic growth of 1.5 percent each year for a 12-year span.

The idea is to allow Mississippians to keep more of what they earn each year. Gunn stated during his speech that Lafayette County residents pay $40 million in income tax back to the state each year.

With the increase of the sales tax, it would allow the state to pull from those who are not residents of Mississippi but who frequent its cities and towns. For Oxford, which relies heavily on its tourism and out of town and state visitors, it would be one city benefits from the plan.

“It helps spread the tax burden among a broader class of people,” Gunn said. “Right now, those people who visit this town, and there’s a lot of them who visit Oxford, Mississippi, who don’t live here. They’re not residents. They don’t pay an income tax, but if you convert that to a sales then they’re helping contribute to the economy of our state.”

For smaller Mississippi towns where tourism is not a key factor of their budget and yearly revenue. Those towns rely more on their grocery stores, which serve more as a general store and provide all the resources in the town.

Cutting those town’s revenues in half with the grocery tax cut caused some concern during Gunn’s visit. The Speaker stated those towns would be covered in his plan and would remain whole.

“We want to make sure those towns are held harmless,” Gunn said. “So, we’ve increased the (tax) diversion to make sure that they do not lose any money.”

A similar bill was proposed in the Mississippi House of Representatives during the last session earlier this year, and was passed by the House with votes from both Republicans and Democrats. The bill died though as the Mississippi Senate did not bring it out of committee for a vote.

When the next legislative session begins in January, Gunn intends to introduce this bill and get it onto the Senate floor for a potential vote.