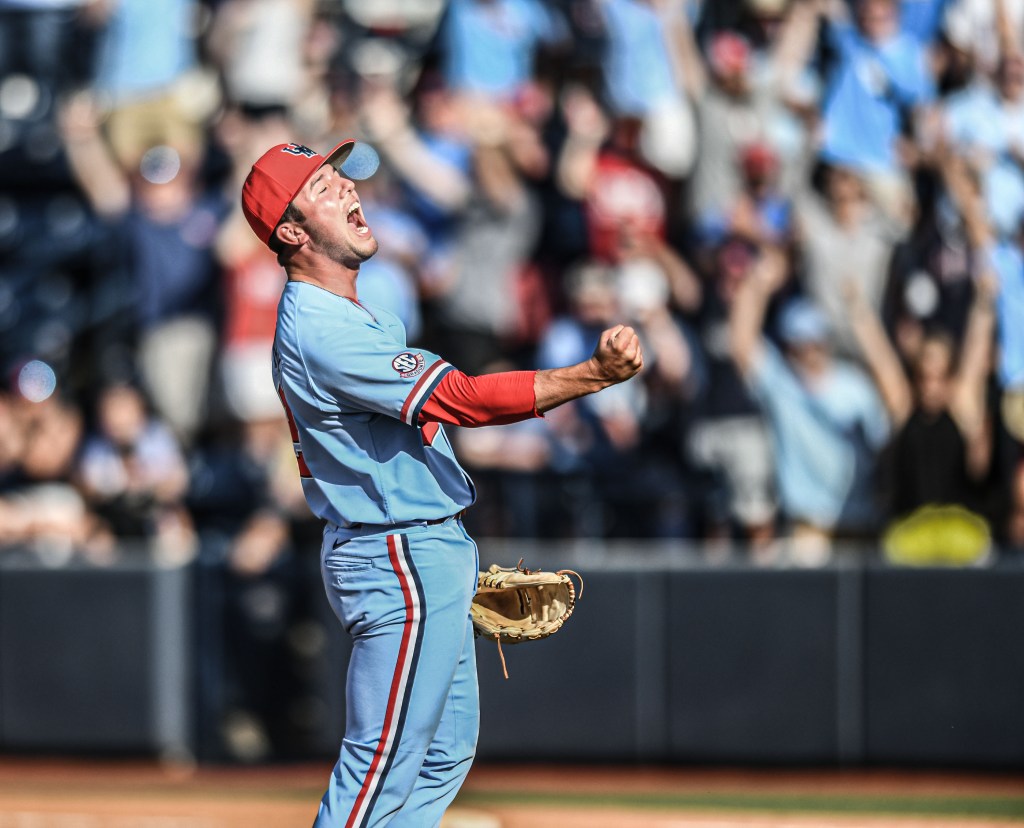 Ole Miss pitcher Taylor Broadway (27) celebrates the final out in a 13-10 win over Vanderbilt at Oxford-University Stadium in Oxford, Miss. on Sunday, May 16, 2021. (©Bruce Newman)

The No. 12 Ole Miss baseball team was on the outside looking in for a potential Regional hosting bid, but last weekend might have pulled them back in.

A series win over then No.2 Vanderbilt to close out the home portion of their Southeastern Conference slate was just what the Rebels needed to boost their resume that was in dire need of another strong series win.

Hours before the Rebels (36-15, 16-11 SEC) took on Vanderbilt in Friday’s series opener, the NCAA released its predetermined list of 20 host sites and Oxford found itself on the list. The list will be whittled down to 16 on May 30 at the conclusion of the conference tournaments.

Knowing they were in the conversation to host yet another Regional in the NCAA Tournament, the Rebels made sure they remained in the conversation come Sunday evening after securing the series with their 13-10 win over the Commodores in the rubber match.

“The coaches, I think we’re all aware and get it,” said Ole Miss head coach Mike Bianco on the importance of the series win. “We’ve done this long enough that we understand a series like this makes a big difference. But at the end of the day, you can’t just look at it. Must-win, I don’t use those phrases or terms. …It’s nice to have all these projections but at the end of the day you just have to win and take care of your business.”

Coming off the series win, the Rebels are sitting at No. 12 in the latest RPI rankings with 15 wins over the top-25 in the current RPI rankings. If the SEC Tournament in Hoover started today, the Rebels would be the No. 6 seed and playing Tuesday’s single elimination round. They are a game behind No. 10 Mississippi State and No. 9 Florida, both 17-10 in conference play, heading into the final weekend of the regular season. A series win over Georgia and some help from No. 1 Arkansas or Alabama could push the Rebels out of the first day of game and into the double-elimination format.

Ole Miss is rallying around key losses in Friday starter Gunnar Hoglund, who suffered a UCL tear, and Tim Elko, who suffered an ACL tear in April. Hoglund was shut down for the season last week after evaluating his injury following the Texas A&M series. Elko has returned to the lineup in a limited pinch-hit and designated hitter capacity.

“When you about leadership you think about the captain, but ours was one of those that went down,” Bianco said. “When he goes down and handles it so well and is a leader in a dugout wearing a brace around and fighting to come back, but they’ve all done that. From (Max) Cioffie to (Peyton) Chatagnier to Gunnar this week. I don’t think it’s a surprise to us. Obviously there’s weapons missing in the arsenal and we’d love to have those weapons. I don’t know if I’ve ever been more proud of a team. Just how resilient and relentless they are.”

Ole Miss travels to Athens to start their series with Georgia on Thursday.