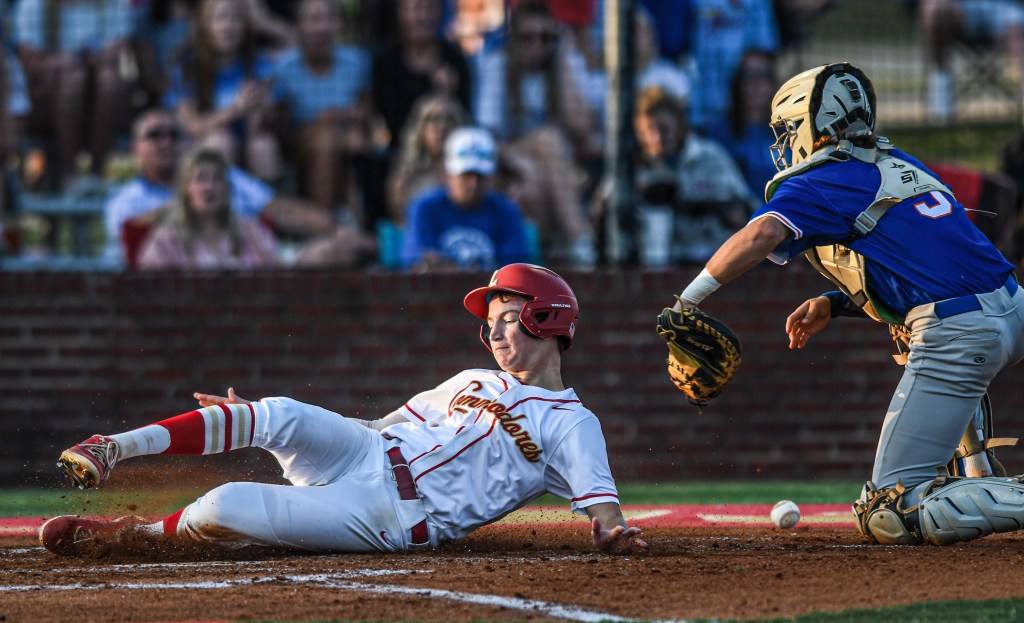 Lafayette High’s Everett Thompson scores as the ball gets away from Saltillo catcher Matthew Roncalli (9) in MHSAA Class 5A playoffs in Oxford, Miss. on Thursday, May 20, 2021. (©Bruce Newman)

The Lafayette baseball team found themselves on the brink of elimination for a second time this postseason on Thursday night.

Saltillo used an eight-run fifth inning to grab a commanding 1-0 lead over the Commodores in the MHSAA Class 5A North Half championship series after a 10-3 win at W.V. Brewer Field.

Mistakes in the field and and Lafayette pitcher Blake Loper having an off night on the mound also contributed to the Commodores being one loss away from their season ending.

“(It was a) very poor inning,” said Lafayette head coach John Walker of the top of the fifth inning. “We really didn’t do a whole lot right tonight and weren’t really competitive tonight … It wasn’t a great night for the Commodores tonight.”

That would be all the offense Lafayette would muster against Saltillo pitcher Ben Webb until Elijah Thompson scored a run in the bottom of the fifth. The Commodores had a chance to score more in response to Saltillo’s eight runs in the top of the frame, but only scored the lone run after loading the bases with two outs.

Lafayette batters struck out only three times, but had a lot of loud outs to the outfield or ground outs to the shortstop.

“We’re not a great offense by any stretch. We’ve been searching for an offense all year,” Walker said. “There are times we do things and can get going, but all told we’re not a great offense. So, if we get ourselves way behind it takes a lot for us to get back in a ballgame. Credit our guys, we had a chance right after (Saltillo) put up an eight spot and we loaded the bases. We’re confident in Wilson Varner in that spot to drive a gap and get three runs back, but that didn’t happen. That’s baseball.”

Coming off his complete-game against Ridgeland last week in the second round series, Loper struggled after the first couple of innings.

Saltillo loaded the bases twice in the fifth inning, with the aid of two Commodore errors, and Loper was taken out of the game after 4.2 innings. He finished the night with five strike outs but walked three batters and hit another.

“Sometimes it’s not there and he was competitive,” Walker said of Loper’s outing. “Wasn’t in the zone like we had been seeing the last few times out. Could be a little energy of the park. Could be a lot of things. It’s high school baseball. He competed and gave us a chance and the inning got away from us. We did some dumb stuff, defensively. We walked some guys and we had some hit batsmen and they barreled up some balls and it just got away from us.”

The series moves to Saltillo for game two on Friday at 7 p.m. Lafayette must win to force a deciding game three back home on Saturday at noon.