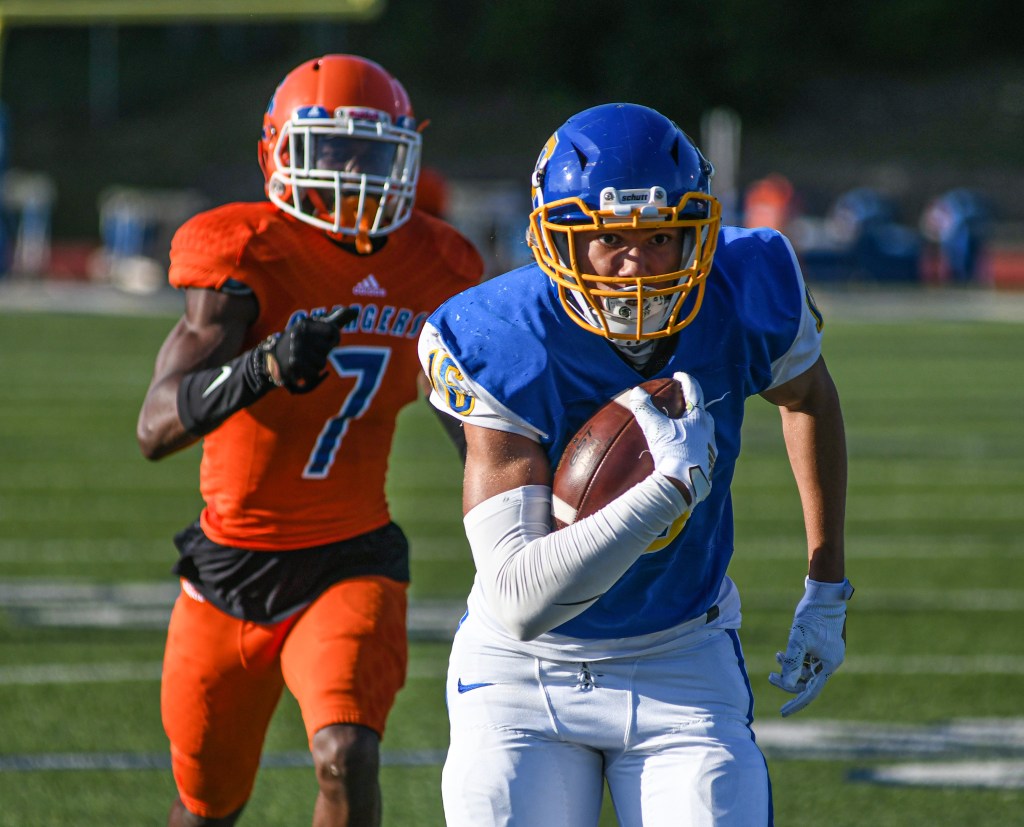 Oxford's Ashten Shorter scores on a 57-yard touchdown reception against Southaven in a spring football game at Bobby Holcomb Field on Thursday, May 20, 2021. The Chargers won 23-13. (©Bruce Newman)

Certain question marks may remain in particular areas for the 2021 Oxford Chargers, but head football coach Chris Cutcliffe saw some progress on that front after capping off spring football with a 23-13 spring game victory over Southaven on Thursday at Bobby Holcomb Field.

Some positions were set in stone earlier in the offseason while some were either won or lost after Thursday’s game. The Chargers on the other sideline proved to be an excellent first test at the end of the night.

“It was good to get back to normalcy with spring practice,” Cutcliffe said. “Southaven was a good team, great test. They’re always an extremely well coached team. They give you problems on both sides of the ball.”

Like the majority of last season, Michael Harvey and Trip Maxwell both shared reps behind center. Maxwell threw a touchdown pass on Oxford’s third offensive play, rolling out of the pocket and finding Ashten Shorter all alone for a 57-yard touchdown pass with 7:52 left in the opening quarter.

“We had a great spring at quarterback,” Cutcliffe said. “I was extremely pleased with their progress, the whole group, to be honest. We had a plan for them tonight to split reps. They got good work in.”

Shorter highlighted a receiver corps that lost 98 percent of their production last season due to graduation. Along side him, Cashe Shows, Jack Harper, and Calvin McGlown saw quality reps in that area.

“We definitely have in an inexperienced group there, but I think it’s guys that had great JV or freshman seasons last year,” Cutcliffe said. “They may not be battle tested yet, but I think 7-on-7 will be huge this summer because there are going to be competitive moments against some good teams this summer.”

The Chargers return three starters on the offensive line, but saw a handful few fresh faces in the lineup that was tested with heavy pressure brought about by Southaven.

The offensive line also paved the way for a pair of rushing touchdowns coming from Tracy Harris late in the fourth quarter and Malachi Mitchell in the JV portion which took the lead for good the rest of the way.

On defense, leading tackler from last year, Alex Sanford, made the switch from linebacker and played defensive end while a few new faces showed out at linebacker alongside Keegan Wilfawn. Malaki Pegues saw significant action playing on the edge while a pair of transfers, Martavis Blackmon and Ben Goubeaux made stops throughout the night.

“Alex (Sanford) is a talented player, a versatile player,” Cutcliffe said. “We had some guys really step up and do things where we can move Alex into different positions, which will make us better defensively. We did a good job of playing team defense. We always talk about that and everyone doing their job and their part. When guys buy into that mentality and there’s a lack of selfishness, you can be a good defensive football team.”

Goubeaux also saw action at punter while William Wilkinson handled the place kicking duties and connected on a 26-yard field goal to give Oxford scores on their first two possessions and a 10-0 lead at the conclusion of the first quarter.

“We have new faces everywhere with our specialists group. So we’re breaking in spots there,” Cutcliffe said. “I’m pleased with the progress though, it’s been fantastic throughout the spring. We’ve been putting in good fundamental work with our special teams. That obviously wasn’t a big part of this game because it wasn’t live. Logan Dodson had done a great job of creating a plan for it this spring.”

The Chargers begin summer workouts on June 1 before taking on Horn Lake in their fall jamboree a week before regular season play.