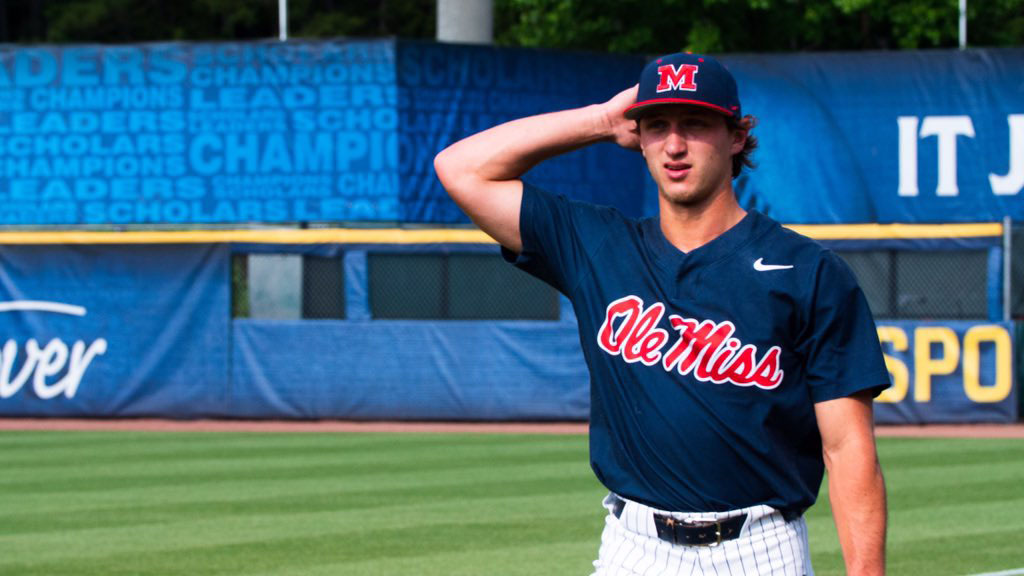 Ole Miss pitcher Doug Nikhazy takes in practice at the Hoover Metropolitan Stadium ahead of the SEC Baseball Tournament in Hoover, Ala. on Monday, May 24, 2021. Nikhazy earned First Team All-SEC honors on Monday. (Ole Miss Athletics)

As the Ole Miss baseball team begins their postseason journey this week, the Southeastern Conference honored several Rebels for their play during the regular season.

Tim Elko was named the Scholar-Athlete of the Year, becoming the first Ole Miss player to earn the SEC’s top individual academic honor. It is the first individual year-end honor an Ole Miss player has earned since Drew Pomeranz was named SEC Pitcher of the Year in 2010. Suffering an ACL tear on April 5, Elko returned less than a month later in a pinch-hitting and designated hitter role. He’s hit two home runs since returning to the lineup.

Nikhazy earned First Team All-SEC honors. He finished the regular season with an 8-2 record and a 2.12 ERA and is the first Rebel since Chris Ellis in 2014 to win seven SEC games in a single season. In his final regular season start last Friday, Nikhazy recorded a career-high 13 strikeouts against Georgia. Nikhazy also threw a complete game against Mississippi State on April 17, his first of his Rebel career.

Dunhurst and Bench both earned Second Team All-SEC honors. The Rebel catcher also landed on the Preseason All-SEC Second Team and Dunhurst is also a semifinalist for the Buster Posey Award. Dunhurst was also named to the All-Defense Team and All-Newcomer Team.

The All-Newcomer Team is special to this season for those who were freshman last year and did not get to compete in their first SEC season due to the COVID-19 pandemic, which caused the season to be canceled ahead of the opening weekend of conference play last year.

Gonzalez and McCants landed on the Freshman All-SEC Team and provided key sparks to the Rebel offense in their first seasons. The shortstop led Ole Miss with a .349 batting average in the regular season and Gonzalez has been the starting shortstop all season. McCants took over the center field position three weeks into the season and solidified himself as one of the conference’s best outfielders.

McCants led the Rebels and was tied for fifth in the SEC with a .351 batting average in conference play. He took over the leadoff spot late in the regular season.

The Rebels were voted to All-SEC teams seven times, tying the program record set in 2007. They have had a player selected to an All-SEC team every season of the Mike Bianco era.