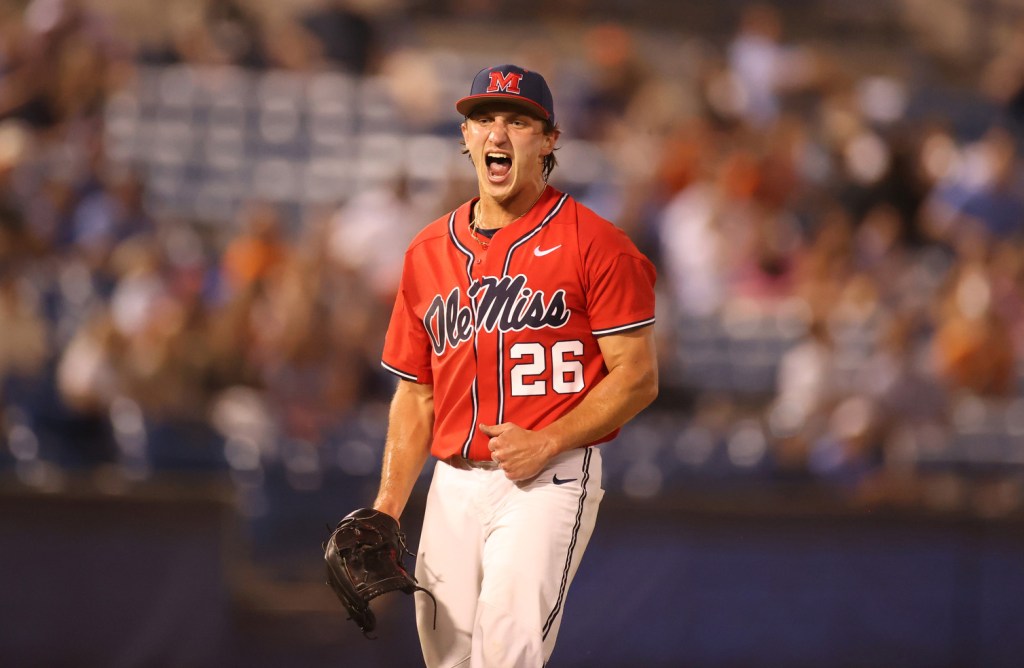 Ole Miss pitcher Doug Nikhazy celebrates during the game against Auburn in the first round of the Southeastern Conference Baseball Tournament on Tuesday, May 25, 2021. The Rebels won 7-4 to advance to Wednesday’s second round agaisnt Vanderbilt. (Josh McCoy/Ole Miss Athletics)

Doug Nikhazy was given one mission on Tuesday and he accomplished it.

The Ole Miss ace pitched six innings of two-run baseball on four days rest against Auburn in the first round of the SEC Baseball Tournament at the Hoover Metropolitan Stadium in Hoover, Ala. The Rebels rode their ace and timely offense for the 7-4 victory over the Tigers, advancing into the double elimination portion of the tournament.

With Tuesday’s victory the Rebels are ensured at least two more games, starting Wednesday night against Vanderbilt in a rematch of the 2019 championship game.

Nikhazy gave up two runs off four hits while striking out seven Auburn batters, four days after striking out a career-high 13 against Georgia last Thursday. After giving up a leadoff solo home run to Auburn’s Ryan Bliss, Nikhazy retired the next 14 batters faced before issuing his only walk of the night.

Ole Miss head coach Mike Bianco and Nikhazy spoke prior to Tuesday’s start and the Rebels top pitcher told his coach he wanted the ball. Tuesday would normally be a bullpen day for Nikhazy on a normal pitching schedule, which helped the decision to start him.

“I felt fantastic and I think the conversation me and Coach (Bianco) had were, I was going to go if I felt good and it was great situation where I came out and felt good every day this week. I really wanted the ball today and I was happy that Coach ‘B’ gave me the opportunity.”

The Ole Miss bats put up seven runs off 12 hits including two home runs, one being unique. In the bottom of the third inning, Justin Bench hit what seemed to be an inside-the-park home run after it bounced off the top of the left field wall, but upon review looked to hit the top of a fence bracket behind the wall as part of a four-run frame.

After Auburn got to within a run, catcher Hayden Dunhurst then provided a cushion for the Rebels with a two-run home run in the bottom of the seventh inning for the winning margin.

“I’m screaming at Bench to run and thankfully it really square and caroms over into foul territory and was able to get an easy in-the-parker,” Bianco said. “Dunhurst hit that home run, obviously, late and gives us a cushion, feeling a little bit better going into the last couple innings. Dunhurst swung it well at game three against Georgia as well. I think he’s back to his normal self. I think it’s big.”

Ole Miss will start Derek Diamond against Vanderbilt in Wednesday’s second round match up with a first pitch set for 8 p.m CT. The Rebels took two of three from the then-ranked No. 2 Commodores earlier this month, but Vanderbilt won the game Diamond pitched. The winner advances to the winner’s bracket on Thursday afternoon with the loser playing in an elimination game on Thursday morning.