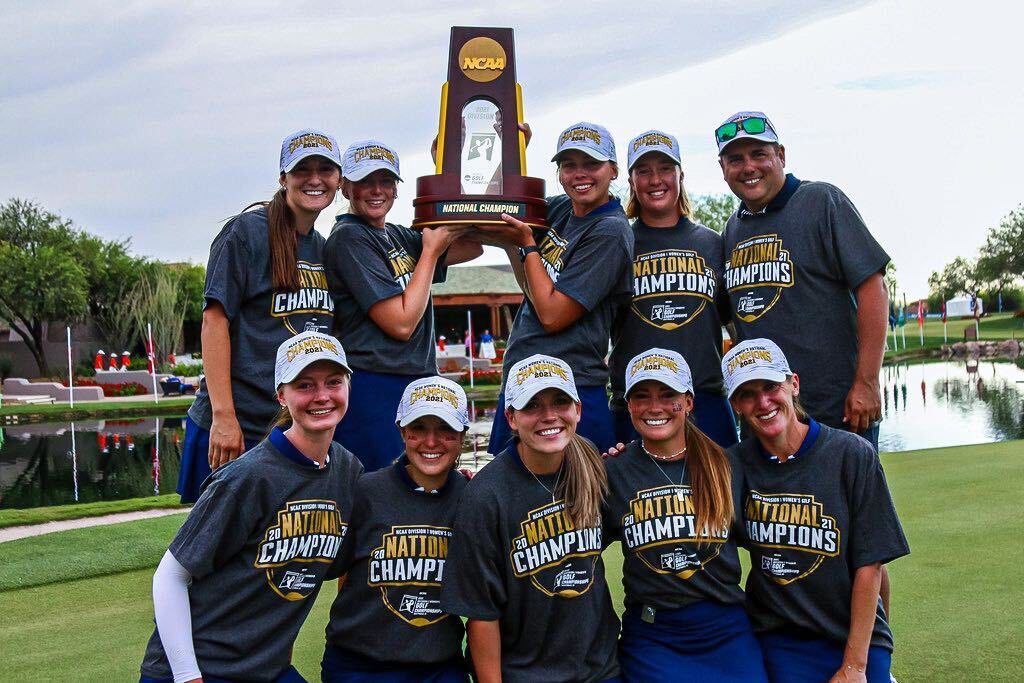 The Ole Miss women’s golf team holds the 2021 NCAA Division I National Championship trophy after defeating Oklahoma State in the finals at Grayhawk Golf Club in Scottsdale, Ariz on Wednesday, May 26, 2021. It is the first national championship for a women’s team sport in school history (John Mendoza)

The Ole Miss women’s golf team completed their history climb the top of the women’s collegiate golf mountain on Wednesday.

Sophomore Andrea Lignell made her par putt on the 17th green to win her match up 2 with a hole to play, clinching the championship point for the Rebels in the process. Ole Miss won the national title in dominant fashion, taking the first three points of the match.

The first point was secured when sophomore Chiara Tamburlini won her match 6 & 5. Senior Kennedy Swann picked up the second point for the Rebels with a 2 & 1 win. Senior and All-American Julia Johnson won her match 4 & 3 after the Rebels had secured the championship.

“It’s been a pretty intense two days we’ve had,” said Ole Miss head coach Kory Henkes. “Very little sleep and lots of stress. Just incredibly proud of our team and coaches. …It’s truly incredible to be the first to accomplish this for Ole Miss.”

Sophomore Smilla Sonderby lost her match 4 & 3, but was the key reason Ole Miss was playing for a national championship. The two-day match play format started on Tuesday with No. 4 seed Ole Miss defeating Texas 3-2 in the quarterfinals on Tuesday. Sonderby clinched the winning point to advance after winning her match on the third playoff hole.

After hitting her approach shot on 18 in the water, Sonderby hit her next shot within four feet to par the par-5 hole to keep her match against Texas’ Ashley Park alive. Sonderby was a replacement for Ellen Hume, who did not compete in the match play portion of the championship due to an injury.

“For (Sonderby), as a fifth man, to do what she did in stroke play is unbelievable and then for her to go to the (quarterfinals) is unbelievable again,” Johnson said. “Just what she did this week was really special and I think it was good for her. She’s only been here a semester, so for her to solidify herself and her name on this team, that was just really special.”

Henkes brings Ole Miss its first NCAA national title after completely rebuilding the women’s golf program since taking it over in 2015.

During her time as head coach, Henkes has led Ole Miss to a Southeastern Conference Tournament championship in 2019 and three NCAA Tournament appearances.

“We were ranked 134th when I took over the position at Ole Miss and I saw it as an opportunity with great facilities and the right people in place that we could really do something special here at Ole Miss and that’s what we’ve done,” Henkes said. “I’ve just tried to chip away at it every year. Just try to bring players here to Ole Miss who wanted to be a part of something special and help us achieve all of our goals. I think that was the thing. Lets just get a little bit better, a little bit better until we can reach our goals.”