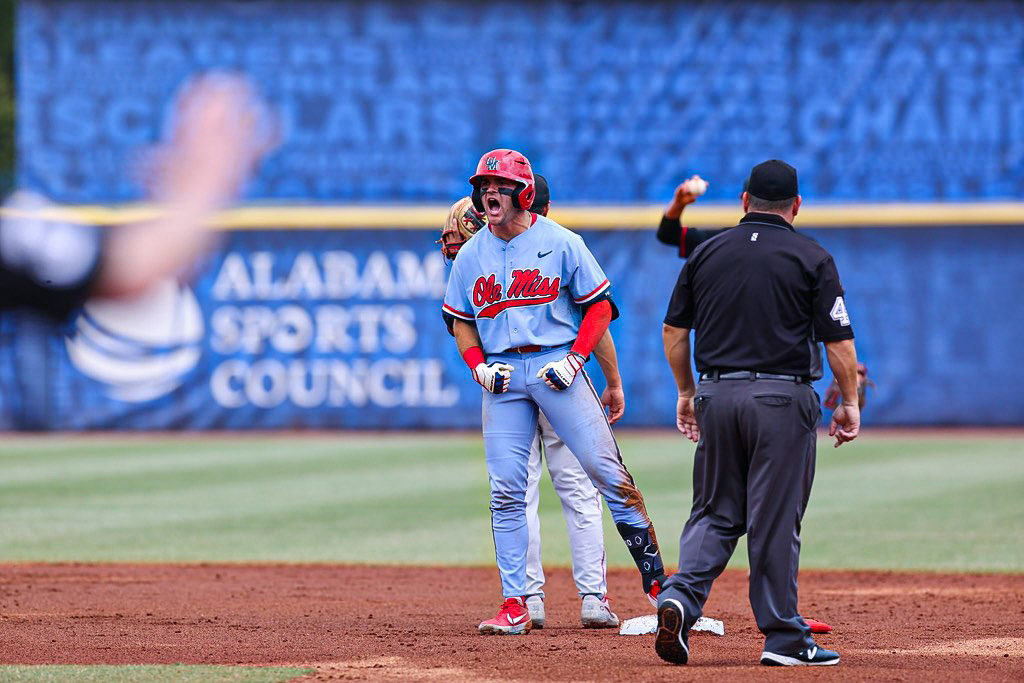 Ole Miss outfielder John Rhys Plumlee stands on second base after a hit against Georgia during their elmination game in the SEC Baseball Tournament at the Hoover Metropolitan Stadium in Hoover, Ala. on Thursday, May 27, 2021. (Josh McCoy/Ole Miss Athletics)

The Ole Miss baseball team knew they needed to hang around Hoover, Ala. for a few days this week to feel better about hosting another Regional next week in the NCAA Baseball Tournament.

The Rebels should be breathing a sigh of relief as a deep run in the SEC Tournament has all but locked down a chance for them to play at least two more games inside Oxford-University Stadium this season.

With wins over Auburn in Tuesday’s single elimination round and Georgia in Thursday’s do-or-die elimination game in the third round, the Rebels put themselves in position to make the weekend with another elimination game against Vanderbilt on Friday.

The Commodores defeated the Rebels 5-4 in walk-off fashion in Wednesday’s second round game, making it 2-2 between the two teams in the season series. After suffering their first loss of the tournament around midnight Thursday morning, Ole Miss turned around and then defeated the Bulldogs in the same day in a 4-0 win.

“I’m proud of the way our guys showed up today after a tough loss last night, getting back to the hotel late, but you’ve got to do it in this tournament, said Ole Miss head coach Mike Bianco after the win over Georgia. “That was the message to the team (Thursday morning).”

Thursday’s win kept the Rebels’ alive in the SEC Tournament, but also kept them alive to potentially navigate their way back to a top-8 national seed in the NCAA Tournament. In both D1Baseball and Baseball America’s latest projections for the Field of 64, the Rebels are the No. 12 National Seed and paired with No. 5 National Seed Tennessee and the Knoxville Regional in D1Baseball’s projections and paired with No. 5 National Seed Notre Dame and the South Bend Regional in Baseball America’s.

Making it to Friday means the Rebels need to win-out to make it to Sunday’s championship game. Doing so could bolster their resume, but depending on how the selection committee views things, the Rebels may not have to make a week-long run in Hoover.

Mississippi State went 0-2 in the Tournament as the No. 2 seed, getting mercy-ruled by Florida and Tennessee in back-to-back days. With a win over Vanderbilt in Friday’s game, the No. 12 Rebels (40-18) would have three victories over the No. 3 team in the country and a chance to get a second win over No. 1 Arkansas in Saturday’s semifinal game. A championship game match up with either No. 4 Tennessee or No. 13 Florida would await the Rebels on Sunday.

Check oxfordeagle.com for a recap of Friday’s game and the rest of the Rebels potential games in Hoover this weekend in the SEC Tournament.