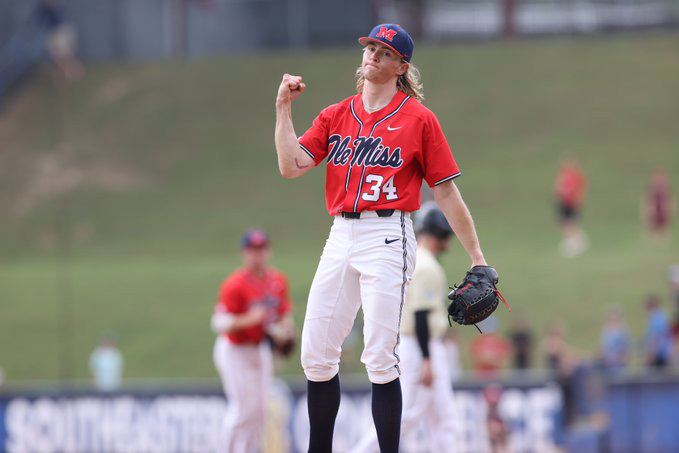 Ole Miss pitcher Tyler Myers reacts during their elimination game against Vanderbilt in the SEC Baseball Tournament at Hoover Metropolitan Stadium in Hoover, Ala. on Friday, May 28, 2021. The Rebels won 4-1 to advance to Saturday’s semifinals. (Josh McCoy/Ole Miss Athletics)

The Tyler Myers comeback story added another chapter on Friday.

Myers pitched seven-plus shutout innings as Ole Miss defeated Vanderbilt 4-1 in an elimination game at the Hoover Metropolitan Stadium in Hoover, Ala. The win sends the Rebels (41-18, 21-13 Southeastern Conference) to the semifinal round of the SEC Tournament for a third straight time.

In what was Myers longest out of his first season back since undergoing Tommy John Surgery, he set a new career mark innings pitched and in strikeouts with six. Myers issued only one walk, which was to the final batter he faced in the bottom of the eighth inning.

“Words can’t describe. I’m so excited. So happy,” Myers said. “Just inning by inning. Pitch by pitch. I was just having the mentality to go out there and compete one pitch at a time and be strong. See where it takes me.”

Myers was backed up by one of the Rebels better defensive performances of the season. After Myers came out of the game, Vanderbilt loaded the bases with no outs as Brandon Johnson took the mound. Johnson managed to induce a double play, including a strong throw by Peyton Chatagnier, and then get a ground ball to end the inning and give up only a run.

Getting the start for Vanderbilt was Jack Leiter. The Rebels managed to run Leiter out of the game after 6.2 innings and ran his pitch count up early.

Ole Miss got the scoring started in the top of the second inning when Chatagnier drew a walk to score a run following by a sacrifice-fly by Calvin Harris to score Elko from third for the early 2-0 lead.

TJ McCants hit a RBI-single in the seventh and Kevin Graham hit a solo home run over right center field in the eighth inning to go up 4-0 at the time.

At the start of the day, Ole Miss was projected by both D1Baseball and Baseball America as the No. 12 National Seed in next week’s NCAA Baseball Tournament. With a game against No. 1 Arkansas on Saturday and potential a game against either No. 4 Tennessee and No. 13 Florida on Sunday, the Rebels have a chance to possibly insert themselves into the top-8 National Seed conversation.

“Not at all,” Ole Miss head coach Mike Bianco said when asked if that has been discussed with the team. “It’s not worth the energy. It’s not worth the distraction. We realized that that’s part of it. I think, especially as coaches, we realize that the better that you play here, the longer that you stay here, obviously your RPI goes up because you’re playing great teams with great records and RPIs. It is your resume. The committee gets to watch you play against the best teams in the country. But, no. I think it’s just wasted energy to focus anything on that. That’s up to 10 members in Indianapolis.”

Ole Miss and Arkansas will play in the second semifinal game of the day on Saturday at approximately 3:30 p.m. CT. The game will air on SEC Network.