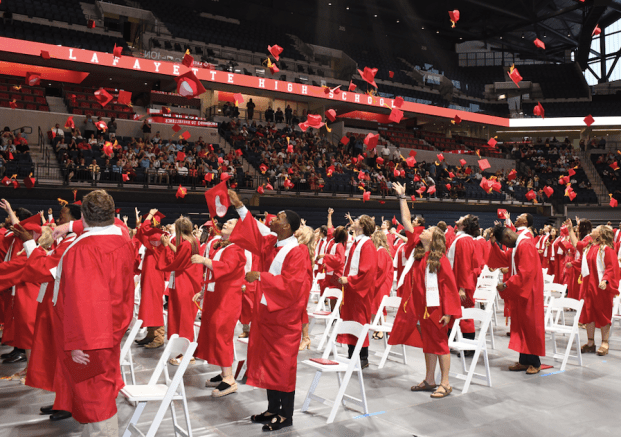 Lafayette High School’s Class of 2021 tosses their caps into the air at the conclusion of the Commencement ceremony inside The Pavilion on Thursday, May 27, 2021. (Joey Brent)

‘They represent a comeback for all of us:’ 2021 Lafayette High School Graduation

For the first time in two years, Lafayette High School held an in-person graduation ceremony on Thursday and took the time to look back at the year that was and focus on the future of the Class of 2021.

The ceremony took place at The Pavilion on the University of Mississippi Campus and was the first time all graduating seniors where in the same building at the same time since March 2020. Students had the option of returning for in-person learning or virtual learning during the 2020-21 school year.

Lafayette High School principal Glenn Kitchens focused on what the night meant for the graduates and all of those in attendance during his welcome speech.

“They represent a comeback for all of us,” Kitchens said of his graduates. “Enduring well over a year of their high school career navigating the stormy waters of a worldwide pandemic. They have been resilient. There was never any doubt that they would succeed.”

Kitchens acknowledged the seniors who have received awards and scholarships to help them in their collegiate careers. More than $1.4 million in scholarships have been awarded to Lafayette’s Class of 2021, according to Kitchens.

Valedictorian Leigh Kergosien and Salutatorian Emalee West were acknowledged and spoke to their fellow classmates during the ceremony.

Kergosien spoke about her time returning to Mississippi after living in other states and other parts of the world as the daughter of a soldier. She also provided words of advice to her classmates as they embarked on life after Lafayette High School.

“When my sisters and I arrived five years ago from an all-girls international school in Sydney, Australia, Lafayette and even Mississippi seemed like a foreign country to us even though it’s my family’s native state,” Kergosien said. “As I got to know Lafayette, what I found was a school body that accepts one another regardless of their differences. There’s a real sense of fellowship among the students and the staff and faculty that show love and genuine concern and have a vested in each of us.”

During the ceremony, Caitlyn Rhea was given the Commodore Award and the senior members of the LHS Choir sang the class song “Where do I Begin.”

Teachers and other Oxford School District employees on the certified pay scale will see a bump to their pay starting... read more