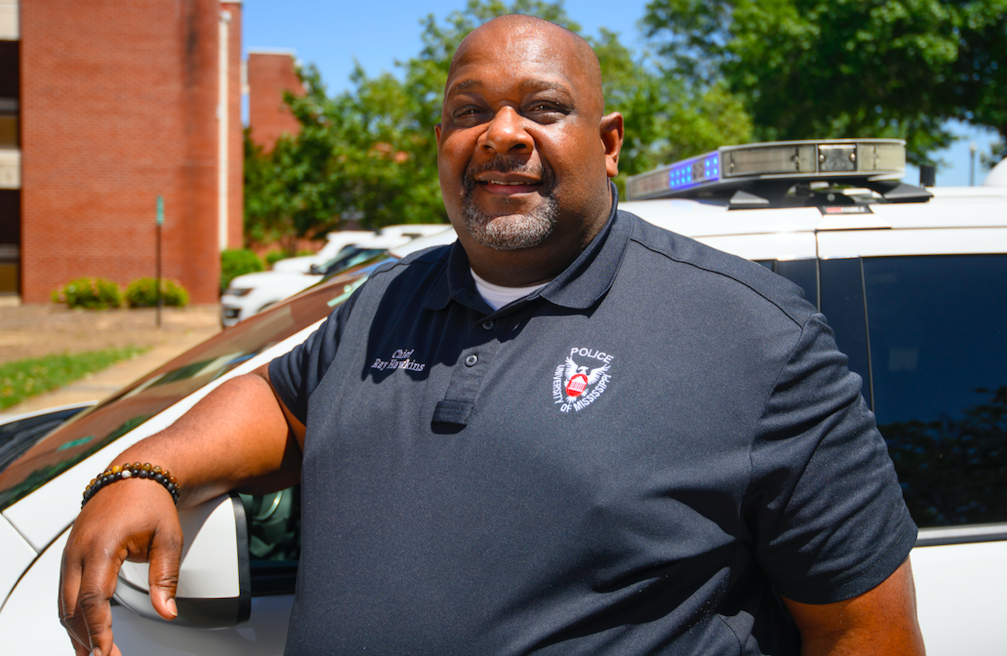 University of Mississippi Police Chief Ray Hawkins retires June 30. Hawkins has been with UPD for 24 years, rising through the ranks after initially arriving as a patrolman who wanted to finish his degree at the university while working. (Photo by Thomas Graning/Ole Miss Digital Imaging Services)

University of Mississippi Police Chief Ray Hawkins, respected law enforcement officer, natural leader and a believer in the ‘education before enforcement’ approach to policing, is retiring after a stellar 30-year career.

Hawkins, who was hired as UPD chief on March 30, 2018, retires June 30. He’s looking forward to spending more time with friends and family. He’s been with UPD for 24 years, after initially arriving as a patrolman who wanted to finish his degree at the university while working.

He quickly found that Ole Miss felt like home and has enjoyed all the collaboration that comes with working on a college campus.

“It’s the university environment that I’ll miss – the partnerships you create from one department to the other, the willingness to engage with others not only for success of the university, but for each person’s individual success as well,” Hawkins said. “We depend on each other to make things happen.

“What I will always love is that once you become a part of this community, people really step up to help you make your job easier.”

When Hawkins took over UPD, he talked about how he enjoyed working on a college campus. The student-focused approach to policing also has been a hallmark of his time as chief.

“Working with students is probably the most gratifying part of the job,” Hawkins said. “Getting to know them. Every time you interface with them, you have a conversation that is worthwhile because of the things they share with you: their goals and aspirations, or their family life.

“Anytime you can give them some guidance along their way to make the path a little easier for them is rewarding.”

The story of the Hawkins family at UM begins when Chief Hawkins’ father was working in construction on campus during the time of the deadly riots surrounding the enrollment of James Meredith, the university’s first Black student, in 1962. The elder Hawkins, who was shaped by being witness to that event, always valued education.

This no doubt played a role in Hawkins and his three siblings attending Ole Miss, the UPD chief said.

His sister, Patricia Reed, holds an elementary education degree from the university. His brother Perry Hawkins holds a chemical engineering degree from Ole Miss, and brother John Hawkins was a banking and finance major and was elected the university’s first Black cheerleader in 1982, and is noted for his refusal to carry the Confederate battle flag at games.

“There was a legacy already prior to me being here,” Hawkins said. “I was already very familiar with the campus, and I knew it was a good opportunity for me to continue my education.”

The Hawkins legacy continues on campus. The chief’s daughter, Ta’Nia Hawkins, of Water Valley, is an Ole Miss junior majoring in allied health/pre-dentistry.

Hawkins joined UPD as a patrolman in 1996, after having worked at the Water Valley Police Department for five years. His faithful service and proven leadership ability led to several promotions, including field training officer, police lieutenant, acting captain of investigation and detective lieutenant.

He was named associate director (assistant chief) to Chief Jeffery Van Slyke and held that position under Chief Calvin Sellers and Chief Tim Potts. He was named chief of police after Potts relocated to be closer to family

He said his officers have helped make many of those goals a reality and also have performed very well each day. He’s proud of them. He believes they have been successful because of their approach.

“Some police departments are reactive in that they tend to just wait for the crime to be committed and they respond,” Hawkins said. “We don’t do that here. We really engage our community and try to become a part of our community.

“UPD has a philosophy of ‘education before enforcement.’ This philosophy helps officers understand in an educational environment the importance of educating the community should be a priority. It helps build strong partnerships with those we serve.”

Charlotte Fant Pegues, interim vice chancellor for student affairs, said she wishes the best for Hawkins, with whom she has worked closely over the years.

“Chief Hawkins has been a trusted leader and friend to many throughout his law enforcement career at the university,” she said. “His unwavering commitment and decades of experience will be greatly missed. I wish him the very best in his retirement.”

Hawkins has been a great mentor and Brown credits him with being a major factor in his own success.

“Chief Hawkins has taught me a lot about law enforcement and, more importantly, about myself,” Brown said. “He is a demanding leader but has always been fair and will fight for you to the end, caring about you not just as an employee but as a person.

“Chief Hawkins always challenges you and keeps you on your toes, never allowing you to be comfortable with the status quo.”

The chief agrees that the environment at UM has always been to tackle adversity and try to meet challenges head-on for the good of the community. He has enjoyed that part of working here, he said.

“I just can’t remember a single time in my 24 years of ever having been in a situation where, when it was all over, I walked away upset or dissatisfied with something,” Hawkins said. “Everyone is willing to hear you out, and to engage with you and to help you come up with a solution when problems arise.

“That’s one of the most rewarding things about working here. Everyone really is pulling toward the same objective. We always pooled our resources for the good of the university. I always go back to that. It’s been very satisfying to me.”