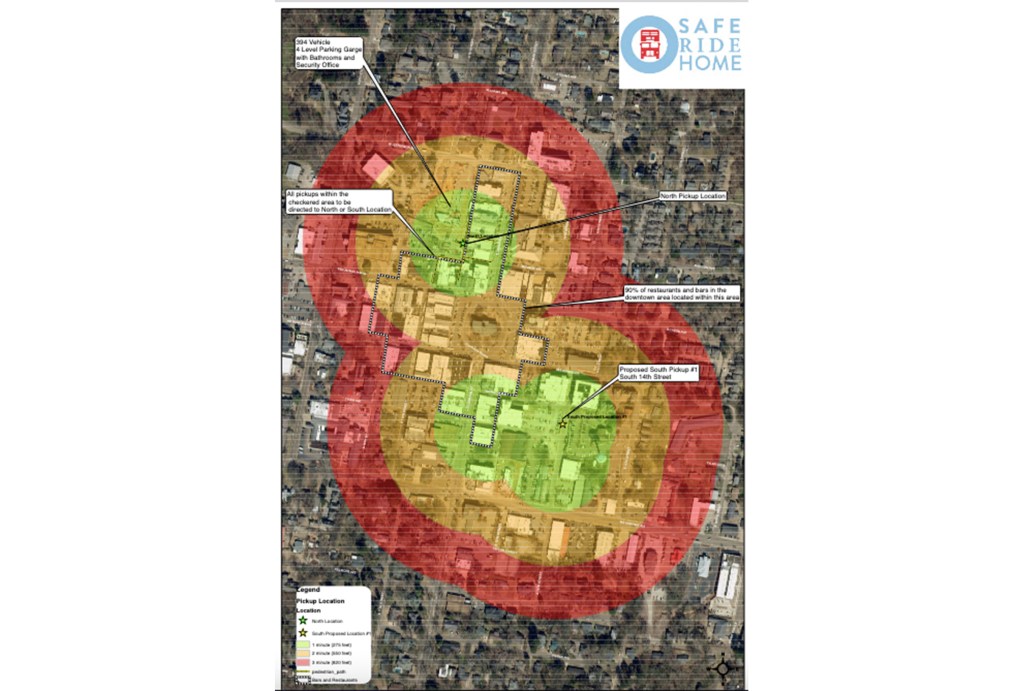 The City of Oxford is considering the designation of two pick-up and drop-off areas on the north and south sides of the Downtown Sqare for taxi cabs and ride-share companies. (City of Oxford)

Catching a ride-share in Oxford’s Downtown Square could get easier thanks to a new ordinance being considered by the Board of Aldermen.

The Oxford Board of Aldermen are considering a new ordinance that would create two designated spots for taxis and ride-share vehicles to drop off and pick up those coming to the Square. A first reading of the proposed ordinance was heard during the board’s June 1 meeting.

If approved, the new ordinance would apply to all taxi companies and private ride-share companies, including Uber and Lyft.

The proposal is designed to create a more pedestrian friendly Downtown Square while providing safety for riders and causing less congestion along the Square with cars stopping to wait for their riders. All vehicles for hire would be required to use the two designated spots for pick-ups and drop-offs between 7 p.m. and 3 a.m., seven days a week.

The two proposed locations are next to the downtown parking garage and on 14th Street next to Harrison Avenue and Tyler Avenue. Each spot would be marked for three vehicles at a time, though there is potential space for up to 10 vehicles in each location, according to Mark Levy, who is the director of special projects for the City of Oxford.

“The areas were selected due to the ability to queue several vehicles in a well-lit, secure area,” Levy said.

During a work session last month, Mayor Robyn Tannehill said the number of taxi companies and vehicles used for each company were down compared to eight years ago, when the taxi ordinance was put in place. In 2013, Oxford had 23 taxi companies and currently there are 13 companies. Most of those companies only have one vehicle. The number of drivers has also decreased from 106 to around 23, currently.
Tannehill mentioned that one taxi company owner spoke to her recently, telling her the only benefit currently to having a taxi service in Oxford was for the reserved parking spots on the Square and that the city’s laws and mandates on taxis were too strict, causing the decrease in taxi services available.

“As we transition to this new transportation hub by the downtown parking garage, those reserved spaces would go away,” Tannehill said. “I thought their argument was very good: that was kind of the one perk to having a taxi company was that we had these reserved spots.”
Local taxi drivers are required to apply for a permit for their vehicle for $500; have their vehicles inspected by the Oxford Police Department; submit to criminal background checks; and carry insurance no less $100,000 for the death or injury to any one person, $300,000 total public liability for any one accident and $100,000 for property damage.

A second reading and public hearing for the proposed ordinance will take place during the Board’s June 15 meeting.