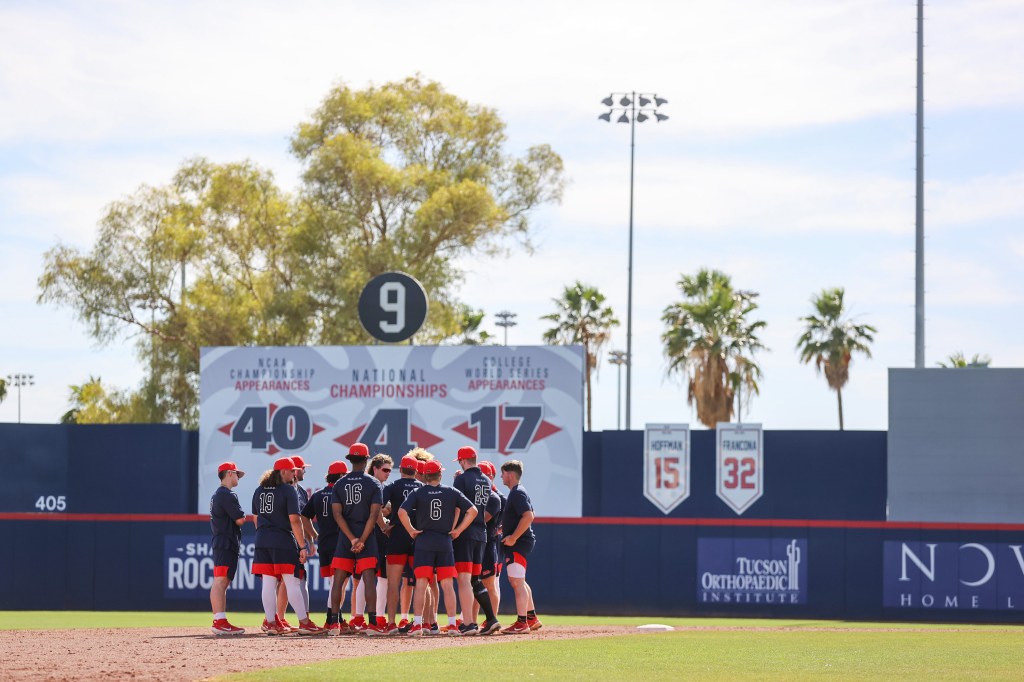 The Ole Miss baseball team meets during practice at Hi Corbett Field during the NCAA Super Regional at the University of Arizona in Tucson, AZ on Thursday. (Joshua McCoy/Ole Miss Athletics)

When Tim Elko stumbled behind the first base bag and crumpled into a heap on April 5, it felt as if all the goals and hopes of the Ole Miss baseball team crumbled with him.

The Rebel captain was coming off a career month at the plate in March, putting up obscene numbers, earning a National Player of the Month honor in the process. The slumping Ole Miss offense was rounding into shape to match the power pitching of Gunnar Hoglund and Doug Nikhazy.

When Elko went down, tearing his ACL, it signaled one of the worst stretches of baseball in program history. The Rebels went on to lose four straight Southeastern Conference series in April.

Just over a month later, the Rebels suffered another setback. In the series opener at Texas A&M on May 7, Hoglund threw less than 20 pitches before coming out of the game in the first inning. A diagnosis the following week revealed the Rebels Friday night starter had torn his UCL and would miss the rest of the season to undergo Tommy John surgery.

With Sunday starter Derek Diamond relegated to the bullpen after shaky starts, the Rebel pitching staff turned to Nikhazy as its anchor on the mound.

Drew McDaniel was tabbed as the Sunday starter, and stabilized the pitching situation for a time, but without Max Cioffi in the bullpen — who was lost for the season with a UCL injury of his own — the Rebels were using a depleted and sometimes unreliable bullpen outside of Taylor Broadway.

April turned into May and the Rebels got back on track with a sweep of South Carolina and winning the final two regular season series against Vanderbilt and Georgia.

Heading into Hoover and the Southeastern Conference Tournament, Ole Miss looked like a team that would possibly make a quick exit. Instead is the Rebels got much-needed performances from McDaniel, Diamond and Tyler Myers and found themselves in the semifinals.

The lengthy stay in the SEC tournament solidified the Rebels chance to host a Regional, which they did for a second straight season.

During last weekend’s Oxford Regional, Elko continued his legendary comeback story that started a month earlier when he hit a home run against Texas A&M as a pinch-hitter, weeks after tearing his ACL. He hit two grand slams in the Regional, solidifying his spot as the Most Outstanding Player for the weekend.

Nikhazy continued to carry his team on his back, throwing nearly 120 pitches on Saturday against Florida State to send the Rebels to the regional final, then returning in Monday’s do-or-die game against Southern Mississippi to keep Ole Miss alive.

Now, the Rebels find themselves two wins away from Omaha as they take on No. 5 National Seed Arizona in the Super Regionals. A team that looked dead to rights just a month and a half ago has rallied around some of the worst setbacks a team could face in one season.

Ole Miss may not be Chumbawumba, but every time they get knocked down they get up again. You might never keep them down.

COLUMN: Covering sports in a pandemic is a surreal…