‘Never too old to fall in love’ 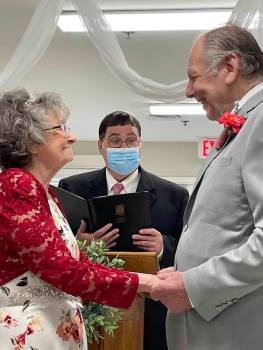 Lorrett and James Ray said their vows in front of friends and family at Oxford health and Rehab. 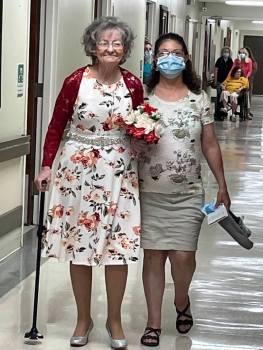 Loretta says she wore her slippers halfway to the altar, then switched into silver shoes for the ceremony. 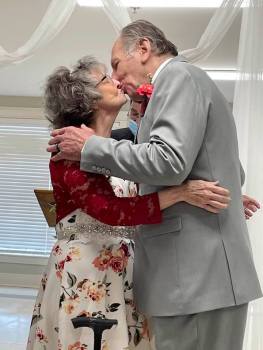 The couple shared a sweet kiss as husband and wife. 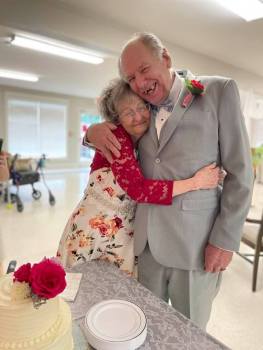 The couple plan to move out of the nursing home and into an apartment together. 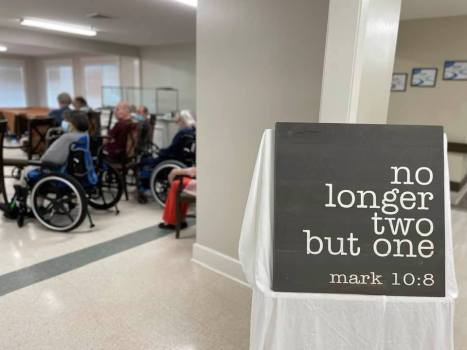 Like many newlyweds, Loretta Ray can pinpoint the moment she knew she would marry her husband, James Ray.

“The third or fourth time I saw him, I was going to get sodas out of the kitchen and he was standing out in the hall,” Ray said. “He had his arms out for a hug, and that was it. He said it was the best hug he had in 30 years. […] That was it, we were inseparable. One day, he woke up before I was awake and he laid down in the bed and slept with me. I said, ‘They’re going to kick us both out.’ But they didn’t. And we spent just about every waking hour together after that.”

In many ways, the couple is the typical picture of newly-married bliss. What sets them apart is the setting of their love story—Oxford Health and Rehab. The two, who have plans to finalize their move to a nearby apartment complex later this month, met while they were both residents at the facility and celebrated their love by tying the knot in a ceremony there on Saturday, June 5.

“We want their last days to be happy,” said Karen VanWinkle, the activities director at the home. “A lot of people don’t ever leave the nursing home, so this is a success story because they met and fell in love, and now they don’t live here because they have each other.”

VanWinkle said the staff at Oxford Health and Rehab sprang into action following James’s proposal, preparing for a celebration of the couple at the place their love story began before the newlyweds began their next chapter.

“We had just finished playing a game, he got down on one knee and proposed in front of all of [the residents] with the ring,” VanWinkle said. “Everybody was tickled, and we knew what came next was the wedding. They didn’t want to wait too long.”

Leading up to the ceremony, residents at the facility celebrated the couple with a wedding shower and recreation activities themed around the upcoming nuptials.

“They’re starting from scratch,” VanWinkle said. “Neither one of them have anything, so the week before the wedding here in the facility we gave them a bridal shower. It’s fun starting over, being like teenagers finding things from their home because they don’t have anything. We’ve had a couple of nurses who donated table and chairs, couch, loveseat, that kind of thing.”

The day of the wedding, staff came together to make the day as special as possible for the couple. The wedding cake was prepared by a therapist at the facility, and flowers, fresh hydrangeas cut from the bushes surrounding the facility, were prepared by a Certified Nursing Assistant (CNA) that helps to assist the bride. Another CNA walked the bride down the aisle.

“My CNA Lena brought my breakfast in one day and said, ‘I have adopted you as my mother, and I will be walking you down the aisle’,” said Ray, who has no children. “I walked halfway down the hall in my house shoes, and then put my silver slippers on and walked the rest of the way.”

The wedding was followed by a reception and was well-attended by family, friends, staff, and residents alike.

“The wedding was simple and sweet, and just perfect!” the facility said on Facebook. “The newlyweds are so happy, and it just goes to show that you are never too old to fall in love!”

Ray says that although starting over is nerve-wracking, her new future is exciting because of the person she now has by her side.

“He’s the loveliest man I’ve ever known,” Ray said. “It gets the whole picture. He takes care of things, he takes care of me. I’m very independent, so sometimes I think he overdoes it, but I’m like, ‘well, heck, I’ll just sit down and let him do it’.”