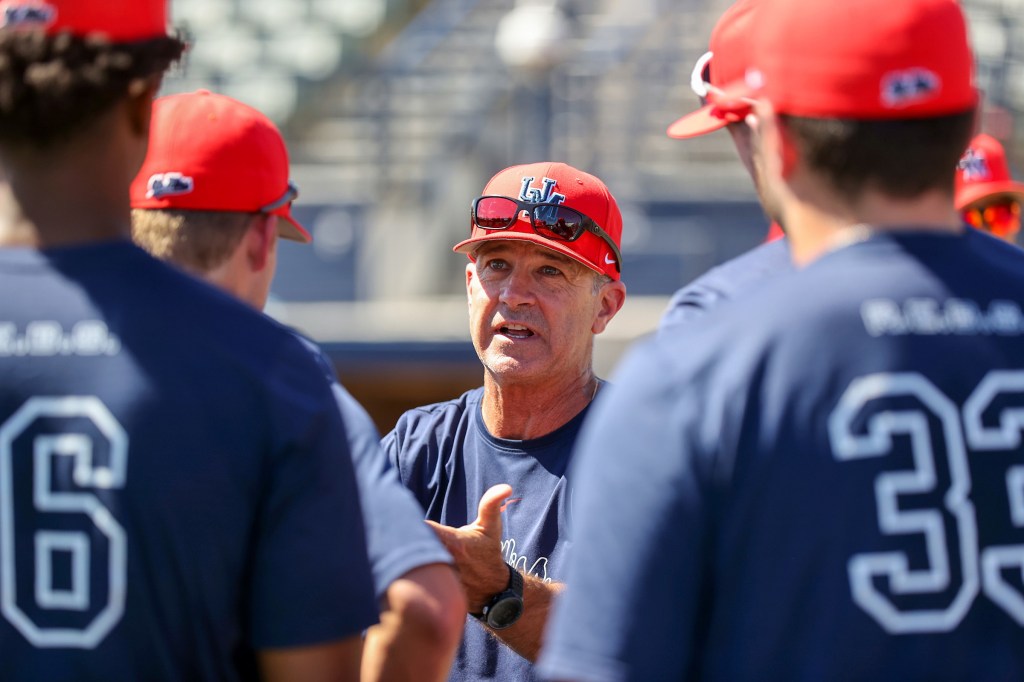 Ole Miss baseball head coach Mike Bianco speaks to the team during practice at Hi Corbett Field during the NCAA Super Regional at the University of Arizona in Tucson, Ariz. The Rebels were elminated on Sunday in a 16-3 loss. (Joshua McCoy/Ole Miss Athletics)

For a second straight season the Ole Miss baseball team ends up one win away from Omaha.

The Rebels fell to Arizona, 16-3, on Sunday in the deciding game of the Tucson Regional. The Wildcats advanced to yet another College World Series while Ole Miss once again just misses out, ending their season at 45-22.

Ole Miss reached a Super Regional for the second straight season and third time since 2014, when they defeated Louisiana-Lafayette to reach the College World Series for the first time in 42 years. In 2019, the Rebels forced a third game against Arkansas in the Fayetteville Super Regional only to fall to the Razorbacks.

Since Mike Bianco took over as head coach in 2001, the Rebels are 7-15 in Super Regional games and 1-5 in deciding game threes. Being the bridesmaid and not the bride more times than not is not lost on Bianco.

“It’s not a secret we’ve struggled in (Super Regionals),” Bianco said following Sunday’s loss. “We’ve been in some, though. We’ve been in seven supers in the last 15 or so years. That’s one or so every two years and we’ll keep banging on the door until we get through again.”

In the first and third games against Arizona, the Rebel bats struggled against the Wildcat pitching with a combined six runs off 11 hits. Arizona scored a combined 25 runs off 33 hits in those victories.

In the second game, which Doug Nikhazy got the start for the Rebels, Ole Miss recorded a team-best 16 hits in a Super Regional for 12 runs to force Sunday’s do-or-die third game.

When the Rebel ace took the mound in the latter stages of the season, especially after Gunnar Hoglund went down with a torn UCL, Ole Miss seemed to feed off Nikhazy’s energy. On nights when Nikhazy did not pitch it seemed to be a struggle at times at the plate and on the mound.

Now, as Ole Miss turns the page to 2022 knowing they will more than likely be without Hoglund and Nikhazy, who should get their name called in next month’s MLB Draft, those returning are tasked with trying to regroup and find their way back to a Super Regional and break through to Omaha for the first time in eight years.

The pitching staff may not be the only group that looks very different come next February. It is unknown is Sunday night was the final at-bats for Tim Elko and others in a Rebel uniform. Those decisions will be made in the coming days and weeks, but what was a potent offense many times during the season could have a very different make up in 2022 as well.

Changing of the roster is not the only thing people will have their eye on as there could potentially be a change at the top of the program. With LSU head coach Paul Mainieri retiring this season, Bianco’s name has been at the top of the list of candidates in a lot of people’s minds to take over the program and return to his alma mater.

The job opening in Baton Rouge was not mentioned or discussed in Sunday’s post game press conference with Bianco, as he was looking towards getting the offseason started quickly. Player exit meetings will begin Monday once the team returns from Tucson and assistant coaches Carl Lafferty and Mike Clements will hit the road shortly after to recruit for the first time in nearly a year and a half.