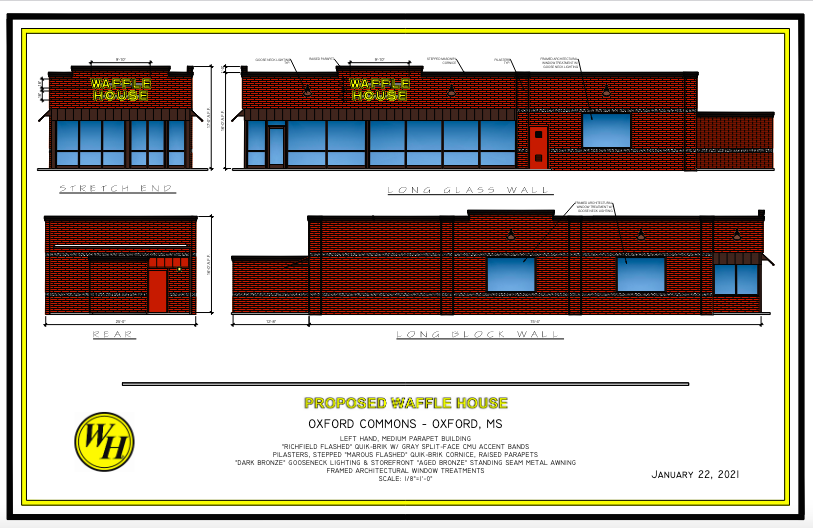 A rendering of the exterior of the Waffle House at Oxford Commons. The Oxford Planning Commission approved the final site plan during Monday's meeting.

One of the final hurdles to Oxford getting its first Waffle House was cleared on Monday.

The Oxford Planning commission approved the site plan for the Waffle House at Oxford Commons during the June meeting with little debate despite opposition to the restaurant’s location in the months leading up to the meeting.

Last year, the Waffle House site was approved along Ed Perry Boulevard between Highway 30 and Sisk Avenue. Since then, the restaurant opted to move south on Ed Perry and will now be located across from the new El Charro Mexican restaurant at the Sisk Avenue roundabout.

The restaurant’s new location drew opposition and criticism from residents in the Oxford Commons community. An appeal of the Planning Commission’s decision in March to approve a special exemption and a variance request by Waffle House was presented to the Board of Aldermen during the April 20 meeting. More than 60 names were attached to the appeal, citing potential traffic issues that could arise from the restaurant’s close proximity to the roundabout and the Highway 7 north exit. The aldermen ultimately upheld the Planning Commission’s decision.

During the discussion of the appeal, Alderman Janice Antonow requested when the final site plan was up for approval that it be moved to the public hearing portion of the Planning Commission’s monthly meeting.

“That concerns me a little bit, that there’s so much interest in this development that the public won’t have any way to review or add input into the site plan,” Antonow said during the April 20 meeting.

With the item moved to the public hearing portion of Monday’s agenda, no public comments were made in favor of or against the Waffle House when those in attendance were given an opportunity to speak by chairman Brian Hyneman.

When speaking to the EAGLE earlier this year, Waffle House Real Estate director Drew Joiner said they expect the Waffle House to be built and completed within the next couple years.